What if we collected everything we knew about the conditions that allow our people to thrive, mixed it with all that we’ve learned about humane alternatives to capitalism, and added in our ancestors’ wildest dreams? What if we sought to build a network of pragmatic dreamers, radical space builders and embodied visionaries growing the conditions for the dopest possible worlds in the here and now? What if we sought to till the soil of radical movement ecologies based in healthy relationship with each other and the land?

What if we did all of that on a gift economy and outside of non-profit structures?

Hey! My name is Aaron Goggans. I am a grammatically challenged poet, independent scholar, movement ecologist and activist monk based out of DC by way of Chicago and Rural Colorado. I've been a part of movements for over a decade now. I have done a lot of work around building solidarity within the Movement for Black Lives as well as work in the labor movement and peace movement. If I'm honest, I've hit a wall with the way we work in the U.S, even in movement spaces.

I can no longer stomach the foundational assumptions of American work life (even for consultants): that just because you can produce more you should, everything important must happen now, your worth is based on what you produce, the goals of your work should be controlled by whoever controls the money.

The work I'm most proud of, and that achieved the greatest impact, has been the work I have gifted to communities that welcomed and loved me. I have rarely received money for this work which often made it unsustainable. This unsustainability sets me up for burn out which leads me to lash out at the people I'm working with. When money enters the picture how everyone involved thinks about the work shifts. Suddenly, putting a project on hold because life happened is unacceptable. Everything needs to happen now and I have to prove I'm worth the money. Eventually you end up doing things because your contract or job description said you should even if it’s not the right thing or the community doesn't have the capacity to receive it.

So I am asking you to do something a little unconventional, though I know I am joining others who have taken this path even earlier than me. I'm asking you to take a leap of faith and support me moving through the world as semi-nomadic dream gardener who is exiting the existing economic structures. I want to offer my skill, vision and knowledge to projects that might bear fruit towards my ultimate goal: a world where everyone can get their needs met with dignity. I want to work to plant seeds of love and rigor based on the framework I helped develop called Liberation Logic and help move as many projects into alignment with Liberation as possible. Eventually, I'd love to gather enough resources to support other Dream Gardners around the way until we become a network of revolutionaries tending to the most promising seeds of liberation. 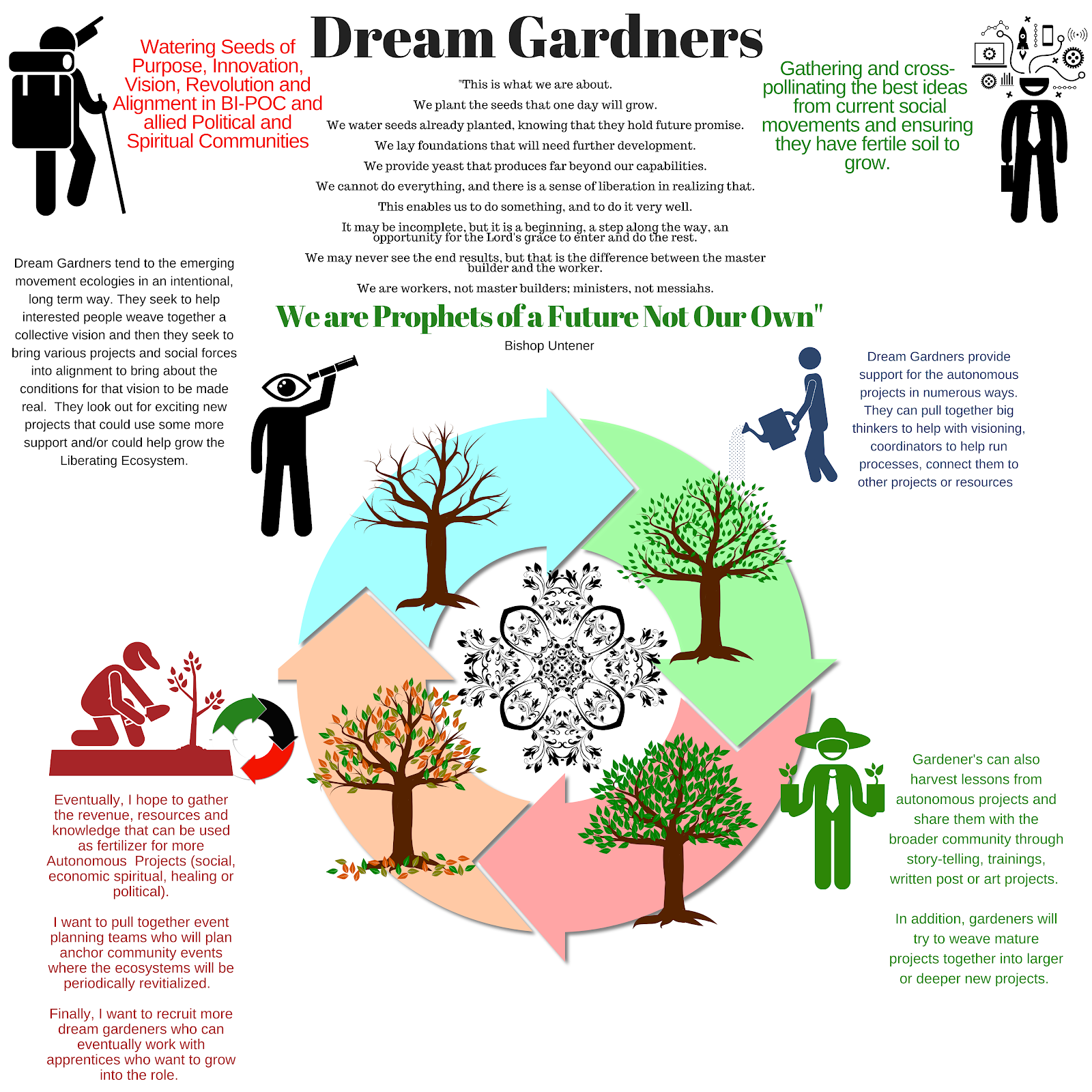 I am not sure where this journey will take me and I can't promise what the outcome will be. I know that I will continue to make meaningful interventions in movement formations that align them with liberation. I will seek to plant seeds we can later harvest as our political situation worsens as well as develop networks that can be the basis for what comes next. My goal is to find people who want to nurture radical dreams with me and use my network to help support them financially as well. My hope is that enough people have already found my paid work,my movement work,workshops and writing useful enough to have sufficient faith that supporting my work with money will benefit not only me!