is creating their way through cultural trauma.

A Bird Without Ears 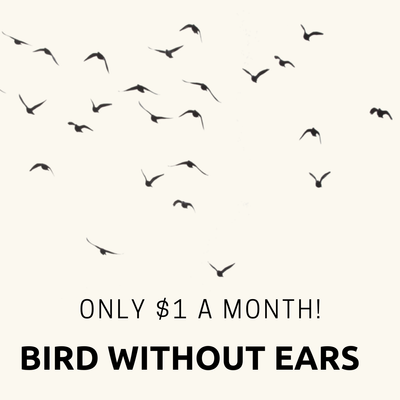 $1
per month
Join
or save 15% if you pay annually
You want to support Adeem the Artist in his endeavor to write emotive, evocative songs but you don't really want to listen to them. 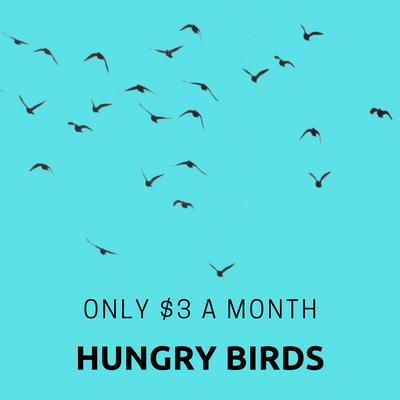 $3
per month
Join
or save 15% if you pay annually
You're a bird who wants in on the weekly songs. "Give them to me," you say, "Chew them up and spit them into my mouth please mama adeem." 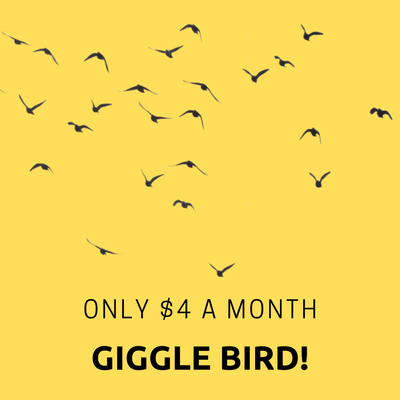 $4
per month
Join
or save 15% if you pay annually
You're a bird who wants the weekly songs but you also want some laughs so imagine that I've regurgitated some softly chewed worms into your mouth but you're kind of bored so you're like OK that was a fine dinner but how's about a little show to go with dinner? here's a tiny monthly podcast.

About Adeem the Artist

Welcome to the flock of redneck poet & makeshift songster Adeem the Artist. The first collection of songs I wrote and recorded was in 2004 and since then I’ve mostly been trying to get better at it. There is space here to be occupied by folks who are interested in my songs or in my perspective and, in turn, space for me to be exposed to all of your magnificence.

When you join the flock you will receive your official flock badge (a vinyl sticker) for you to proudly display on your bicycle, automobile, or water jug of choice. You'll also have immediate access to all the Sundy Fixin's and Birdcast's so far right at your fingertips. Hear new songs weekly with a Sundy Fixin' or hear me bullshit with a pal over a Birdcast.

Adeem Maria (they/them) is a seventh-generation Carolinian, a makeshift poet, singer-songwriter, storyteller, and blue-collar Artist. Blending a homegrown affection for Country Music with the emotional turmoil of alternative folk in the early aughts, they have created a unique brand of Americana that pays homage to John Prine and John Darnielle (of The Mountain Goats) in equal parts.

Imbued with the ancestral traces of southern music and colored by a palette ranging from lo-fi anti-folk to post-punk, the songs traverse the vast compass of human emotion. Whether opining on the disparity of “hooch” and “booch” in the collision of generations or straddling the duality of being a “blue collar boy” who is a “complicated dame,” Adeem excavates unwonted stories of the forgotten south.

Every Sunday, I'll be releasing a new song. Could be brand new, hot from the cast-iron skillet, or a new recording of an older song, a rewrite, a cover, or a deep cut from 15 years ago I stumbled across and decided I wanted to share. Sundy Fixin' is a hodge podge: an exploration of the music that's defined my journey so far and my uncovering more of what it means to be in & of Appalachia.

The Birdcast is a podcast that I will be releasing once a month. A few years ago, I found myself in a friendship with an old timer named Bob. I was working as a CNA and I would go make eggs and bacon for Bob and we would watch the birds outside on the feeder. Bob called me Kyle because the company I worked for insisted on putting my government name on my tag.

I tried to quit but Bob wouldn't let me and he would often tell me I was like a son to him. I considered him quite close even though I never let on that Rush Limbaugh was not the hero to me that he was to Bob. I suspect he knew I was putting it on a little with him by the twinkle in his eye when he would say particularly salacious things to me. Bacon & eggs out in Strawberry Plains became a refuge for me that I miss dearly.

The Birdcast is now a space for me to revisit the lazy weekend dialogue of southerners at the corner store. I miss my bird chats with Bob & the winding path of conversations with no destination; like road trips to nowhere on switchback mountain roads. I'm gonna use it to catch up with some friends about what they're learning or reading or laughing about & maybe get to know some new ones.

This nest is wide enough for birds of all feather and squawk. Join us for Zoom Conference live shows (think house concerts from your mobile or computer), monthly podcasts, weekly music, and general banter ranging from poetry to reflection on everything from Apostasy, food, Queer Issues, Social Justice, Star Trek, and the importance of hydration.

Recent posts by Adeem the Artist