The Starter Pack
$1
per month
Join

For the small amount of $1 you will have access to our updates and progress as we move towards building our program.

Out of the Abyss
$5
per month
Join

For this level you will receive;

• Some behind the scenes on our process

The Rise of Tiamat
$15
per month
Join

Pocket DM
We want to make the immersion of Dungeons & Dragons combat more accessible, affordable, and portable. As a DM the cost of having miniatures and maps for your encounters has the potential to be insane. And if you’re like us and like to host sessions all over the place, you could end up needing a suitcase for all your notes, books, dice, and minis. What if instead you could fit all that on just your tablet, in a way that tracked creature stats and abilities? What if you could also build a map to allow your players to see the world as you see it, and track their place in every encounter? That’s what Pocket DM is for, allowing you to take your game anywhere you want.
Who are we?
We’re a small band of D&D players who masquerade in our real jobs as software developers and graphics designers. This project is lead by Nick, our creative lead and animator. Assisting him is Rick, Richard, our software developers, and Sepi, our UX & AI designer. While this a relatively small team, we’re all passionate about D&D.
What are we building?
We want to put together a set of tools aimed to assist in-person D&D games. Our focus will be on the role currently played by hand-drawn maps and miniatures. Unlike existing products on the market, we plan to build a 3D realization of this element of the game. You will get the immersion of watching your virtual miniature fight, while still incorporating the much-loved roleplay and improvisation of D&D.
<figure> 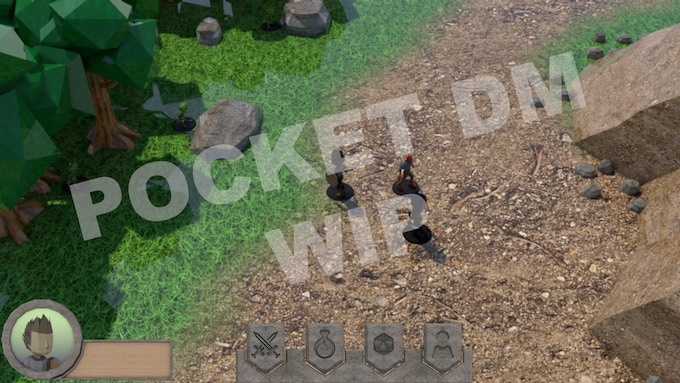 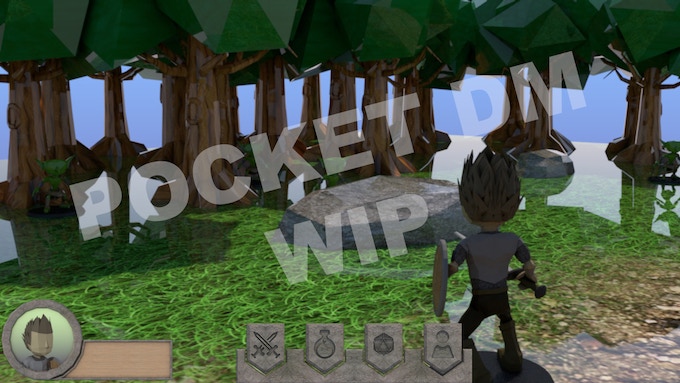 </figure>
Our first release will be on PC and tablet platforms as a primarily offline app. Our intention is that a single tablet with the app can replace the map at the center of a D&D table.
We will include a character creator, assets and maps to support the D&D 5E ruleset. Depending on time constraints, this may start as only a subset of what is available in canon, but we will endeavour to provide updates and expansions.
We are also interested in including some quality of life features, including:
1. Integrating with other devices at the table, E.G. phones, to allow those players easier control over their character on the map.
2. Some automation over the number crunching during battle. More information will be available as we start to close in on completing release 1.0.
When do we plan on releasing this?
We don’t yet have a release date for version 1.0 as release dates on Kickstarter are famously inaccurate, but it is safe to assume no less than 2 years. We do plan on providing updates at least every month, with an extremely early alpha to backers within the first year of development.
What will the money be used for?
Developing a tool of this nature and bringing it up to production quality will be costly. Fortunately, we have expertise in both software design and graphics. But we are still a small team and we lack expertise in other areas like sound design. The funding will help us cover our gaps where they exist, as well as to purchase the software/hardware needed to both build the project in it’s entirety and test it on all supported platforms sufficiently.
Risks and challenges
Each of us working on this project also have full time jobs, so doing this is a passion project that will take up what precious free time we once had. We are fully aware that the project is ambitious and so comes with the risk of delay. We feel the risk of not releasing anything at all is slim, the challenge is how much of the game in terms of assets can we cover by the milestones we set out.

Each of us working on this project also have full time jobs, so doing this is a passion project that will take up what precious free time we once had. The funding is for software and equipment to allow us to create this project with as few problems as possible. Each stage of the project will need to be tested rigorously, and with coding and bugs involved it could take more time than expected, but we aim to hit our deadline and keep you informed every step of the way.