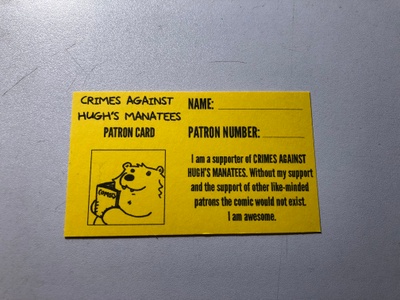 My name is Hugh and I have been making the comic strip Crimes Against Hugh's Manatees since March 2010.

When I started the comic strip I was a stay-at-home parent of two small children and I had a lot of free time on my hands. Now, ten (!) years later, I have three children, all of them school age and my free time right now is very limited.

The primary goal of this Patreon campaign is to provide some regular income (no matter how small) to help insure Crimes Against Hugh's Manatees continues on a weekly basis.

In March 2016 after making the comic a daily comic for six years I slowed my work down to posting one larger comic a week. This brings me to the secondary goal of this Patreon campaign: TO GET BACK TO MAKING CRIMES AGAINST HUGH'S MANATEES A DAILY COMIC STRIP.

In order to make the comic daily again I would need to work at least 40 hours a week on comics. I have set a goal of 1200 a month to make the comic appear daily again. I know this sounds like a lot but it's a little less than the min. wage here in Missouri for 160 hours of work.

Thank you for reading! I hope you consider helping out!