ChrizStorm is creating content you must be 18+ to view. Are you 18 years of age or older?

I play video games on YouTube as well as live stream games from time to time. By pledging you really help me create more regular content. Thank you all so much it means the world to me! Also below is information on a visual novel that I am working on in my spare time, all info about that is below. 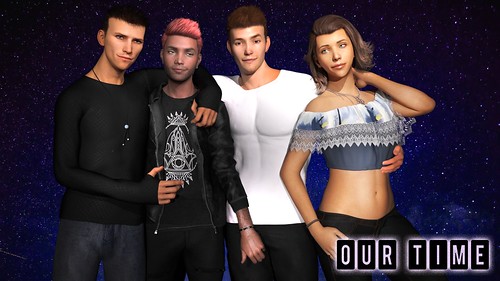 *First playable demo/introduction expected on or around December 5th*

Feel free to hit me up on any of my social media accounts!
Twitter
YouTube
Discord
itchio


So here it is, the story I've been thinking about creating for a little while, and I'm genuinely excited to work on this. That being said this is really going to be a passion project for me that I'll be doing on the side, so updates will be on a pretty slow basis probably. I will always keep you up to date though, this has taken me back to being in creative writing class as a senior in high school, & I've got so many ideas in my head that I hope I can create something somewhat cohesive. Also in that same vain, I am obviously not a professional writer or anything, but I'm just trying to have fun in creating my own narrative, and I hope you'll find some parts of it enjoyable and relatable. So this will be far from perfect, and will likely be rough around the edges for a while as I learn and gather new experience doing something new. It is going to have open and honest discussions about sexuality and relationships on different levels, and while sex won't be a main focus in the story, there will be some NSFW stuff from time to time, when the story calls for it, but I'll always put a disclaimer in such cases.
Multiple sexualities will be displayed throughout the story.
The character descriptions are listed below for each main character, listed below is also the premise, just a teaser of what I'm thinking so far. Also things might be subject to minor changes as I get better and progress the story, especially since This is a pretty basic concept at this point. This visual novel will always remain free to play as, like I said I have no experience and am learning as I go, however updates will be posted to Patreon about 2 weeks before going public, as an extra thank you for the support. Other than that the game will always remain completely free to play while I work on it, as like I’ve said this is all new to me and am learning.

I do plan to implement periodic choices to give a little more control to you, the reader/player. These choices may start off simple as I learn but may eventually lead to various endings, depending on how the story grows & develops. 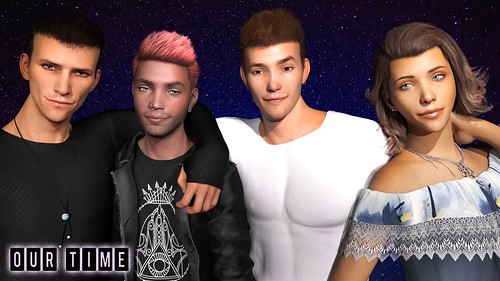 April, Winter & Theo move out of The United States, to get away from their respective toxic family and neighborhood, that always pushed them down. Theo was kicked out of his parents at 18 & just so happened to meet two 17 year old fraternal twins, fast forward over 9 years, they are great friends. Theo comes up with the crazy idea, and gets the twins on board, to start fresh and see what else is out there, in the world of possibilities. They all agree to share a flat together to start their new lives somewhere totally unknown to them. To their surprise, Theo made one slight overlook when he made the arrangements, someone (Zeke) is already living in their new home. They all come together and agree to share the 3 bedroom space amongst the 4 of them, even if someone might have to share their bed. They all take one day at a time, and eagerly await to see where life is going to take each of them, and what this journey will mean for their understanding of themselves and the relationships with those around them.

Zeke
Age: 28
Pronouns: He\Him\They\Them
Zodiac Sign: Aquarius
Enjoys: Music, Exercise, Photography
Zeke has lived in the area since he was born, his mom just 17 at the time. He came out as transgender at the age of 18, shortly after his mom divorced his dad. He and his mother have become very close over the last decade. He lives his life very openly and often times doesn't worry much about what might happen next, he is unapologetically a "do what I want" kind of guy.

Age: 27
Pronouns: He\Him\They\Them
Zodiac Sign: Scorpio
Enjoys: Exercise, Writing, Video Games
He has lived with his grandparents since his parents kicked him out as a teenager, for "not being what we envisioned." He has been longtime friends of Winter & April, and is the one who came up with the plan to move out of the country. He has always been on the shy side, especially around multiple people, but if you connect he always has a lot to say. That being said he is a constant over thinker and is easily stressed out.

Age: 26
Pronouns: He\Him
Zodiac Sign: Aries
Enjoys: Hair, Fashion, Photography
He is Winter's fraternal twin, the older of the two, but only by 10 minutes. Moved out of The United States with Winter & Theo after their respective families became too overbearing with their ignorance. He is not someone who takes himself or life all that seriously all the time, and really just wants to enjoy himself. He is a total jokester and is constantly laughing or trying to make everyone else laugh.

Age: 26
Pronouns: She\Her
Zodiac Sign: Aries
Enjoys: Reading, Nature, Joking Around
She is April's fraternal twin, and the two have been pretty inseparable in their lives. Moved out of The United States with April & Theo to escape their various toxic family & neighborhood together. She is totally focused on her career after the big move out of the country, and is very ambitious, and at times maybe a bit of a loner. Though she will knock you down a peg, or a dozen, if you say anything stupid.

I hope you enjoy what my random brain comes up with and appreciate any and all support, whether it be donations on Patreon, or just feedback after going through it, as this is a totally solo project, and it really does all mean the world to me!