is creating colorful fine art in traditional and digital media

Tier 1 - The FORCE OF EVOLUTION

$2
per month
Join
Join me in the creative process!  Be part of the Force of Evolution by voting for your favorite images in tournament style competitions. Winning images will be used to spawn the next generation of artwork.

Right now I’m creating a world of Cabbage Whimsies. Whimsies are interesting personages and designs that emerge as I explore symmetries in previously developed images.  Meet some Whimsies  at my website - and while you're there, vote! We're just starting Round II.

Thank you for your support, and especially for taking the time to participate.
Special EARLY BIRD bonus for the first 50 Patrons! Digital Wallpaper of the Six Top Winners that were made into greeting cards! 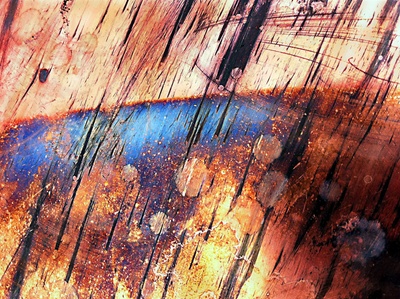 $5
per month
Join
In addition to Cabbages, I work with many other categories of images. As the Force of Nature, you vote to influence which categories and images will be developed next. (As an example, the largest category is SHINY THINGS)

HISTORY - I’m one of the first artists in the world to make art with computers, but many of the original files no longer exist or are in inaccessible formats. (Giant floppy disks, anyone?) I'm in the process of recovering these historical works, using original files when possible, and otherwise reconstructing the history and art by digitizing slides, negatives, magazine articles, show catalogs, and so on. I have boxes of archived materials to work through, and Patrons' support will make this possible. I will share with you the many files of this historical work. Take a look at some of the EARLY WORK . 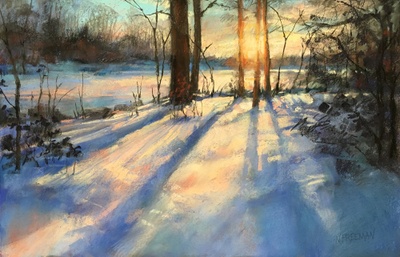 $10
per month
Join
I’ve always made my living as a painter - check out my PAINTING PORTFOLIO.

For Patrons who want to get more involved in both digital and traditional media, you get all the digital benefits of the Tiers 1 & 2, and image files big enough to make prints as they become available. PLUS step-by-step online pastel lessons (like this), access to speed painting (like this) and pastel demo videos (like this one, filmed by The Art League), and early access to pastel paintings, sketches, and other physical works in the shop.

Become a Patron to enjoy colorful artwork and participate in the artistic process! I am currently focused on three digital projects, and two upcoming Pastel Projects:

1) The Evolution of Cabbage Whimsies
With a background in science, I’ve always been fascinated by how the forces of nature produce random and infinite variations based on underlying structure. I use crowd-sourced decisions as the Force of Nature to guide the evolution of my work across various projects. Patreon is the ideal venue for this community-based approach to image creation. It lets me reach people who want to support creative efforts, and also want to join in the creative process, so we can build a community around the evolution of the work. The more Patrons can get involved in the process, the more powerful the community becomes as a force of artistic evolution.

The Evolutionary Projects use crowd-sourced "survival of the fittest" decisions to evolve generations of art, using a tournament-style competition. Patrons vote for their favorite cabbages, which I then transform into richly colored and textured artwork. My current focus is Whimsies, creatures that emerge from exploring symmetries in source images. The image strip below shows a source image - the ‘White Caps’ cabbage artwork, on the left - and three of the Whimsies that it produced.

"White Caps" cabbage artwork and some of it's Whimsies

To transform the Elimination Round winners into finished art, I’ll use a variety of methods – digital painting, traditional painting, collaging, iPad apps, and so on. They’ll be optimized for on-screen viewing, but I’ll also adjust many of the finished works for optimal results as wall art. I will share the Whimsies that are born along the way, and then the evolved cabbage-winners will then compete in future weeks to be selected to produce the next generation.

This project is the successor to my last big digital evolution project, The Cabbage Art & Scarf Invitational on Kickstarter in 2014, a five-month adventure that culminated with the winning designs custom-printed on silk scarves. The image strip below shows some winning cabbage artwork from the Invitational.

2) Bring out the Shiny Things, and Others, Too

My Shiny Things art is all about things that play with light - glass and metal and water, reflections and refractions. Check out the "Copper Dreams" series for an example. This project has been accumulating many finished works that are as yet unseen by the world, so I will focus on sharing these pieces as I finalize them. Check out some images categories in the Shiny Things Portfolio

3) Bring the Past into the Present"

”Cherry Tree" 1993
I was one of the first artists in the world to use computers to make art, for my initial Evolution project in 1984: “Faces”. This was before the Internet, before personal computers, way back when computers could barely display color graphics, and prints were primitive and impermanent. Some of the original files no longer exist, and those that do exist are in formats that are not easily accessible.

In this project, I will try to recover and share these historical works, using original files when possible, and otherwise reconstructing the history (and the art??) by digitizing slides, magazine articles, VHS videos, and show catalogs. I have boxes of archived materials to go through, and Patreon support will make this possible.  Early Work

Speed painting is the most fun I have painting with pastels. (This is not the pre-choreographed and pre-practiced kind that pops up on the internet) The example set above was from ten paintings done in one sitting, two minutes each. Here is a video of that session, sped way up. "REAL SPEED PAINTING: 10 Two Minute Paintings"