is creating Videos, books, and more. 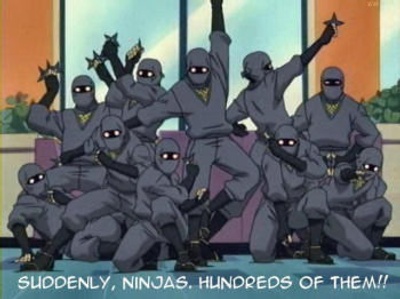 $1
per month
Join
You will get access to all creations (videos, books, blogs, podcasts...everything) a full month before anyone else.

I want to take a moment to thank all the fans and patrons for supporting what we do.  We do this for you!

We are Divine Warrior Ninjutsu.
We teach Ninjutsu and Samuraijutsu. Our main headquarters is the Bujinkan Honbu in Japan, but we also teach ninjutsu from other lesser sources as well. Bujinkan is the largest ninjutsu and samurai organization in the world, and as such, all official paperwork goes through them primarily, with the option to go the other ways also. The Bujinkan is made up of 9 family traditions, 6 of which are samurai jutsu and 3 are ninja jutsu. They are:

Our curriculum is also made up of Shizen Den Ryu Ninjutsu, and Choson Ryu Ninjutsu, of which these fall under a separate banner.
The Headmaster of the Bujinkan is Grandmaster Masaaki Hatsumi of Japan (pictured). His credentials are extensive, to say the least, often being employed by the US Military to train Navy Seals, CIA, and special forces.

The New Brunswick chapter is headed by Jason Steeves. He began training at age 10 and visits Japan regularly to train with Hatsumi Soke and his senior instructors. He is a 13th Dan (13th degree black belt, Jusandan). He also is ex military serving the Canadian Armed Forces as a gunner/assaulter on the Air Defence Anti Tank System, as well as Prison Riot Squad, SCUBA, Airbourne, special detail to the Colonel of several Canadian forces bases, and twice awarded the gold medal in Warrior performance, including sniper training. He is also a certified personal trainer.

Jason is also a university graduate holding an Associate of Arts in Ministry, a Graduate of Theology, and a Bachelor of Arts in Religion, all majoring in Christian Counseling. He has also written a dozen books and produced a few training and other videos as well.
In the private sector, he has worked as bodyguard, captain of the neighbourhood watch, security of federal government projects, and consultant of different security details, as well as CIA training in the United States.

All claims are certified. Remember not to take an instructor's word for it. Always ask to see credentials.

0 of 400 patrons
When I reach 400 patrons, I'll hire someone to produce training videos quicker and at better quality.
1 of 1