Time to Rise and Be Epic! 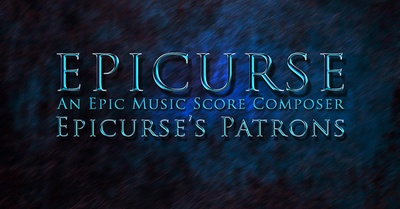 $5
per month
Join
Patrons, together, let's make it an epic journey.
A huge thank you for your support.

Thank you so much for making your way to my Epicurse's Patreon page.

I can't thank my Patrons enough for supporting me and my work! You make this musical journey possible!

My music is free to the world, but with your pledges, I can pursue my dream and passion to be an epic orchestral music scores composer. I would love for you to be a part of it all.

With your pledge, you will unlock my page and will be the first to get it all. My music will always be posted on Patreon first before it gets released to the world.

My story, it is about reaching for that ultimate sound. The sound that gives you an overwhelming feeling of great happiness and joyful excitement. I want each music note to sound beautiful, rich, strong and emotional while defining an epic story. Each track I compose is a result of that sound.

My motto: "You do not learn music, you feel music".

Patrons and comments are welcome.

The Defiance Principle album was my first ever attempt at composing songs with no prior knowledge or experience in music.

Time to Rise and Be Epic!

(Pledges are per month. You can pledge higher amount)