Toss Me a Dollar Change

$1
per month
Join
Wow thanks!

Now that we have connected let's prove it by giving you:

$5
per month
Join
Hey! I appreciate you! I'll draw a shitty sketch of a SFW character or background as a one-time thank you gift!
Examples:  https://imgur.com/a/NKR81Bc

To work this out, you get access to the Discord I will make after we get at least 5-10 other people so it's not weird! A place to talk about art, the comic, etc.!

Anyway, for this wonderful 5 dollar tier, you get access to everything in the $1 tier, but you ALSO get to have a place on the Patron-Thanking Page on the main site that I can edit and credit all of you with your name/internet handle/whatever you want to go by, linked to your social media or whatever!

I'll try to let you know if the name is the same as someone else... then we can have the both of you duke it out somehow

Seven is More than Five

$7
per month
Join
That's a whole lunch for me AND my favorite number, thanks! That's why this tier is just going to be a small upgrade from the previous one!

This means you get all of the first tier PLUS:

If you've stayed for at least two charges, you get a one-time thank you Advanced Sketch commission of whatever you want as a thank you!! Backgrounds and multiple characters.. anything! And yes NSFW ;)))!
Examples: https://imgur.com/a/9yxjKTD

Details will be discussed via Discord if it is up, otherwise through a PM!

ALL PATREON CHARGES ARE PUT ON HOLD UNTIL THE PANDEMIC IS 1000% OVER
You must sub first to get in, and I will refund your payment, and we'll ride this thing together.
---
DON'T CARE ABOUT INERUDITE HILLS? Patreon me anyway for commissions and art requests!
anyway
If you're thinking: I know what Hills are, but what's an Inerudite? Let's start with pronunciation because I like doing that.
in-ehr-oo-dite.
/'ɪnerʊdʌɪt/ if you want to be a fancy linguist. But really, what is it?

Well, erudite means, straight from the googles, "having or showing great knowledge or learning", and inerudite would be the lack of that! Hi, welcome to the Inerudite, the Ignorant, and the Inexperienced Hills! 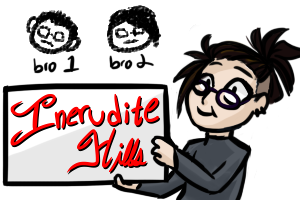 My name is Finley/Finn AKA Fnibble and I've been trying to make this web comic since 2013!
I am the main digital artist and writer for Inerudite Hills, a world my siblings and I have built upon since we were children slinging magic at each other, until I decided to make it into a comic! It's very dear to my heart, and I hope I can do it justice in this web comic!

I hope that with Patreon I will be able to focus more on my comic to hold back real life hounding me for money!

This is just to support me drawing the comic. In return, patrons will obtain benefits such as early access to comic pages, details on the story and world, sneak peeks, bonus art/animations related to the comic, HD+Textless versions of the comics posted, and even more things that will supplement the comic! Some tiers include a commission as well!

Hosted via:
Comicfury |Tapas | Webtoons | Smackjeeves
-----------------------
The Wayward, the Neutral, and the Lonely.
The Angel, the Ghost, and the Devil.
Three beings who live on opposite ends, contradicting everything that has ever been set as fact.
And some cannot stand to accept it.
-----------------------
Inerudite Hills is web comic told via multiple stories each detailing the events and happenings of a supernatural fantasy world. Gods, magic, and monsters included.

If you don't want to Patreon me, you can instead donate viaKo-Fias a donation for some shitty sketches!

You can also follow my 'personal' Tumblr and Twitter if you really want but it'll be lame there. My personal Instragram has almost nothing!

For this first milestone, I'll post the scripts and storyboards for the chapters of the comic on all relevant sites!

We're also looking at deconstructed comic pages, from rough sketch to WIP to line art to flats to full color!!

And!! Streams every other week on Saturdays where I stream art for Inerudite Hills and other various things that people might want to see!!