is creating RPGs and Adventures

You will receive fiction in PDF, epub, and mobi formats, collected together and updated with each new release.

You will have the opportunity to influence the queue and help decide what will be released next for the Patreon.

The Legends
Limited (5 of 5 remaining)
$15
per Game, Adventure, or Story
Join
You will receive everything from the Heroes tier and will be invited to a monthly RPG game on Roll20. Those patrons in this tier will decide what system and what type of campaign they wish to play in, but I'll have the final say.

per Game, Adventure, or Story

My name is Fraser Ronald (given name Fraser . . . always confusing) and I write genre fiction (mostly fantasy, but some science fiction as well) and design role-playing games. My little company Sword's Edge Publishing has produced Sword Noir, Kiss My Axe, Centurion, Nefertiti Overdrive, and Sword's Edge. You can find out more about my game publishing at the Sword's Edge Publishing website. I have had fiction published in On Spec, Black Gate, and Fantastic Stories. You can read more about my fiction writing and reviews at my personal blog, Sword's Edge. I've also been a co-host of two sadly defunct podcasts - the Accidental Survivors which ran from 2006 until 2015 and the Ottawa Game Publishers Podcast.

Even when I'm not crowd-funding new RPGs, I'm constantly working on projects, and this Patreon is a way for me to share those projects. I have RPGs that have been written but not released and adventures that I've completed for both my home groups and conventions that I've never shared. If you have found my previous work of interest, I believe you'll enjoy what I'm cooking right now. The adventures are written for my RPGs, but because those games are simple, abstract systems, they should be relatively easy to port into other systems.

For this Patreon, I will be releasing RPG adventures and short RPGs. Some of the adventures will be designed for convention play, meaning they are one-shots that run about four hours. Other adventures will be longer stories designed as campaigns. The RPGs will be under 50 pages, with simple mechanics geared toward supporting narratives - think more Fate Accelerated or Apocalypse World than Dungeons & Dragons or Warhammer. 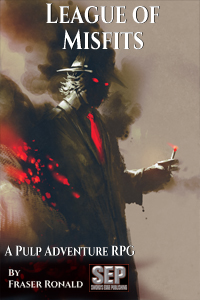 So far, this Patreon has seen the release of short stories, a variety of adventures in different genres and for different systems, and the role-playing games HeadCrushers, the Wall, and Sagas of the Sea Peoples: A Role-Playing Game of Survival in the Late Bronze Age Catastrophe, the Quickstarter for which is available, and which will be Kickstarted in February.

The current project is League of Misfits, a role-playing game designed for pulp adventures. It is slated for release in February 2020 through this Patreon.

So I hope I can count on your support. I'd like to share the stuff I love creating, and I hope they help spark some enjoyment for you.

Note: Most RPG products released through my Patreon will also be sold, though they will not be available to the general public during the month of their release on Patreon. Some products will remain Patreon exclusives.