FutadomWorld the Game - Binding Sim is creating content you must be 18+ to view. Are you 18 years of age or older?

Unbound Male: You have the humble gratitude of the team.
Bound Male
$5
per month
Join

You have access to the patron-only feed where a progress post is released every 30 days, usually at the end of each month.
Boy Toy 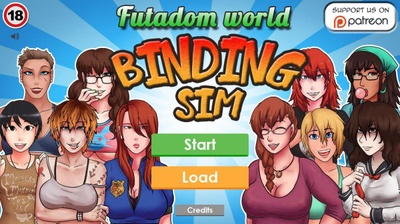 What kind of game is it exactly?


Futadom World – Binding Sim is a cross between a dating sim and a more open-world, sandbox experience. If you're familiar with the flash games Sim Girl or Ganguro Girls, you're on the right track.

But our game is a bit different. Males are the fairer sex in the Futadom World, and your goal is to choose a character among many, and seduce them...before someone else decides you might be better as a slave.

You are a male citizen of the Empire, and as such, you're oppressed and objectified at every turn. It's time for you to hurry up and find love...or something close to it.

To do so, you'll have to study up, get toned at the gym, dress well, work, earn money, develop your sexual skills, and, of course, actually talk to your futa crush.


The story - A strange new age

The story is based on the FutadomWorld universe.

Key to futa supremacy is a quirk of their physiology—their addictive semen. When exposed, males rapidly begin a spiral of emotional and physical dependency upon their futa “feeder”. What’s more, exposure strongly affects intelligence—a male “bound” to a futa in this way is suited for little more than a life of sexual servitude.

Come with us into this world created just for you.


It’s been about four years now since we started working on the game. The very first releases will be quite light compared to what we are aiming at. In the final product, we plan to have more than ten futa heroines you can interact with, all with very different styles and personality, branching quests, random events, bad ends to avoid, and tons of twisted situations to go through.

We are a team of porn-enthusiasts who came together to make a game we were passionate about.

Sacha J. Witt:
An erotica author, programmer, and very selfless lover. Sacha's previous works include A Gift To The Sea, Dicks up for Harambae, and, of course, Honeymoon.
Project lead and writer.

The original creator of Futadomworld: https://www.reddit.com/r/Futadomworld/.
The setting of the game is based on his original work.
Writer.

Bert:
Lead programmer. It turns out Bert was capable of porting the entirety of FutaDomWorld from the original codebase (in GameMaker Swahili) to the current engine (Ren'Py) in under three months. We hired him on the spot.

As the game and some material we give as a reward are for adults only, you must be 18 or older to pledge. Please do not be two kids in a trenchcoat.