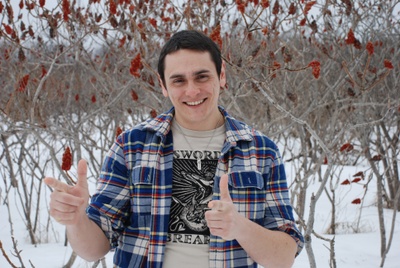 $1
per month
Join
You miscreant. You're directly supporting shitting up the web, you realize that? You realize that's the goal here?

My name's Gianni, I've been voice acting for about ten years in various games and animations. Some popular stuff I've voiced for includes Fistful of Frags, Battlerite, Death Battle, ULTRAKILL, Arte, and much more.

About a year ago, I posted a brief video doing a (mediocre) impression of Duke Nukem, dubbing a few tweets from the amazing Twitter account "@QUOTESOFDUKE" and it spread around quite a bit. I'd been at around 600-800 followers on Twitter for like seven years at that point, but after that video I went beyond one thousand followers. It may not be a huge number as far as the net is concerned, but to me it was a big deal. I thought to myself "These folks followed because they liked this thing, I should keep delivering it."

So not long later, I'd found myself working on the personal challenge of trying to post one voiced meme per day(ish). Looks like we're at over 300 videos now, whoa. I found that this really helped me in a lot of ways. It helped me get more practice in, learn some new tricks, let me voice characters I would only otherwise daydream about voicing, and primarily, help avoid burnout in voice acting, as well as also keep me engaged and having fun with voice acting even if I wasn't being cast in much.

What I did not expect, was that so many people would keep enjoying these dumb videos and sharing them around. Especially because, well, I really love the Retro FPS subgenre and a lot of my stuff was based in and around that. I figured it was a bit more niche so at most it'd be a small crowd, but the Retro FPS community blew me away by both showing up to enjoy the stuff, and also share it around to others who turned out to enjoy a lot of it. I think perhaps my greatest victory is that I've gotten a few more people to get into what I consider to be the greatest games of all time. I originally just started making the videos to post to Twitter and uploaded them everywhere else I could as an afterthought because I figured "eh, might as well" but as of today the YouTube channel is at about 69k subs (nice).

For those who don't already know, I don't run ads on the videos (so adblock away), I upload them to Twitter, YouTube, Instagram, and TikTok and I pretty much straight up tell people that they can take the videos and use them however they want. I really like the idea of creating memes that just enter the weird internet collective. I like the idea of my shitposts being dropped into comments as random replies/reactions, perhaps even compressed to hell and back from being taken and re-taken so many times. I don't watermark them and I do literally nothing to stop people from reuploading or anything. The only thing I often say is that I really appreciate it if folks see one of my videos out in the wild, if they politely mention I voiced it in the comments, that way just in case someone is really curious whose voice it is, they can easily find out. I don't wanna throw a pity party here but I'll tell you, a lot of these "practices" really are shooting myself in the foot. I don't think anybody should do it like this, but I just feel like with the nature of the videos and what I'm going for, I wouldn't feel comfortable doing anything possessive with them. I make them for myself, and then they belong to the world, and that really satisfies me in a way I refuse to give up. In the words of a legendary friend, "my memes are open source."

A major reason I don't try to make these videos a serious income thing is because primarily, I've always regarded myself as a voice actor first and foremost, and not a content creator. In my mind, I should be able to get stable on voiceover alone, and everything else should be gravy. But I need to admit that I haven't been quite as successful at it (YET!) as I was hoping, and the truth is, I'm still not exactly financially stable. Don't worry, I'm safe and alright, but let's just say it's been pretty paycheck to paycheck for a while. I don't wanna be rich, but damn it'd be nice to reliably clear rent without worry. My path in VO is progressing well, I'm so lucky for so many great opportunities I get to keep working on, but I'm not really "there" yet with it. I need to get better and work harder to really earn the security in VO I'm looking for, and I will indeed keep at it. It takes time, especially for someone weird like me who's entirely self-taught via doing random shit on the net, has never lived in some acting hotspot, and squeezing into the industry one inch at a time. I'm getting there for sure. This is my path, and you'll have to kill me to stop me.

Don't worry, I'm not going to stop making these dumb videos any time soon, frankly I think I'm addicted to it. But I figure since I spend so much time on these memes, and I've had so many people express that they want to support my war against humani-- uh, my "work" making "content", I thought what the hell, maybe this can be a way help bolster the accounts and smooth things over. I talked it over with my wife and she convinced me create and actually promote ways people can support me if they want to. In her elegant words, "rent's gotta get fucking paid, Gianni you stupid idiot."

So no, there's absolutely no pressure here, there are no stakes you need to donate for, I'm not threatening to stop anything and I'm not even promising the content will improve if you donate. I think the videos kinda sucking is a big part of the charm, so I'd hate to threaten you for supporting me by saying they'll improve. I know that's not clever and incentivizing, but fuck it, it's the truth. This Patreon is a convenient way to support me for those who want to, and I wrote all of this because I think if someone's going to, they deserve to hear what's up with the shiny new tip jar.

Thanks for reading if you read all this, thanks for donating if you so choose to, but most of all thanks for listening to (and hopefully enjoying) my work. We speak to be heard, it means the world that the world is listening.

$319.59 of $500 per month
Bro... If I can clear RENT on support for MEMES alone? Holy fuck. I'd shit my whole ass. And then proceed to keep making memes. With my freshly shitted ass. No that's not a goal reward promise or anyth- HEY DON'T WRITE THAT, DON'T HIT ENTER ON TH
1 of 1