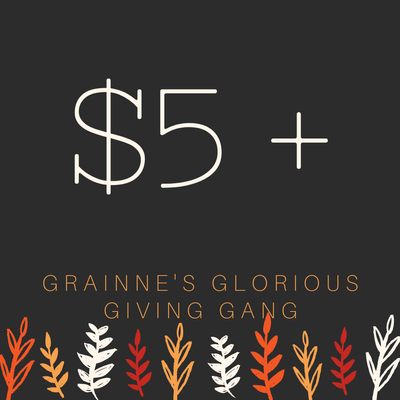 $5
per month
Join
All content on my Patreon is exclusive and only created for patrons.

Thank you for taking the time to come and check out my Patreon account!

My name is Gráinne, and I'm a singer songwriter from Ireland.

I released a record called Firing Pin in 2015, released an Irish traditional/folk Classical crossover record called Songs from Ireland with my friend (and award winning guitarist) Brendan Walsh in early 2019 and later in 2019 I released This Secret, an original music project, recorded in Nashville in October 2018.

Patreon is something I've been considering for some time, having met Julia Nunes in LA in 2017.  Julia makes music and music videos, and has a very successful Patreon - check it out! I was anxious about it though, and did nothing about it at the time.  I've talked to some people about a year ago and decided that maybe it was time to just give it a go!

I create exclusive content for my patrons - songs (covers and originals), insights and backgrounds, and the occasional download.   I only have one tier ($5 or more at your discretion) - and everything will be accessible at that level!

Thanks for taking the time to have a look at what I do! <3