Hourglass Nerds is creating content you must be 18+ to view. Are you 18 years of age or older? 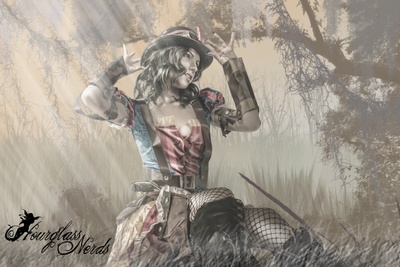 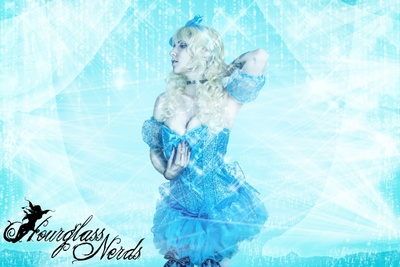 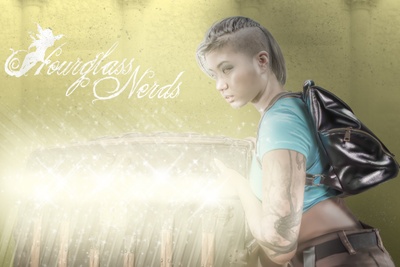 *Get instant access to all our "Not-Safe-For-Work" videos AND galleries.

Looking for REAL art, Real women, and REAL artistic nudes?
Looking for gamer girls, anime cosplays, and superhero babes?
Looking for a story created by Artifical Intelligence for every picture I make?


The short version is; I create beautiful photoshopped images of cosplay models that are then accompanied by a short story generated by a high tech AI generator! What does this all mean? Let me explain!

Each image is created from scratch. This means I buy and piecing together the cosplay costumes, find a local model, take all the pictures, and then edit them myself!

One day I started running out of ideas on what to put into each picture. They all started looking the same and I wanted to challenge my abilities. That's when one day I came across an AI generator called GPT-2. (See more info about it down below! Link to the program below!)

That's when I had the crazy idea of creating beautiful pictures based on the story that an Artifical Intelligence generates for me.

I type in a short one-line sentence and the AI predictive text will create a short 2-3 paragraph story based on what I typed into it! Once the story is made I will create an original piece of art based on what the Artifical Intelligence story came up with.

Bellow each picture I post, I'll add the AI story. This way you get a story with your picture! I will bolden the text like this so you can see what the starting sentence was, and where GPT-2's artificial intelligence begins! Some of the sentences are silly, dark, random, sexy, and quirky.  It's quite amazing! Please do check it out and play around with it!

What about the models??

I welcome all models no matter their age, size, ethnicity, tattoos, piercings, ECT. Though all our models look different they all have something in common, they are all nerds!

They are Star Wars fans, gamer girls, sword wielders, musicians, comic reading cuties, and cosplay enthusiasts. I'll give you a short bio of each of the models in the photoshoots so you can get to know the nerd behind your screen! It's photography with a personality and a story!


For now, this is more of a hobby. I'm hoping other people will enjoy my work and want to be an active participant in growing with me. I know there are a lot of creators here to choose from but I'm hoping I can create something truly amazing for your entertainment! 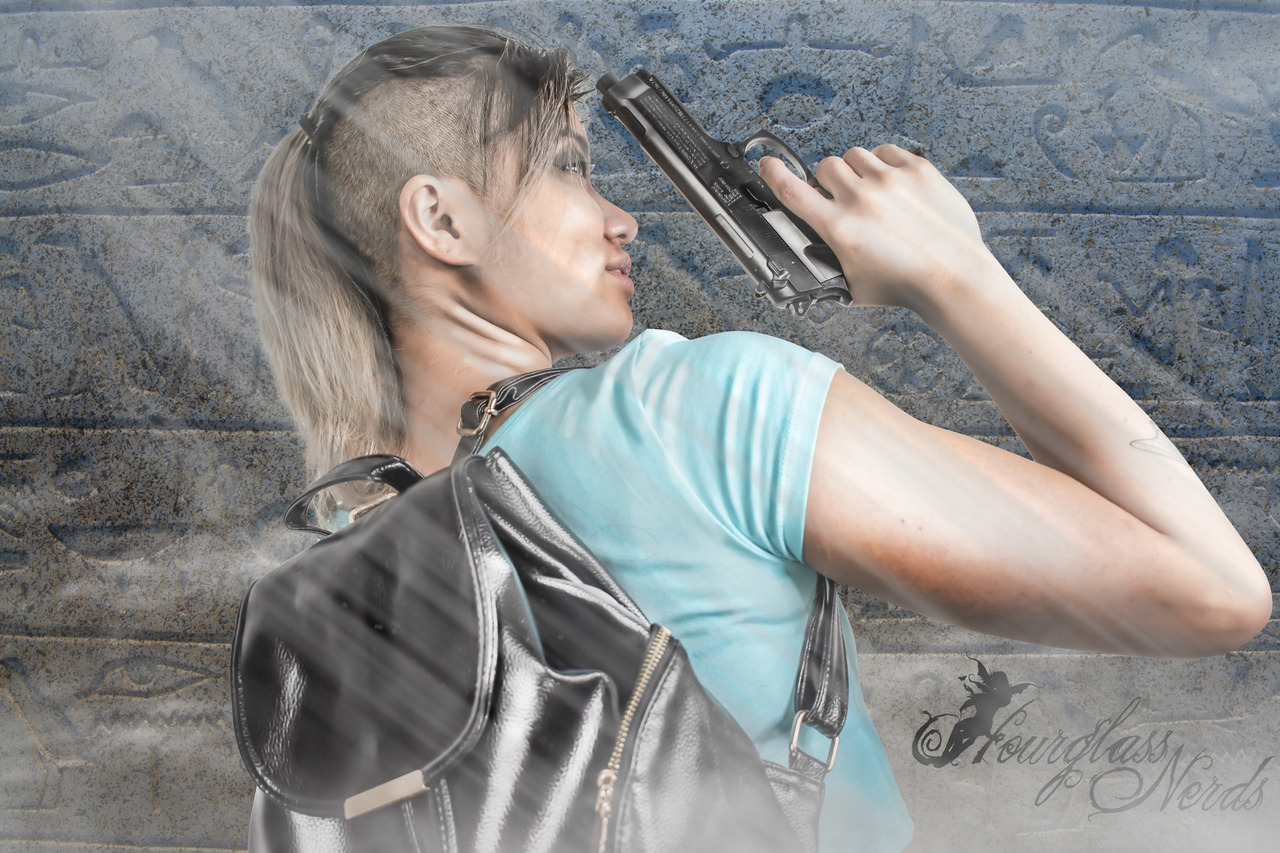 Very good question my inquisitive nerd. Patreon is a place where creators can raise money to create more content. This is a safe secure website that keeps everything tidy and guarantees your satisfaction! In return for your monthly donations, you will get exclusive prizes ONLY FOUND HERE. For $10, $15, or $25 a month you can get a wide variety of goodies! I'll explain what you'll get below!

Bronze ~ $1 a month ~
*Instant access to ALL $1 shoots
This means you'll get access INSTANTLY to ALL of the edited photos and stories that are NON-NSFW (not safe for work.... rated R)
*HD Downloads
Every $1 photo will come with an attachment in the post where you can download the image to use for ... well, whatever. Desktop background or facebook profile image. Just please leave the watermark so everyone knows where you got it =) and to support a local artist.
*Ability to Vote
You'll get to vote for what content you want to see. You'll get to vote on things like what cosplay you want to see, what body paintings you want to see, do you want dark or funny stories, and what other content would you want to see on here! I want you to get involved and feel like your choice matters!

Silver ~ $5 a month ~
* Instant access to all of my videos!
Yup, there are videos! I make videos of the models during the photoshoots, just simple clips of everyone having fun and poses being made. I also have editing videos! So you can watch me as I edit each of these pictures. You'll get to see the entire process of watching the photoshoot and watching the pictures get edited!
*Behind the Scenes
You'll get instant access to all the unedited behind the scenes pictures and videos. This might be before and after pictures, models doing model things, silly moments, and funny mistakes.
*Updates
You'll be the first to hear about any updates and things I'm working on! Sometimes you'll see pictures of the picture being edited as I'm editing it!
*Bronze rewards INCLUDED
This means everything that is in the bronze reward tier will also be included when you upgrade to silver!

Gold ~ $25 a month ~
*Get instant access to all our "Not-Safe-For-Work" videos AND galleries.
Are you interested in more lewd cosplay art? Don't be embarrassed, the female form is a beautiful form of art and my models love to show off their gorgeous figure. This tier gives you instant access to the nude art and AI stories. (WARNING: 18+ only. Also, I do not have much control over the AI stories so please don't get upset at any very lewd naughty stories it comes up with. It's all just art!)
*Bronze rewards INCLUDED
*Silver rewards INCLUDED 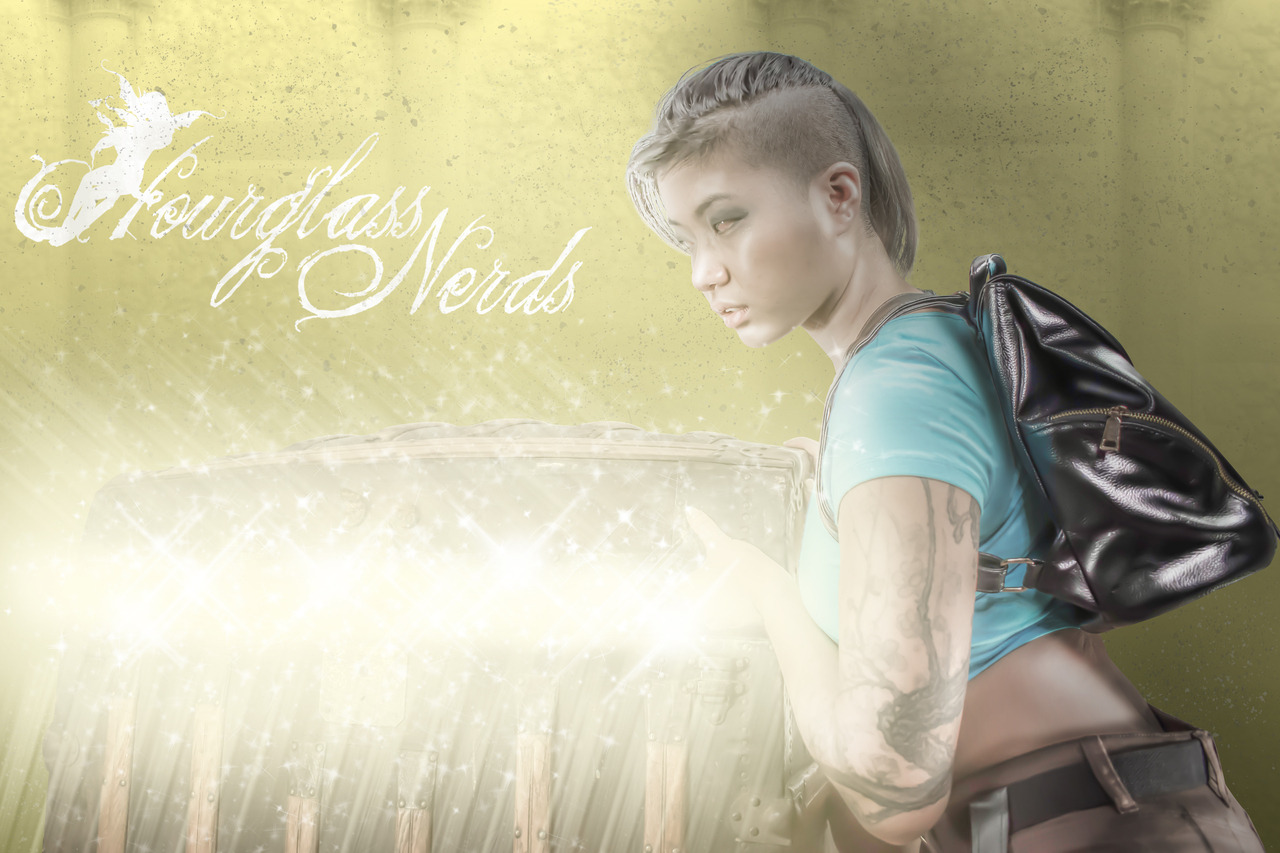 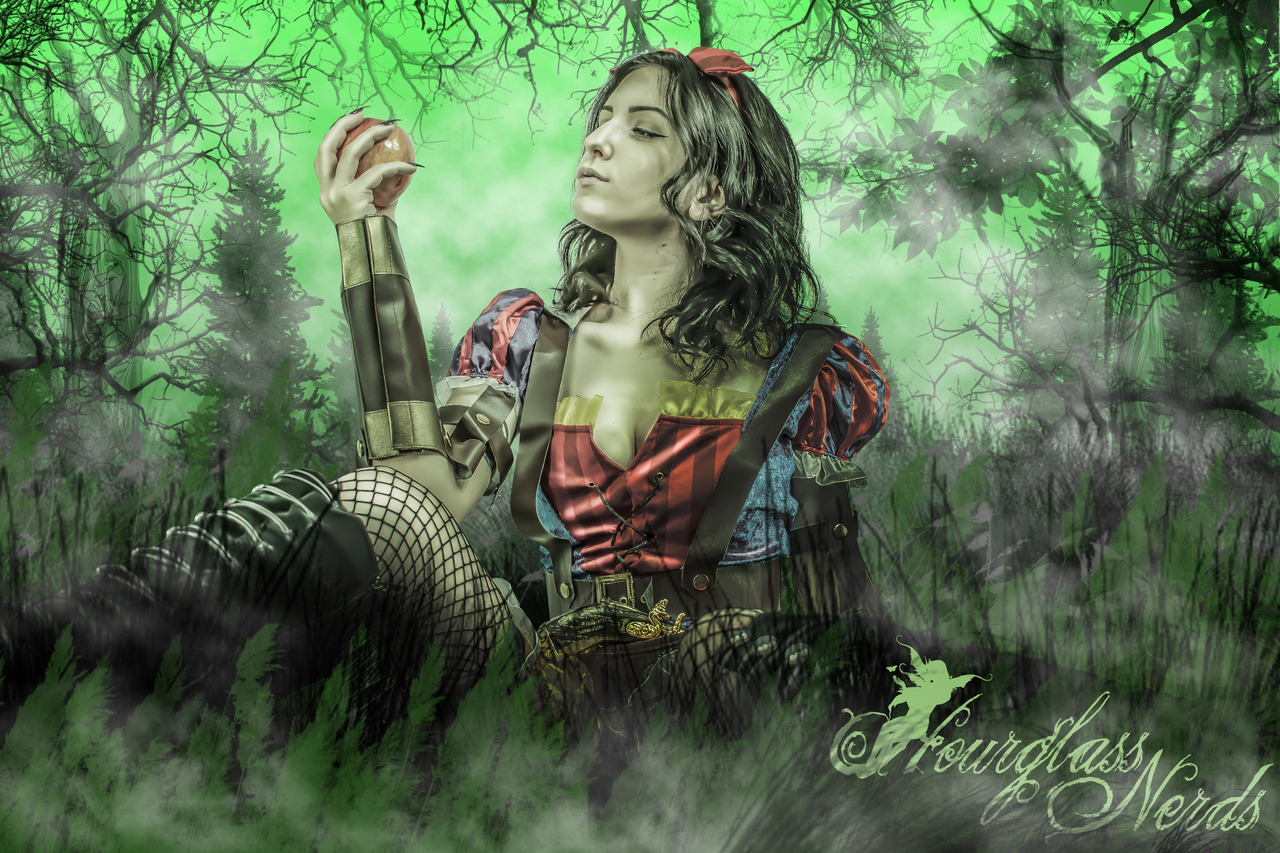 Hey there! Who's this weird person you keep hearing from? Well, my name is Archer Tesla. If there's a picture, post, or edit - I'm the one behind it all >:) I'm a 25-year-old female photographer and photo editor in the Seattle area. I also do cosplay in my free time! I'm not a model though, I much prefer to be on the other side of the lens! I can be more creative this way and meet a lot more cosplayers! When I'm not spending my spare time editing magical pictures, I run a drone start-up company in Seattle. Most of the edits I make are in my office trying to be careful that no one sees what I'm editing (NSFW edits lol ;P ) The Poison Ivy picture bellow is a picture of me and my Poison Ivy costume that I made for Emerald City Comicon. 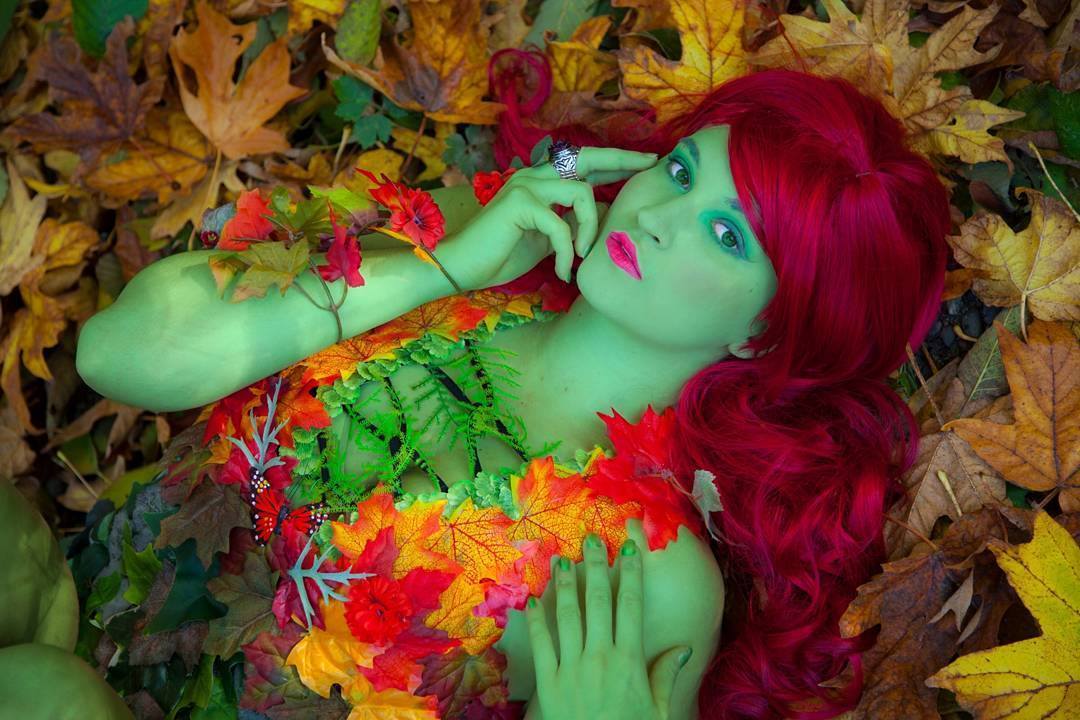 Even if you don't decide to donate, I'd like to thank you for stopping by! For your anonymous support, I'd like to give you a few stories and their respective images! Remember! Each picture is 100% edited and taken by me, and the stories are all artificial intelligence (except for the bold text in the story, those are the lines typed into the AI to generate the rest of the story!) 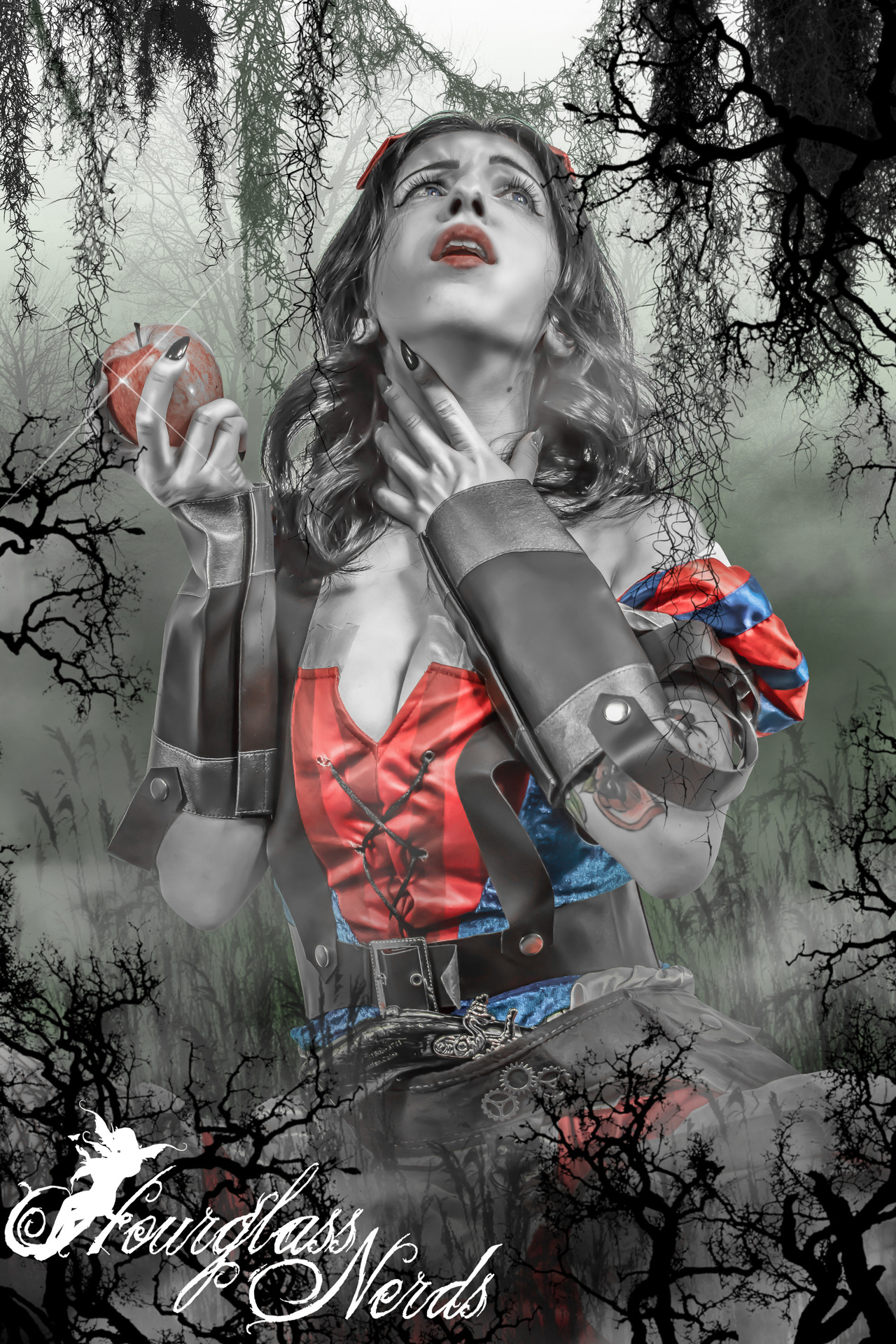 Snow White was in the middle of the forest when she decided to bite into the poisoned apple. She started to wonder what she was supposed to do now, as her body turned stiff and she started shaking.

She's heard of this situation, but she was never really sure what she should do. "Umm, I guess I should walk." She replied without thinking. However, in the moment of thought, she instantly fell from the tree and got into a fight with the dragon.

At that moment, there was a crash and a roar. The roar belonged to the dragon that attacked and killed Snow White. Fireballs lit the dark night sky with a column of orange flame. Although it was a stray attack, the dragon possessed an ironclad body. As a result, its own momentum carried it.

The burnt and charred bone of Snow White was stuck into the dragon's flesh. It was nothing special, but she was still much like a pet dog. ~ GPT-2 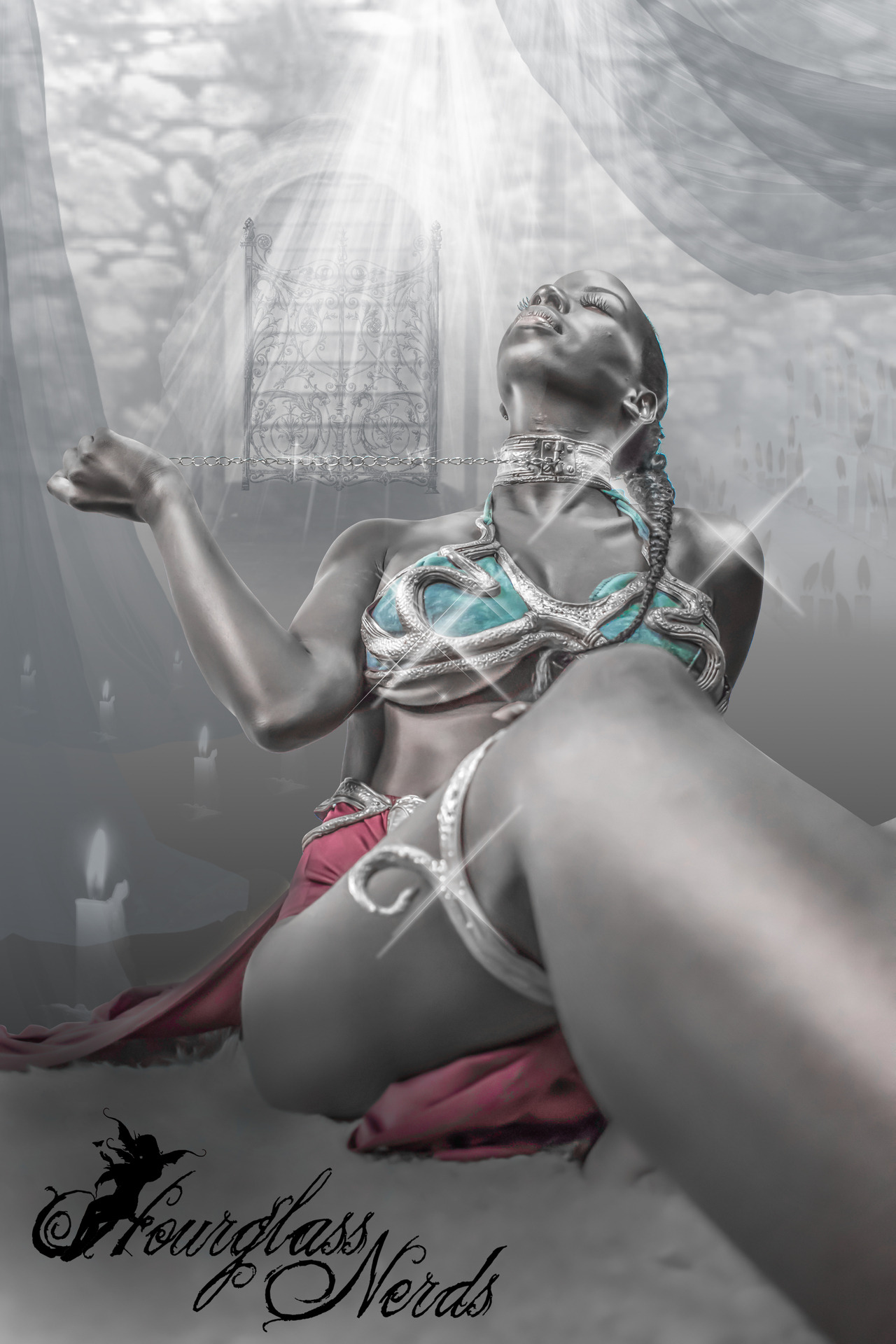 Princess Leia wasn't going to be a slave forever, she tugged on her collar and thought she had got it free, but all she could feel was ice. The cold seemed to change everything, but more so than the normal cold that a girl of her age would deal with, she sensed an unearthly chill.

No doubt, there was something a lot stranger up there, because the chill didn't stop, it just started getting colder and colder until it got to freezing. She realized that she could feel something, something cold and powerful.

It was the kind of feeling you get when your face hits snow and the snow hits your face, or when your eyes got frostbite and then they started falling on the ground.

Dizzy, she looked up at the crack in the ceiling where she had passed through the storm the night before and realized that she was standing in a great pit of void, with nothing in sight but endless blackness.

The Shadow reached out of the darkness and grasped her, pulling her downward. She knew the force pushing her down would not let her rise, but was powerless to stop it. She could only stare at the last thing in existence and hope to whatever gods might exist it would remember her as something living and near. Bbefore her eyes began to bleed and flow away, she grasped for the darkness. 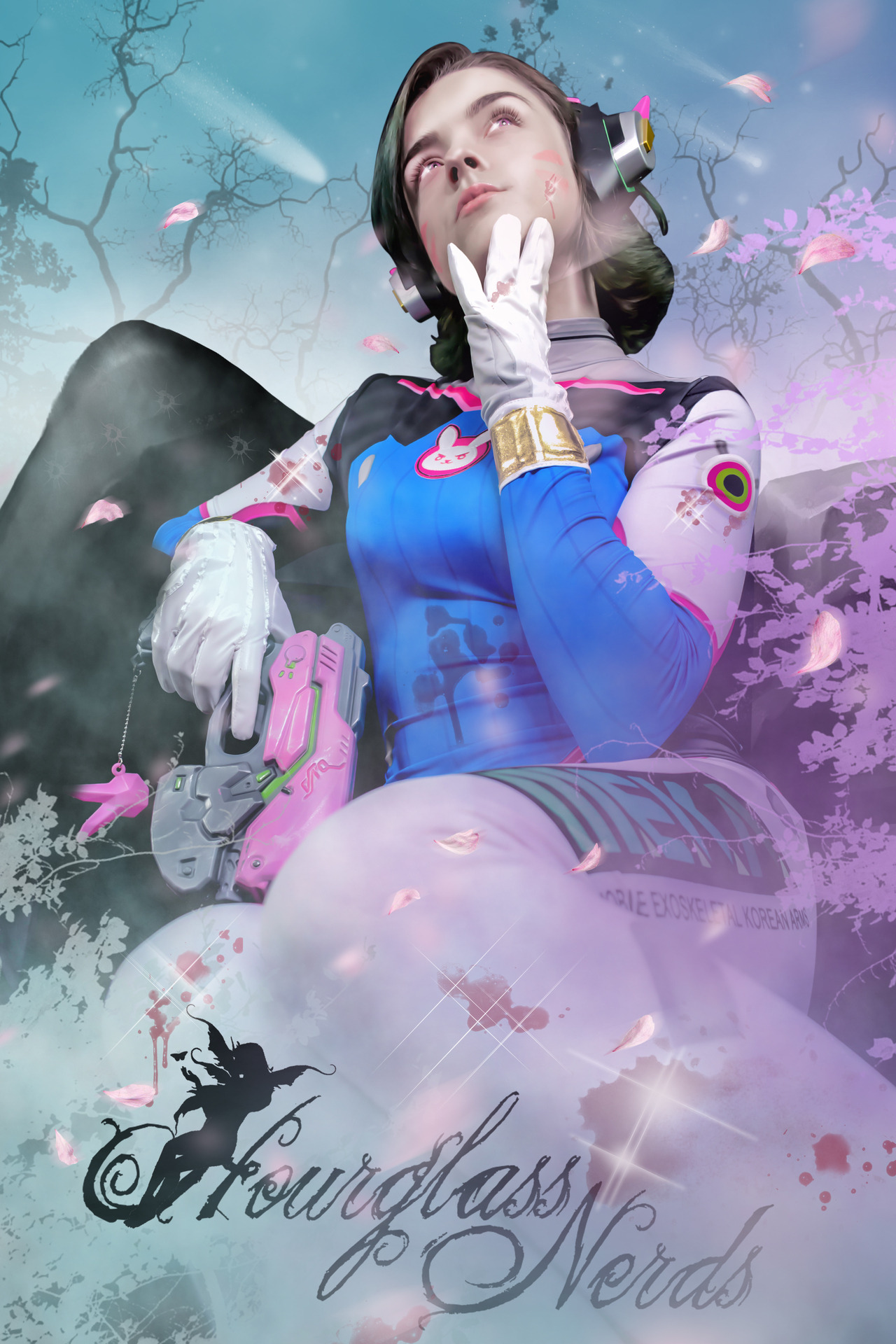 D. va just finished up the round with only her enemies' blood on her suite. She had a glow in her eyes that said she had just slain a flesh-eating monster and lost no time in doing so. As the crowd went wild, the champion of the day emerged. His hair was perfect. His wings were ready to fly. His clothes were new. Everything about him shone. He looked like he had just emerged from the largest human autograph contract he had ever signed.


Info on the artificial intelligence generator I use! Link is here:

"Built by Adam King (@AdamDanielKing) as an easier way to play with OpenAI's new machine learning model. In February, OpenAI unveiled a language model called GPT-2 that generates coherent paragraphs of text one word at a time.
This site runs the full-sized GPT-2 model, called 1558M. Before November 5, OpenAI had only released three smaller, less coherent versions of the model.
While GPT-2 was only trained to predict the next word in a text, it surprisingly learned basic competence in some tasks like translating between languages and answering questions. That's without ever being told that it would be evaluated on those tasks. To learn more, read OpenAI's blog post or follow me on Twitter."