My name is Katja Klengel an I'm a German comic artist and screenwriter based in Berlin.
When I was a teenager I wanted to become a manga artist. Of course I was inspired by Sailor Moon which is still kind of a religion for me. ;-) It's very possible that you will get Sailor Moon content in here. Maybe some sketches, maybe I'll show you my latest collectibles. ;-)
So when I decided I wanted to put myself out there and create stuff, I applied to the small publisher "Schwarzer Turm" and participated in manga anthologies for young talents. This was very important for me because in creating mangas and doujinshi I found a friendly community in which I felt safe. 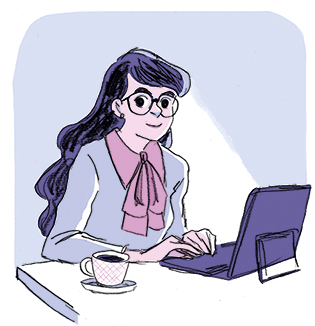 In my twenties I became more interested in the German comics scene and European comics. Inspired by James Kochalka, everybody was doing memoir comics now. So I also started doing memoir comics - four panels every day, under the title "Blattonisch". It was good practice but I quickly realized that four panels weren't enough for me, I needed more space. So my comics became longer and more anecdotal.

In 2012 I got the chance to make a longer story for a German newspaper. It was called "Als ich so alt war" (When I Was Your Age) and told the story of grandma Rosalie Kintzmann and her 21 year-old granddaughter Lilli, who both struggle with life. Rosalie cannot deal with her past and can't process the death of her husband and Lilli can't handle her present and has to figure out who she is. They keep each other's company and overcome their problems together. The comic was published by "Casterman" under the title "Quand j'avais ton âge"

So... but more importantly: What can you expect here?
You will get my latest memoir comics for Instagram in advance, a monthly (video) newsletter, some sketches, and behind-the-scenes stuff if you join my "Coffee" tier.
And if you want to have a first, exclusive look at my new, unpublished book "Girlsplaining 2", which I'm currently working on, then you can get that as well as the sketches, panels, drafts, newsletter, and behind-the-scenes material if you become a patron of my "Champagne" tier.

Follow my work on instagram/leafvangenova!
Bye and hope to see you soon!