KJimmy is creating content you must be 18+ to view. Are you 18 years of age or older?

is creating pinup art and erotica

More or less safe for work versions in high res. You also get to choose 1 "not safe for work" piece from the illustrations I create the month you pledge.

Big slap on the back.
$5
per month
Join
All the different versions of the drawings for the month you pledge in high res.
Work in progress and sketches posted.
Access to all the Bonus pieces I post here.
Access to polls.

I'm KJ aka Kinky Jimmy and I create lewd imagery... ;) I've been drawing sexy girls and futas for many years and I still love it. Only downside is that I don't often get to draw them exactly the way I want since alot of my work comes from commissions. This is where the wonders of Patreon comes into play, and by supporting me here I can finally get the chance to really play around with ideas of both my own and established characters from movies, games and cartoons. I will not be going for superrealistic, but rather a more stylistic and painterly approach to really put emphasis on sexy curves and cute faces. Now and then there will be polls that all Patrons can vote on.

What the different versions of the pinups will be is determined by the pose and action, but most of them will at least have both a sfw and nsfw female plus futa versions. At this point in time I'm gunning for about 2-3 drawings a month, but if I gain enough Patrons that will either increase or the drawings will be more elaborate and perhaps include more characters. 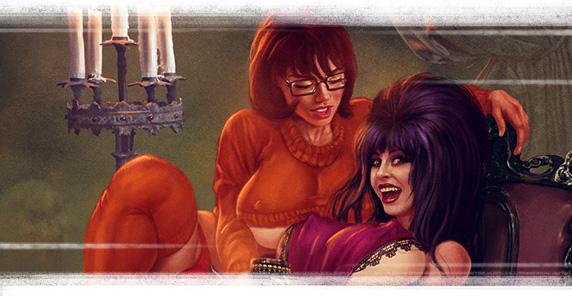 This is how it works: If you pledge for say April you get the rewards for that month, not the previous months. The rewards are sent out at the beginning of the next month after the pledges have been processed.  This might change later, but right now I feel it's working fine.

Previously relased rewards and other art packs can be found here: