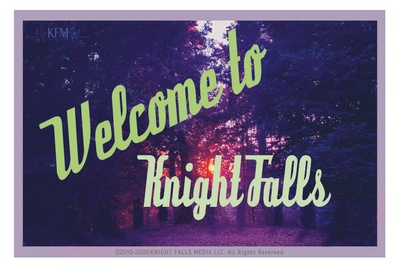 $3
per episode
Join
This basic level gets you four awesome perks! For starters, you'll get access to new episodes of Knight Falls, CA a whole WEEK before anyone else. In addition, a spot on our "Wall of Thanks" on our website lets everyone see just how amazing you are. We'll also be giving you a 20% discount on all purchases on our store! Finally, to show you just how much your support means we will be mailing you a personal thank you note on an exclusive Knight Falls, CA postcard! 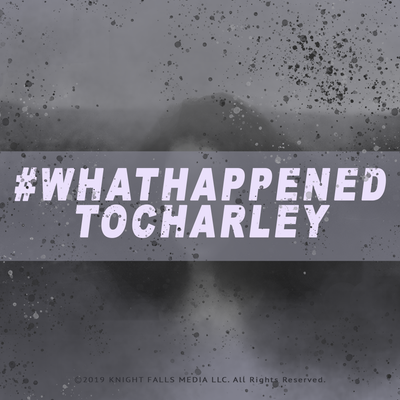 $5
per episode
Join
With this tier, you'll be getting everything from our $3 dollar tier, with the addition of an exclusive #WhatHappenedtoCharley button!

*Button will only ship after first pledge payment. 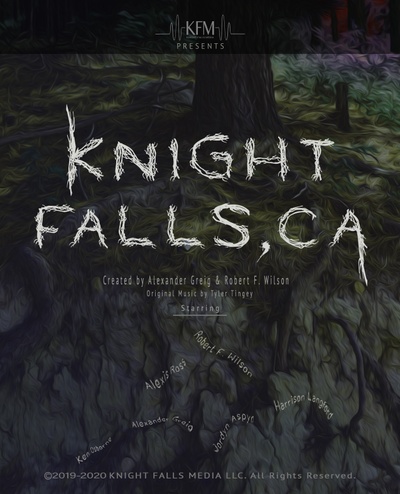 $10
per episode
Join
Get everything from the previous tiers plus an awesome Patreon exclusive art print!*

*Button and print will only ship after first pledge payment.

Hello, world!
Who are you guys?
We're Knight Falls Media and we're dedicated to creating exciting new stories delivered through a podcast format. We're currently producing on our first original series: Knight Falls, CA, an audio drama following freelance journalist Scott Sinclair as he investigates the case of Charley Cooper, who disappeared from the little town of Knight Falls, CA ten years ago.
What are you doing on Patreon?
Knight Falls Media was created because we love telling stories and we want to share them with the world. With Knight Falls, CA we've created an exciting world full of interesting characters and a storyline full twists, turns, thrills, and chills, and we want it to keep going. Making this show is a TON of work and involves a lot of people, all of whom we believe should be compensated for their time and efforts. By supporting us on Patreon, you're giving us a way to do just that. We have extremely high standards when it comes to our art, and with your help we can continue to meet those standards with the first season of Knight Falls, CA. And who knows? With any luck we'll be able to carry on, creating more seasons of the show and maybe introducing a new series or two along the way!
Alright, but what's in it for me?
We're glad you asked.
1. By becoming a patron, you'll get exclusive Knight Falls, CA merchandise! The more you pledge, the more cool stuff you'll get! All patrons also get 20% off the merch available on our website!
2. You'll get early access to new episodes of Knight Falls, CA one week before everyone else!
3. Exclusive behind-the-scenes content! As episodes are being made, we'll give you a behind-the-scenes look into our creative process, and it'll be for your eyes only!
4. You'll get a place on the "Wall of Thanks" on the Knight Falls Media website (and in our hearts)!

So how does this work?
As we said before, making this show is a lot of work, and we're a small company. Because of this we've decided the best thing for us to do is charge our patrons using the "Per Creation" model. This means you'll only pay when we release a new episode (don't worry, we'll let you know when that's coming up). This also means that we won't be sending out physical rewards until the first time you've been charged.

Thank you for making Knight Falls Media a reality. With your help we'll be able to keep it going.