$2
per month
Join
You get access to all patron-only content, including "On the Pandemic, To the Rising" -- a book of poems by MASS ACTION founder John Beacham 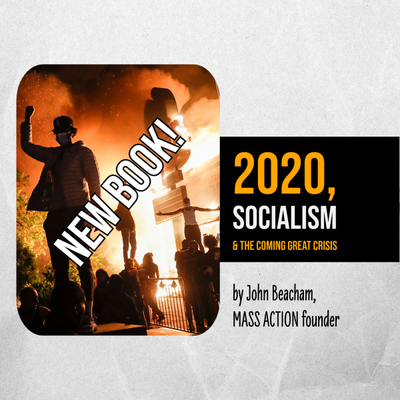 $6
per month
Join
Patrons of $6/month and over get a copy of book:

2020, Socialism and the Coming Great Crisis

As multiple worldwide crises of the capitalist era stampede toward a devastating collision, we must unite. We must be organized.

The stakes are high!

We must be committed and disciplined in the fight to save the planet, shutdown white supremacy, stop a world war 3, solve the immigrant and refugee crisis, institute planetary universal health care and so much more.

We must be bold and strategic at the same time. We must be as correct as
possible in every political decision we make.

Above all else, we must have political clarity. We must understand both the nature of our oppression and the varied political realities we encounter in the already upon us race for peace, justice and a sustainable planet.

Socialism—the revolutionary victory of the working class over capitalist rule—requires the emergence of studious practitioners who learn from lived experience, who help make sense of things like the street battles and uprisings of 2020, the genocidal government response to the pandemic, the
ridiculous 2020 elections and the growing popularity of socialism.

The collected works in 2020, Socialism and the Coming Great Crisis are meant to help workers and fighters for justice claim a greater foothold on the epochal times we are living through, grab the reigns of the planet in our hands with an unshakeable firmness and usher in the new socialist era of cooperation and peace.

1. The Great Crisis and the Final Conflict
2. A Vote for Biden is Not a Vote Against Fascism
3. Coronavirus Crisis: Seize the State & Economy
4. Uprising 2020: Rebellion, Repression and What to Do Now
5. Iran Crisis, WW III, Jailing the Arsonists, Our Tasks
6. Black and White Unity
7. Biden (s)Election: Hope Begins with Truth
8. Revolutionary Socialists for Bernie
9. Poem: The Trump is Dead

$10
per month
Join
You get access to all patron-only content, including "On the Pandemic, To the Rising" -- a book of poems by MASS ACTION founder John Beacham

MASS ACTION is a podcast and publications platform for socialist and working-class propaganda, news, views, conversations and more.

MASS ACTION is anti-imperialist and anti-racist.

MASS ACTION is joined with all mass movements for justice, joined to the revolutionary movement to defeat capitalism and replace it with Socialism.

The planet and its people are facing The Great Crisis. The people of the world must firmly grasp and focus on this key historical fact.

The era of class societies and the suffering and restiveness of the masses culminates in a final conflict over the future. The people will take on every challenge and the people will win.

Caused by Capitalism’s profit before everyone and everything else reality, The Great Crisis is made up of many inter-related crises: White supremacy, World War 3, the Climate Crisis, the Migrant Crisis, the coming Economic Crisis and more. Under capitalism, artificial intelligence and the digital revolution will continue destroying jobs and driving wages down.

The potential power of a united global working class is truly massive. Working class power is a power much greater than the problems we face.

The worldwide working class alone has the power to prevent and/or use The Great Crisis to fight for and achieve the socialist society we deserve and institute a new world of peace, justice, equality and cooperation.

Workers and oppressed people: We have the right to think, organize and act politically on a global scale in order to unite the people in a must happen battle to defeat capitalism, imperialism, racism and all forms of oppression. United, in mass organized ­­­­action, we are the actors in the creation of the socialist era of humanity.

­­MASS ACTION founder John Beacham is a veteran socialist. He is a teacher, organizer, propagandist and agitator.