$1
per month
Join
Willing donators, you are the foundation of any future ventures.

I am genuinely humbled by your contribution, so here’s what I want to give you in return:

Invested in the potential of these ventures, you seek specialist knowledge.

Highly loyal and dependable, you are the brute strength behind these ventures.

Okay, things are starting to hot up, and if anyone's gonna be crazy for action, it'll be you berserkers! Here's some more stuff to lose your head over:

Read on for more details of my projects, my Patreon-exclusive content, and myself...

I'm Mo, an indie author from Glasgow, Scotland. When I'm not taking care of my four kids, my hobbies mainly revolve around reading, watching movies, and football. While my professional background includes international travel writing and freelance editing, I’m probably best known to the online community for my unofficial novelisation of Final Fantasy VII, my Final Fantasy novels and YouTube series produced in association with KupoCon, my analytical book Norse Myths That Inspired Final Fantasy VII, or my forthcoming Axtelera Ray: Rise of Astrone series which fuses global mythology with superhero-fantasy.
Like many indie writers, I’m pretty limited with the time I can spend on personal projects. Let’s face it, being a responsible adult is tough; I’m not exactly rolling in money, so I have to prioritise paid work, and it can take an eternity for me to release new content. I’m on Patreon to ask for a bit of financial backing so that I can forego freelance jobs and focus on bringing my readers what they really want in a better, much faster way.

As well as a variety of endeavours including video content creation, blogging, and behind-the-scenes podcasts, I'm currently in the middle of two novel projects (The Chronicles of Astrone and The Cetran Legacy) and a new analytical work, Greek Myths That Inspired Final Fantasy VII.

This is the first book in my superhero-fantasy series, Axtelera Ray™: Rise of Astrone, co-created with  Alroy Jovi. The Chronicles of Astrone is largely told through the eyes of two teenagers who come into the possession of strange crystals, and soon find themselves in a parallel otherworld where supernatural abilities are commonplace. The pair discover that what we would call mythology is really just the history of this advanced civilisation, and famous gods such as Thor or Zeus or Osiris were actually heroes from its past. The story itself is an adventure fraught with danger and twists, and whose protagonists are destined to uncover complex conspiracies and bring peace back to the realms, acquiring extraordinary powers along the way. The Chronicles of Astrone draws heavily from Norse, Saxon, Egyptian, Slavic, Celtic, Greek, Roman, Chinese and Native American legend to fashion a unique tale. It is my ambition to publish the book in full upon its completion but, until then, I’ll be releasing it as a ongoing web serial, broken down by chapter segments. Patrons will have exclusive early access to the serial entries, but each will later be posted on free sites such as Wattpad.
At this time, there is a 90-page preview edition of the novel available to everyone as a free eBook. Patrons pledging $10 or more per month will also have access to the entire first half of the novel in eBook format. If you’re interested to learn a bit more about the project, why not visit the Axtelera Ray™ website, or check out our featurette?

PLEASE NOTE THAT THIS IS A WORK OF FAN FICTION, AND STRICTLY NON-PROFIT.  THESE BOOKS WILL BE FREE AND AVAILABLE TO EVERYONE, WHETHER YOU ARE A PATRON OR NOT.


The Cetran Legacy is the third volume in my unofficial retelling of bestselling videogame, Final Fantasy VII. Like its predecessors, A New Threat and The Man in the Black Cloak, the novel will be available to read online or download absolutely free. The Cetran Legacy will cover the story between Cosmo Canyon and the iconic events at the Forgotten Capital, following Cloud and the others' journey to places such as Rocket Town, Wutai and the Temple of the Ancients. What makes my project a bit different is my inclusion of details from every corner of the FFVII Compilation, offering additional insight into the characters and plot that wasn't available in the original game. It is my intention to publish each chapter on my FanFiction.net account, but will share preview works-in-progress with everyone on here to gauge feedback before the final draft is released. Once the novel has been completed in its entirety, it will be made available to download as a free eBook.

At this time, there is a 125-page teaser edition of The Cetran Legacy available here. In addition, both A New Threat and The Man in the Black Cloak can be downloaded in a variety of digital formats, or you can arrange your own paperback copies. I have also produced a standalone Final Fantasy VII novella titled The Nibelheim Incident, retelling the iconic tragedy in its entirety from the perspective of characters such as Cloud, Tifa, Zack, Hojo and the Turks. Presented by KupoCon, the book is a fan collaboration between myself and renowned community artists Crimson Sun and AJ Hateley, and is free to download here. It's also now being released as an audio series by KupoCon, read by Final Fantasy XV's Liam Mulvey. 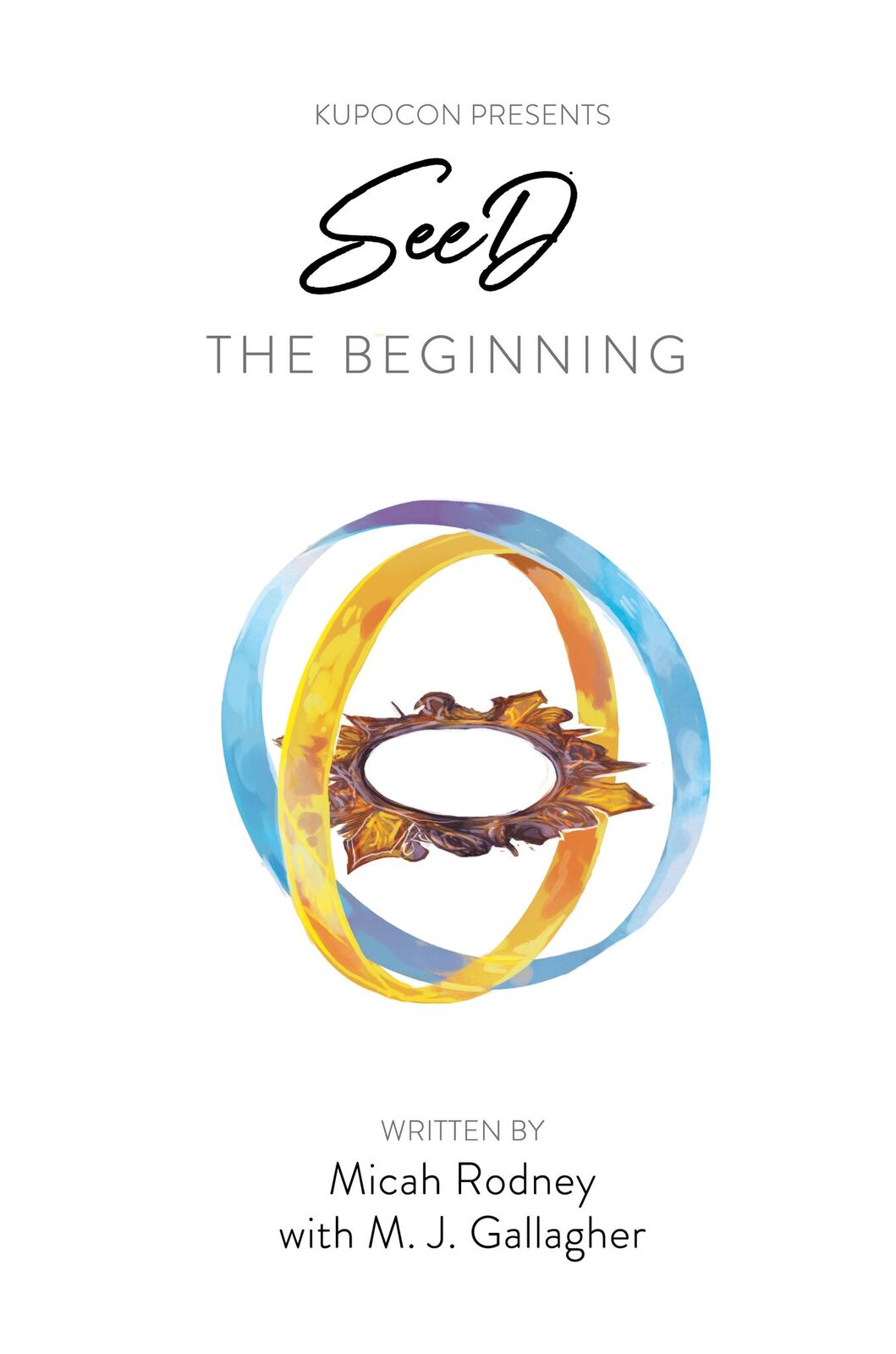 In addition to my FFVII works, I have recently co-authored a Final Fantasy VIII novel with American writer, Micah Rodney, which is titled SeeD: The Beginning. Another project in association with KupoCon, it covers events from the game's opening to the aftermath of the SeeD exam at Dollet. The book launched in September 2019 and is available to download for free here, with access to additional content here. I also have a weekly blog which explores the plethora of Norse mythology in the Final Fantasy series, providing a multitude of details that may be unknown to the casual player.

No matter the amount, making a monthly pledge to support an artist is a huge deal. It means a lot to me that fans enjoy my work, and I love to share as much of it as I can, as often as I can. But, it's only fair that I offer additional rewards and bonuses to contributors, so I've set up a tiered rewards scheme to show my gratitude. There are dozens available, but here are a few of my exclusive favourites:


Check out the rewards list to view them all.
(Please note that as per Patreon's terms, all new pledges will be withdrawn immediately and subsequent contributions on the 1st of each month. Limited edition or shipped items will become available shortly after that.)

Unable to pledge? That's no problem; I really appreciate you reading my work, and still have a load of stuff available to non-patrons. You'll find links to all the good stuff here.

Like most people, I’m not particularly keen on asking for donations, but writing and producing your own material can involve a lot more than some may realise. My day job covers my household bills and living expenses, but I have to take on freelance tasks to help pay for all the unexpected costs that regularly occur with families. On top of that, as well as the hundreds of hours I’ve invested in my work, any time there are project-specific things such as marketing, commissioned art, or editing required, it all comes out of my own pocket. And this begins to build up.

Regardless of what happens, I will continue to write, but it can be a slow process. My intention is to use your donations to offset some of the money earned through freelancing. Basically, the more costs covered by your patronage, the less freelance income I need to break even, thus allowing me more time to work on my personal projects and release them faster.

To give you an idea of some of the costs and outgoings involved in such endeavours, here are a few examples:


As much as I love being an indie author, it does have its drawbacks. I hope that with the aid of your kind contributions, we can keep these to a minimum.

Want to help but unable to monthly pledges? One-off donations can be made via PayPal to [email protected]

Many friends and associates have lent me their talents in setting this page up, and I wish to use this space to thank them and acknowledge their help, as well as add all the usual legal stuff.

Maurice J. Gallagher asserts the moral right to be identified as the author of Axtelera Ray™: The Chronicles of Astrone

All rights reserved. No part of this publication may be reproduced, stored in a retrieval system, or transmitted, in any form or by any means (electronic, mechanical, photocopying, recording or otherwise) without the prior permission of the creators.

This preview novel is a work of fiction. All the names, characters, businesses, locales and events portrayed, other than those clearly in the public domain, are either the products of the creators’ imagination or used in a fictitious manner. Any resemblance to actual persons, living or dead, or actual events is entirely coincidental.

This is a work of fan fiction, and is strictly non-profit. All material from the main unofficial novelisation project and its derivatives are free and in the public domain. Neither the author nor the project is in any way endorsed by or affiliated with Square-Enix Holdings Co., Ltd.

This is a work of fan fiction, and is strictly non-profit. All material is free and in the public domain. Neither the author nor the project is in any way endorsed by or affiliated with Square-Enix Holdings Co., Ltd.

KupoCon is a Final Fantasy fan event. It is not endorsed, sanctioned or in any other way supported directly or indirectly by Square-Enix, and its respected partners. Final Fantasy, characters, names and related indicia are trademarks and copyright of Square-Enix Holdings Co., Ltd.

This is a work of fan fiction, and is strictly non-profit. All material is free and in the public domain. Neither the authors nor the project is in any way endorsed by or affiliated with Square-Enix Holdings Co., Ltd.

All material without exception derived from Final Fantasy® VIII (1999) and all official publications is property of Square-Enix Holdings Co., Ltd.

KupoCon is a Final Fantasy fan event. It is not endorsed, sanctioned or in any other way supported directly or indirectly by Square-Enix, and its respected partners. Final Fantasy, characters, names and related indicia are trademarks and copyright of Square-Enix Holdings Co., Ltd.