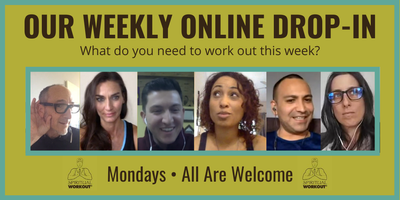 Admission to ONE Spiritual Workout Weekly Online Drop-In each month (on the last Monday, a $25 value).

The Spiritual Workout Online Drop-In is:

PLUS all Spiritual Workout Video Tidbits as they are created. 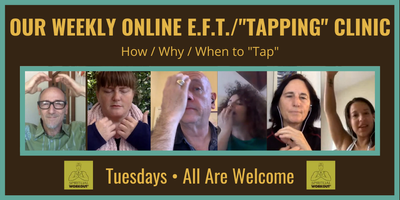 That means 14 hours of live instruction/guidance every month.

Plus all Spiritual Workout Video Tidbits as they are created.

Plus first-glance at articles/blog posts as they come.

Plus deciding on topics for online workshops.

Plus discounts on any and all online workshops.

This is perfect if you are looking to augment or replace your therapy; if you are "working on" a particular issue (especially a chronic one); if you are eager to create something new in your life; if you are needing to move through a crisis or acute problem that has recently emerged.

$500
per month
Join
First of all, there will only ever be 50 Champions at any given time. Like Enthusiasts, you will gain admission to all three live, weekly, online Spiritual Workout classes every week (a $220 value).

Mostly, as a member at the Champion level, you are a champion of this work.  You want to support it being out in the world in a powerful way.  You want to engage it in its written form.  You want to commiserate with its creator.

My first book, "An Extra Year," was written and published ten years ago.  It's a memoir of my experience after the death of my partner and, I think, serves as one man's "Spiritual Workout for grief and loss."  It's available as a paperback and you can find a link to it in the Featured Tags/Books here on the page.

"The Spiritual Workout Handbook" was written and published in 2010.  It's a an excellent primer for newcomers and a valuable resource for veterans.  It's currently available digitally and you can find a link to it in the same Featured Tags/Books as "An Extra Year."

I thought it was time to "launch Spiritual Workout into the world" about eight years ago but Life had other plans.  Anyone?  That meant instead of starting my endeavor from the lofty perch of a cushy entrepreneurial financial runway and all the time in the world, I started it instead from the bottom of a deep, dark ditch of financial ruin, homelessness, penny-less-ness, and lots of other "less-nesses," with wave after wave of emotional upheaval, and with a tremendous sense of urgency.  It also meant an abrupt end to the rhythm and flow of writing regularly.

I doubled-down on my heart's desire, though, because "get a job" just wasn't going to cut it.  I survived the darkest of the dark nights of the soul.  I survived years of not living anywhere, of not having enough dollars, of not having health insurance, or or or.  Ultimately, I emerged from most of that not only with Spiritual Workout® fully intact but with another enterprise, The Consciousness Company, which came along with it and which is finishing its first year.

Of course, none of this was by accident.

As I have said elsewhere on this page, I'm not at all special or different from anyone who lands in an experience not to their liking and wants to leave it behind in favor of something far better. I just happen to possess an obsession with/mastery of a practice that is a path -- a path -- to doing so.  As a result, boy oh boy do I have some stories to tell.  They range from harrowing to humiliating to hilarious and include pretty much everything in between.

With the support of a full complement of Champions, I'll tell these stories in essays (two or three in the pipeline), in a second volume of The Spiritual Workout Handbook (also in the pipeline), and in new books (two outlines currently in the pipeline).  And who knows?  A bit of poetry may make its way into the mix as well, but I digress.

My intention is to share any and all of this work with you first, as regularly as possible.  Of course, I want to solicit your feedback to it along the way; to invite you to help me shape it by telling me what's interesting, what isn't, what's extraneous, what's missing -- that kind of juicy give-and-take.  It will be a unique way for you to engage this brand of personal, spiritual, human growth and development and it will be an honor to commiserate with you about it along the way.

I am incredibly humbled by and grateful for your support as a Champion.  It will afford me the opportunity to focus serious time and energy every week on producing this content for you -- and for all of us.

CLICK HERE to see what it is we're talking about (it will cost you an email address).  Scroll down and sample each of the offerings in your subscription:  the Drop-In, the Tapping Clinic, and the Intention-Setting Clinic.  If you align with these 15 universally spiritual concepts, you will likely appreciate what we do here very much:

Bottom-line, people who hang out in Spiritual Workout world for a little while tend to be blown away by the experience of what their issues and challenges actually look like through the lens of these concepts.  Those who work out, as it were, typically begin to see changes in their lives fairly immediately.   Here are a few of them in their own words.

We strive to make it as easy for you to get an idea of Spiritual Workout before subscribing to our weekly Drop-In and Clinics and Free Sessions is one of those ways.

The dollar cost to you of this 18-minute session is exactly zero.  The session will, however, be video recorded before living on our YouTube channel, promoting the wonders and goodness of Spiritual Workout.

If you want to kick the Spiritual Workout tires, come on down!  CLICK HERE to schedule your free 18-minute session.  (Access to strong WiFi and functional camera are absolutely required.)

Hellooooo!  My name is Steven Morrison.  I'm a former psychotherapist, creator of Spiritual Workout, author of the memoir, "An Extra Year: Grief and Loss in the New Age," "The Spiritual Workout Handbook," and miscellaneous pieces published elsewhere on the interwebs.  I'm really glad you're here and I know it's not an accident.

My trusted partner in this Spiritual Workout Online endeavor is Delilah De La Rosa whom you shall soon meet. It is because of her belief in and commitment to this work that you are reading these words right now. You will see what an integral role she plays in our Drop-Ins and Clinics.

I very much look forward to meeting you and, most importantly, helping you to work out some stuff, Spiritual Workout style.

18 of 100 patrons
The overarching, primary, paramount intention of being on Patreon is this: to cultivate and connect with a dynamic, global community of conscious people who share a common language and a life-affirming approach to living as humans.  That's why we are creating people goals instead of dollar goals.

So, people...let's do this!  Become one of the First 100 subscribers -- at any level -- and when we hit this milestone, we'll know that we are truly off and running.

At that point, we will present our first Spiritual Workout Online Workshop (a 3-hour intensive on a particular subject).  You will decide what the subject will be and you will attend for FREE.  (A $195 value.)