is creating support for the past, present & future of traditional animation.

Support us and keep up to speed!

$3
per month
Join
At the $3 a month level, for a minimum of 1 year, you will have exclusive access to the Patreon supporters blog on the ANIMAKERS network, as well as enjoy the discount opportunities as a network member. 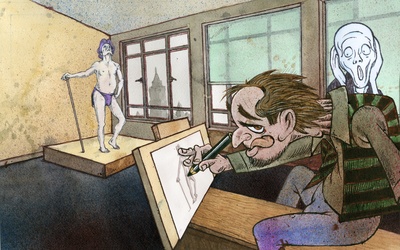 $5
per month
Join
When at art school I spend a year of independent study in illustration, under the tutelage of the great Ralph Steadman. I consequently want to create a unique animated sequence in the Steadman style for "The Old Man mad About Animating" film, telling this story. This sequence will be entirely dedicated to the transformative experience it was for me - sharing with the audience the incredible lessons I learned from the great man. I estimate it will cost me approximately $3,600 to do everything - specifically to pay for the assistance, services and equipment I'll need to complete the necessary animation. So, if 60 people could donate just $5 per month for 1 year, I in turn will complete the sequence in that time and publish a bonus, 60 art print "limited edition" of the concept art for this sequence, sign them and gift them to all my "bonus" patrons. I believe everyone will love this sequence in my film and learn so much from it, as I did. I thank you for your support!  :)

$5
per month
Join
At the $5 per month level, for a minimum of 1 year, you’ll receive all of the above, plus FREE access to Tony White’s respected “Drawing for Animation” online course.

About The 2D-ANIMATED MUSE

Please support my legacy project, in support of the past, present and future of traditional hand-drawn animation!

Initially beginning life as the “Museum of 2D Animation” we have decided to expand our Patreon mission ~ to support not only the PAST of traditional hand-drawn animation, but also the PRESENT and the FUTURE too! Now renamed, “The 2D ANIMATED MUSE”, nothing about our past initiatives have changed. We are still committed to continuing with an online museum of 2D animation. However, with the recent expansion of our other activities, we feel that we have so much more to offer the present and future of traditional 2D. Let us explain… 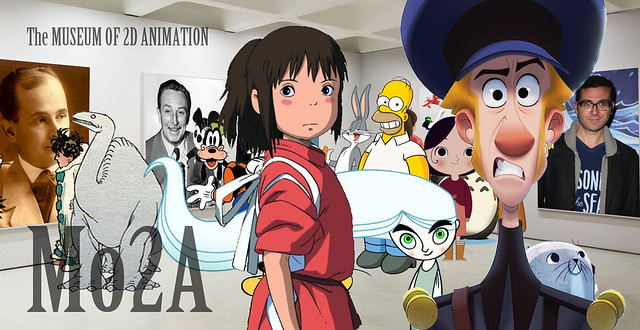 The Museum of 2D Animation will soon be moved to the ANIMAKERS site, with your help.
Earlier this year veteran, award-winning animator, Tony White, and founder of the 2D ACADEMY, established the ANIMAKERS network, where professionals, students and fans of animation can gather together within a dedicated social network that also provides courses, live online classes and a special annual festival event.

Tony has spent the last 16 years sharing his animation knowledge with students of all ages.
As indicated above, we now fully intend to integrate the online museum into the ANIMAKERS site, as well as develop a production base for Tony’s new and personal “The Old Man Mad About Animating” feature-length film. The film seeks to share some of the inspirational learning experiences Tony has received from such legendary figures as Ralph Steadman, Richard Williams, Ken Harris, Art Babbit and many, many more within and without the industry. At the same time the film production will provide support for animation students via an apprenticeship scheme via the 2D ACADEMY. If fully funded, the film will also offer respected professional animators from around the world cameo short film animation opportunities within the film, interpreting Tony’s many stories using their own unique hand-drawn styles and techniques.

Obviously to do all of this we need time, money and support. For this very reason we‘ve expanded the reach of this Patreon page - especially to embrace these new commitments towards the past, present and future of traditional animation. We therefore hope that our current Patreon supporters will remain with us, and that new supporters will join us to enable our work further.

Anyone visiting the ANIMAKERS network site can learn more about us from there. Indeed our Patreon supporters have already been offered free annual membership for being part of our journey so far. In doing so, they – and all new Patreon supporters - will also have access to our private blog site within the network, where they can see current and future work on the “T.O.M.M.A.A” film - in addition to significant discounts on many other items that regular ANIMAKERS members already enjoy. Perhaps now it will help existing and future Patreon backers to understand the film side of things a little more…

"The Old Man Mad About Animating”:

Always spanning the pencil-driven worlds between digital and traditional.
The Hollywood industry has effectively dismissed drawn animation since the Disney Corporation closed down their legendary 2D animation studio in 2002. This event effectively caused an entire industry to die overnight in the USA! It also meant that not only did many truly remarkable artists and animators find themselves on the scrapheap of a great tradition, but also that everyone lost a valuable link in the chain – specifically where young and aspiring 2D artists had nowhere to go to learn, experience and practice the necessary crafts and skills that traditional hand-drawn animation demands. But what has all this to do with the Tony White’s film?

"The Old Man Mad About Animating” is a love story.

It is a story about one artist’s lifelong love for the tradition of hand-drawn animation, one that continues to sustain and inspire him after over 5 decades of work. Tony White is a British Academy Award-winning animator, author and teacher who - as indicated above - currently, teaches and runs his own emerging animation network, ANIMAKERS, in Seattle. He also hosts live and self-taught online courses for students of animation, under the banner of the 2D ACADEMY. Through all these various efforts Tony seeks to keep the wonderful artform of traditional hand-drawn animation alive!

Yet Tony’s love for animation is not the only love story being told here. There's the love and belief he desperately needed to find for himself and his work from the very beginning. Although born to poor and yet wonderfully supportive parents, Tony’s childhood was haunted by sickness, fears, anxieties and a total lack of self-confidence or belief in himself. Despite years of failed conventional treatments Tony was ultimately cured of all these things in a most unlikely and yet quite amazing, way. Tony saw the whole thing as being somewhat miraculous at the time. It was also necessary - as without it happening, Tony’s career would never have begun in the first place! It is in the sharing of this part of Tony’s long life journey too that others may also find ways of transforming their own lives.

So without doubt, this film is most definitely a love story, on many levels. Through it the now 73 year-old Tony - aided by his rambunctious animated muse Arnie - imaginatively remembers and animates his journey through life - on both inner and outer levels. Yet by additionally embracing and celebrating the traditional animation world of today, Tony hopes to invite a number of the contemporary 2D animators he most admires, to recreate many of his stories for him - each in their own style. With the whole thing being uniquely set to music, “T.O.M.M.A.A” should give its audiences as sense of a contemporary Fantasia. However the bottom line really is - this film is not so much a Tony White “ego trip”. It is instead far more concerned about paying homage to a wonderful artform and positively fighting to stop it from dying forever in these extremely challenging times.

Please do help us in achieving our mission - before it is too late!

Recent posts by The 2D-ANIMATED MUSE