$2
per month
Join
or save 5% if you pay annually
Everyone who joins my Patreon gets access to EVERY POST! We believe in Dignity For All.

So we begin at $2/month so everyone can participate. Two dollars per month is about the same as paying for one of my shows per year - but here you get to see dozens and dozens of them.

Most importantly, by joining my Patreon, YOU become my producer. You are helping me create my work one month at a time and I really, really appreciate it.

Longing Lasts Longer is a recent multiple award-winning show of mine. To date, it’s been performed 196 times in 44 cities around the world and is still going strong. LLL has been called, a blend of razor-sharp satire, memoir and comedy, whose street smarts and exuberance, opens a crack in our planet’s post-gentrified landscape.

Here on Patreon, you can watch our multi-camera shoot of a beautiful production of LLL from St. Ann’s Warehouse.

$5
per month
Join
or save 5% if you pay annually
At this level you'll have access to every post PLUS a digital copy of my book, BAD REPUTATION.

Thank you for stepping it up a notch. Steve Zehentner, my collaborative partner of 30 years and I need your support to continue to do what we do – provide challenging old-fashioned one-of-a-kind content at a discount price. We really appreciate you and need your involvement in our work to continue doing everything we do!

Our book Bad Reputation was published by Semiotext(e). It contains three of my scripts with penetrating essays by Stephen Bottoms, Ken Bernard, Chris Kraus, Sarah Schulman and Steve Zehentner. Plus it’s loaded with exotic photographs!

Bad Reputation is also my all-girl-revenge show that examines the co-optation of the “bad girl” image by the art and entertainment world. Long before the #Metoo movement, as a girl who was slandered and shunned, I created work about that experience that changes the narrative from victim to target. Bad Reputation will be uploaded to Patreon in 2022!

$10
per month
Join
or save 5% if you pay annually
At this level you'll receive all the benefits from the previous tiers AND a Penny Arcade COFFEE MUG!

Thanks for mucking in and sharing a cuppa of whatever with me! A great way to start your day.

This super extra-double high-quality coffee-tea-chai latte mug features an iconic photo by photographer Jasmine Hirst, who I have collaborated with since 1995.

New York Values is my show that is an autopsy on the ongoing death of bohemia.

The beautiful 2002 production of New York Values from PS122 in New York is available for viewing on my Patreon as well as a recent solo one-off version from 2020 at Joe’s Pub.

Welcome to my Penny Arcade Patreon! 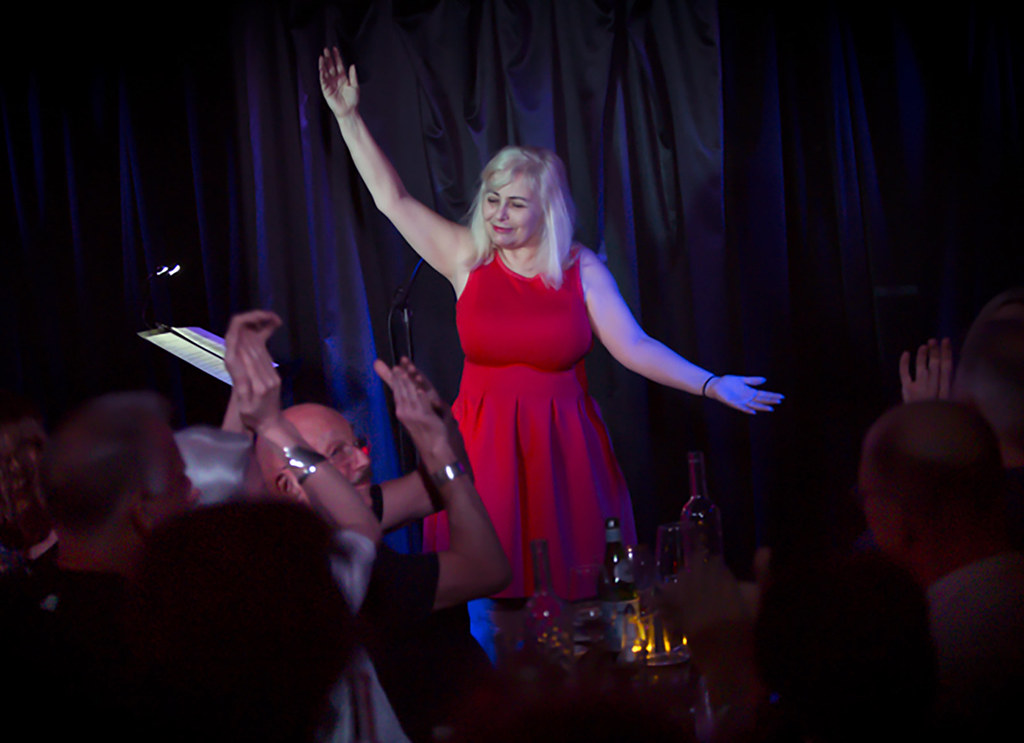 If you appreciate my free-thinking on social media or have ever attended one of my live shows and left feeling inspired, I think you’ll enjoy my Patreon.

I'm bringing everything I have done in my 71 years of life experience and 52 years of performing - 35 of those years as an international touring artist - to this page. I have a massive theater archive of over 1000 shows from 65 cities around the world.

From my first solo performance with a rock band in 1985, my twelve ensemble plays, my international hit shows, Longing Lasts Longer and Bitch! Dyke! Faghag! Whore, to one-off performances and works-in-progress, I think you’ll find a lot here to entertain and support you in your own journey.

Live events, readings from my developing memoir and biographies of some of the world’s most important culture makers from my Lower East Side Biography Project - all here exclusively for you!

Most importantly….by joining my Patreon, YOU become my producer and your patronage helps me to be able to develop all my new projects.

Give it a try, become a part of my Patreon community.

You'll have a personal connection with me and you can message me directly - I write back!


NEW PROJECTS with Steve Zehentner, my collaborator of thirty years! Steve and I are developing several new shows that need your support.

Bowered in Silence, a poem/song cycle with text written during the pandemic and developed recently during a residency at New York Theater Workshop

Who Can Say What To Whom, performed this year as a work-in-progress at the Tennessee Williams Festival in Provincetown. I’m out there on a limb to investigate a critical issue of our time.

Summer of Love, from the streets of 1960’s New York City to the Warhol Factory, Summer of Love blends personal memoir and oral histories from the elders of the queer underground.

On top of all that, Steve and I are developing a ten-episode podcast AND I’m writing my memoir.

THE LOWER EAST SIDE BIOGRAPHY PROJECT is a biography series and oral history archive that Steve and I began in 1999. Our project’s biographies and archive work to ensure that future generations have access to the mad souls of invention that built downtown New York City’s reputation as an incubator for authenticity, rebellion and iconoclasm. On Patreon we present both completed biographies and the raw unedited interviews from some of New York’s most renown artists and culture makers including Judith Malina, Jonas Mekas, Holly Woodlawn, Jayne County, Tom O'Horgan, Tuli Kupferberg, Sarah Schulman, Danny Fields, Bruce Benderson, Taylor Mead, Betty Dodson, Steve Ben Israel and many, many more. The LES Bio Project archive holds over 1400 entries.

ABOUT ME Penny Arcade occupies a rare position in the American avant-garde, and now in her 52nd year of performing she shines with an unmistakable energy that only grows year by year. A runaway at thirteen, a reform-school graduate at sixteen, a performer in the legendary New York City Play-House of the Ridiculous at seventeen, and an escapee from Andy Warhol’s Factory scene at twenty, Penny Arcade emerged after a long apprenticeship in radical, queer, rock and roll theatre at the age of 34 in 1985 as a primal force on the New York art scene and an originator of what came to be called performance art. Arcade’s brand of high camp, high content, street-smart, rock and roll experimental theatre showmanship has influenced generations of artists all over the world and her take no prisoners authenticity, humor, honesty and wisdom has made her an icon of artistic resistance the world over.
www.pennyarcade.tv. https://www.facebook.com/pennyarcadesuperstar

FRACTURED ATLAS If you'd like to support my work, but don't like the idea of memberships, you can make a one-time tax deductible contribution through Fractured Atlas. Along with our gratitude, we will send you links to all our Patreon posts. Penny Arcade Fractured Atlas