is creating articles, videos, and books about Mega Man history

If you love Mega Man and want to help me document and preserve the franchise's history, chip in a buck or two! However much you choose to give, your support is very much appreciated! You'll also be awarded the title of "Mega Patron" on the official Rockman Corner Discord!

"Give Me a Free Book!" Tier 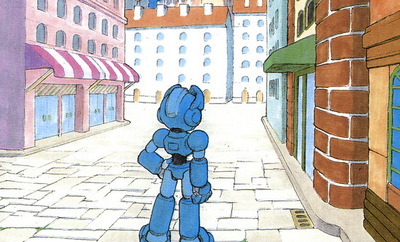 Pledge $10 or more and you'll get my "History of Mega Man Legends" (tentative title) OR my book about lesser-known Mega Man game books for free! I'll sign 'em too, if you'd like!

Patrons at this tier will also be awarded the title of "Mega Patron" on the official Rockman Corner Discord!

About Rockman Corner
Rockman Corner was founded in 2008 as a one-stop-blog for all things Mega Man and Rockman. For 10-years, my blog has featured the latest Mega Man news, reviews, rumors, merchandise, and other odds and ends. My blog has been featured in Nintendo Force, Kotaku (1) (2), Newsweek, and Game Informer. It's even been recognized by Arby's! I've also contributed to the production of official Mega Man goods – many of the books and figures sitting on your mantle right now has a little bit of me in it. I'm tooting my own horn here but 12 million unique readers won't deny it: Rockman Corner is a pretty great place visit if you love that blue robot (or blue Net Navi). And I love, LOVE doing working on it every day.

In addition to bringing you Mega Man news, here's some of the cool things I've done in the past:


About This Patreon
And now I turn to you, dear reader, to help fuel some future in-depth articles and content. As a self-proclaimed "Mega Man historian", a large part of my mission is to collect, research, and document pieces of Mega Man history, and feed it back to you. This includes rare and lost Mega Man media, prototype and beta versions of games, and random odds-and-ends you’ve previously never seen before. The problem is, that can be a costly effort. Yes; I run ads on the site but let's be real – AdBlocker is a thing and it's not going anywhere. That's why I am turning to Patreon to fund future endeavors.

I will be using this Patreon in two ways. The first is to pay for the acquisition of said rare pieces of Mega Man history (prototypes, game documents, media, etc.). Once secured, these items will be thoroughly researched, documented, and preserved for all fans to see. Certain items, after proper documentation, will even be donated to the Video Game History Foundation.

The second reason is to pay translators, video editors, and writers for their assistance and contributions to the production of these articles. Though Rockman Corner has primarily acted as a one-man operation, my blog would not be here today without the help of so many talented, passionate people. Past contributors have translated Japanese articles into English, remastered old VHS footage, and so much more. Going forward, I feel there should be some monetary reward to those who assist in these areas.

To be clear, this is not a paywall to Rockman Corner's original, regularly published works. These updates and articles will not change with the inclusion of a Patreon, and will continue as normal.

THE GOAL
Here are a few upcoming projects that I'm working on/organizing. They could use some of that Patreon-fuel:

Additionally, I'd like to publish a couple "unofficial" Mega Man books: "The History of Mega Man Legends" (tentative title) and a book about lesser-known Mega Man games (Japanese-exclusive mobile games, spin-offs, obscure ports, etc.). These are intended to be long-term projects, mind you. It may take some time!