is creating An Online Searchable Archive of Scottish History

$7.50
per month
Join
Entitles you to a Pen, a copy of C. Waddie's 'How Scotland Lost Her Parliament,' access to our Query Channel on Discord, and our appreciation. Secret Patron-only Videos.
A limited edition hardback of any publication produced with credit.
Will receive a child-friendly illustrated edition of 'Popular Tales' once published. 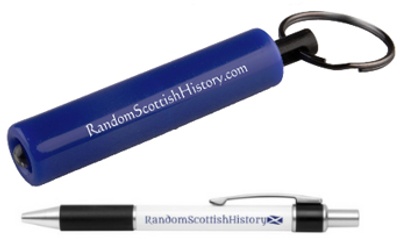 $11
per month
Join
Entitles you to a Pen, Keyring Light, a copy of C. Waddie's 'How Scotland Lost Her Parliament,' access to our Query Channel on Discord, and our appreciation.
Secret Patron-only Videos.
A limited edition hardback of any publication produced with credit.
Will receive a child-friendly illustrated edition of 'Popular Tales' once published, along with a child-friendly print of your choice. 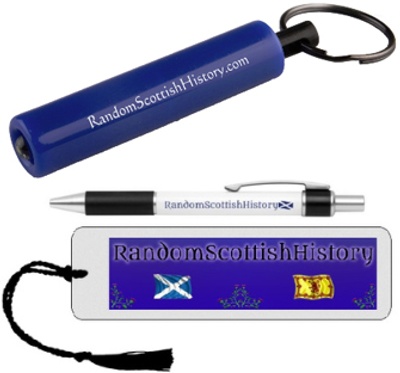 $14.50
per month
Join
Entitles you to a Pen, Keyring Light, Bookmark, a copy of C. Waddie's 'How Scotland Lost Her Parliament,' access to our Query Channel on Discord, and our appreciation.
Secret Patron-only Videos.
A limited edition hardback of any publication produced with credit.
Will receive the option of either a child-friendly or more adult gory illustrated edition of 'Popular Tales' once published with your choice of 3 prints.

My name's Jenny, I'm in my mid-thirties, from Glasgow and I'm your friendly local (as everything online has become) Scottish historian. I began Random Scottish History at the start of 2014 by publishing surprising information I was coming across in my readings of pre-1900 publications. This developed, almost 3 years ago, into a website from which I would publish entire public-domain publications for the benefit of those who may be interested.

To find RSH everywhere we are online, head here - https://linktr.ee/FlikeNoir

My aim is to combat the dearth of knowledge Scots have of their own country's history. Being taught history in school with a British bias means we all know about Henry VIII and his wives, but how many know who was on the Scottish throne at the same time? We all know about Elizabeth's defeat of the Spanish Armada, yet how many know the Spanish asked Scotland to aid them? The fire of London in 1666 was apparently something we should know yet were any of us let in on Edinburgh's more recent fire of 1824?

The goal is to upload as much of my collection of pre-1900 publications as quickly as possible so the information's there and searchable, complete with all illustrations, for whoever's interested. For those books without illustrations we have an exceptional portrait artist, Alex (https://www.deviantart.com/phooney/gallery), on staff to help illustrate events and some of the better-known participants. His name, wherever it appears on the site, links to his DeviantArt profile.

We'll be publishing books every so often when we think there's a subject folk might find of real interest. We were initially going to start by redoing the rescued-from-oblivion Gaelic 'Popular Tales' by John F. Campbell, but that project was usurped somewhat by the surprisingly successful 'Treaty of Union Articles' (https://randomscottishhistory.com/2019/12/19/treaty-of-union-articles-2019/) after being set on that research  by Scottish author, David Taylor.

Newspaper research has become something of staple produce these days, as the information obtained from contemporary reports give more of a glimpse than you’d expect, due to additional details seen as inconsequential at the time - that stand out to us now, into how the population lived. The insight into the minds of our ancestors, as given in numberless opinion pieces, bring us to the realisation that they weren’t so different from us, after all, lapsed epochs notwithstanding.

Patrons will receive limited edition hardback copies of any publications, published during patronage, undertaken by Random Scottish History as well as credit within each publication. Other than the 'Treaty of Union Articles' which, being so spontaneous, was funded by a Crowdfunder, being a Patron is the only way you'll now be able to obtain a limited edition hardback. Patron copies will be sent out as cost price of each publication is reached. New Patrons can of course apply to pay the publication cost in advance in order to receive their copies sooner.

31 of 150 patrons
Initially we planned to get the 'Popular Tales' rewritten and out there as soon as possible but most of our year ended up in the creation of the, much needed, 'Treaty of Union Articles.'

The idea is to take John F. Campbell's rescued oral Gaelic tales and republish them, illustrated by deviantart.com/phooney. I decided on this after obtaining the 4-volume series of books by Mr. Campbell and falling in love with them. In his fully comprehensive introduction to 'Popular Tales of the West Highlands' he cites a few books on similar themes which I also did my best to obtain original publications of. Thus began the 'Library' that's formed the basis for both the Random Scottish History FB page & it's offshoot RandomScottishHistory.com (RSH.scot).

John F. Campbell, of Islay, collected West Highland oral folklore in 1859-60, thereby saving them. The stories had to come from illiterate and Gaelic-only speakers to ensure the purity of the oral tradition as passed down through generations.The goal is to republish these stories. The originals weren't illustrated but, as mentioned, Random Scottish History has a superb portrait artist ready and willing to fully illustrate the resulting stories.

I initially wanted to just publish a few copies for friends/relatives with a single copy of the Gory edition for myself. After the positive reception for the website and talking with folk over the last couple of years about the project, I found it would be a more popular publication than I had initially thought. I also decided to offer the Gory edition as an option for 3rd tier patrons because I know some of you are of the same mind as myself.

In the meantime, we've published the 'Treaty of Union Articles' (2019) which is a compilation of newspaper articles that tell Scotland's story since the union from the viewpoint of contemporary Scots' articles, correspondence, and anecdotes. We're also publishing a 4-volume (with the option of expansion) set of a similar compilation of newspaper articles detailing the story of the railways in Scotland from 1900-1915. 'Scottish Railway Incidents: 1900-1903,' volume 1 is on the cusp of publication. All RSH publications are illustrated by Alex Eeles (@Phooney1).

We also have ideas towards an RSH 'Book of Days' too after its popularity on the site.