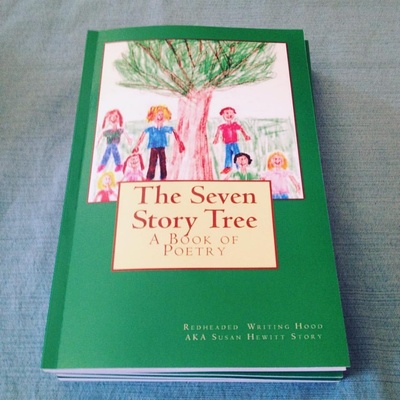 $1
per creation
Join
Get a copy of my first book signed by me!

I will write a poem about you!

$2
per creation
Join
Tell me all about you: what kind of music you like, what you do for a living, what are your dreams? What is a day in your life like? and I will write a poem about you!

It's a whole new world!
It's a different story than I started to tell.

I'm 53 and I was a stay at home mom for 30 years. I have five grown children. My ex and I separated in 2014 but lived together until 2016. I published my first book of poetry in 2015 with Amazon. It's called, "The Seven Story Tree". There's much in it that addresses many different issues like depression, addiction, divorce, religion and spirituality. I take inspiration from The Bible, movies, popular music, poets and authors. "The Seven Story Tree" has five stars on Amazon. My latest book is actually a poem from "The Seven Story Tree" called, "What Elephant?" it a children's book that was illustrated and published with Page Publishing who I PAID over 3k and then they only paid me $2.79 for each book I sold online and said I only sold four copies in 2017! Then I ended up seeing my book for sale all over the internet but they ended up only giving me royalties for FOUR books! I am furious and would like to sue them but financially I am unable to at this time. I had to find and hire and new lawyer for my divorce because the first one I hired was so shady: she without my knowledge DID NOT put alimony in my paper work after a 30 year marriage where he wanted me to stay home with the children NOT have a life of my own. He only wanted me to get a job at the end because that was really the only legitimate complaint he had against me, like I didn't contribute.

I moved out of our big house in 2016 and continued to apply and interview for many and various jobs. I started donating blood plasma twice a week in 2016 also. Sometimes my protein gets too low and I can't for awhile but when I can it helps a lot. I can make $70.00 a week, sometimes more when they offer bonuses.

I traveled more since my separation because my ex wouldn't take me anywhere (And also didn't want me to go anywhere much) but to visit our families: convenient (and vaca like) because they live in Florida and California. He said (when I brought up my desire to travel) for me to get my passport though, that he'd take me on a cruise for our 25th Wedding Anniversary; that was in 2011. I was finally able to use that passport in 2014 (AFTER we separated) because my sister-in-law invited me to go to Niagara Falls with her and we walked over the Rainbow Bridge to Canada. I went on my first cruise in July of 2017 to the Bahamas (The Jesus Freak Cruise), then right after I went on my first Missions trip to Mexico with the Newsboys. (God's Not Dead Missions) It was because of someone I met on that first cruise that I got a deal on my second which was the K-Love cruise in January of 2018 (To the Bahamas again). And then the summer of 2018 I drove to California to do the Switchfoot getaway and visit some of my family out there, then I went on the Newsboys Mission trip to Baja California for the second (and probably the last time for me). I was supposed to go on another K-Love cruise in January of 2019 but because of financial difficulty and not being able to leave my Home business (Airbnb) I sold it to a friend I knew from the Missions trip. Since that trip to California and Mexico I haven't been able to travel much except down to Disney for a few days with a friend (2019). I used to manage our finances and we had good credit which I used for these trips and to pay Page Publisher's to publish, "What Elephant?" also to pay my shady lawyer (Hynes) who I had to fire. In my divorce settlement I got alimony because I hired a new attorney who re-filed the paperwork with the court house but I also got these other credit cards that I had to pay off- which was fair but also made my debt double from 20K to 40K.

I did some temp jobs but always continued writing: I started renting out rooms in our smaller house that I live in with Airbnb and did that from November 2017 until July 2019. I continued to try for a "regular" job and even drove for Uber and Lyft for a short while. My divorce was finally final in September 2018. Now I am planing on selling the house which now belongs to me, paying off my debt and buying an RV to travel around in while I decide on where I want to settle. I'm learning and growing and would like to do more on YouTube, so I might eventually start actually making some money!


#‎CallmeRED
We're always in it
I see it
I face it
I put it on
scarlet or vermilion or bluish red crimson
Old ladies with hats are winsome
Valentines, Christmas, cars,
Leaves of Fall
Team colors
It symbolizes blood and courage
“Come now, and let us reason together,” Says the Lord,
“Though your sins are like scarlet, They shall be as white as snow;
Though they are red like crimson, They shall be as wool"
Esau was red and so was his stew
God didn't chose him but He chose you!
The Sea was Red the Israelite's went through
I said I didn't love you
But I lied
I thought you knew
I couldn't have put up with all that crap we went through
Without HIS LOVE which ran red
Your cold hearted rejection cut like a knife
My blood ran red
So I wanted to hurt you too
Why don't we remember the good times?
You always focus on the bad
Never speak life to me
So sad
Left me starving for attention & affection
Does anyone think I'm good or fair?
I won't live in regret
We were all "meant to be"
Five beautiful children
Don't you see?
The thought of losing you
could leave me so brutally blue
But no just as Taylor said
Loving you was Riotously RED!