SaltyJustice is creating content you must be 18+ to view. Are you 18 years of age or older?

$1
per month
Join
You get the undying thanks of the team, access to the patreon feed, and access to the game's builds. PLUS, the knowledge that your courage is making this game a reality.

During public releases, you'll also get access to the cheat mode when everyone else doesn't! Hack the planet!

$5
per month
Join
Vote in our periodic polls. You will decide which features get added and in which order.

We try not to pester you unnecessarily, but we often have our pick of which order to implement features. 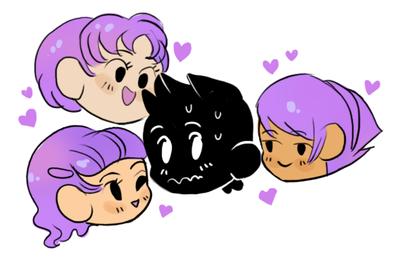 $10
per month
Join
Your name will go in the game's credits as a backer! I'll ask you which name you'd prefer to go under and add you to the next build's credits list.

Is yet another game developer asking for your money? Yes! Hi, I'm Salty. I've been coding for 17 years now and making video games professionally for 5 years. I want to use that experience to make better ecchi games.
New patron? Please look at this post for information about Debug Mode.

House of Pandemonium: Remastered is an ecchi RPG that pits cute girls against cute monster girls. It started as a passion project (in more ways than one) but has evolved since then. I hope it will become one of the best games in the ecchi genre, the kind of game that makes even mainstream developers take notice. I’ve been working hard, adding new characters, areas, mechanics, and story.

Unfortunately, I cannot subsist entirely off of snow and tree sap (at least according to my doctor) so I need your support. I’ll be using my patron funds to hire additional artists, and to keep my landlord from throwing me into the river.

String Tyrant is a game featuring dolls, claygirls, violence, card-combat, and much more. It can be purchased for 5$ on itch.io or Steam, or acquired free by becoming a 5$ patron.

Current Public Release: A free demo can be found on the itch.io page
Current Patron Release: Version 1.04
Next Release: Game is done!

By becoming a patron, you will be directly responsible for adding new content to my current project. I will be releasing budget statements each month for the public to see how I'm spending the money. I’ll also be posting development notices every week, working hard to fix bugs and reply to questions or comments.

If you're feeling like leaving a tip but don't necessarily want to become a patron for some reason, you can use this Paypal address:
Paypal.me/SaltyJustice

Anyway, thanks for reading, and I look forward to making awesome ecchi games for you!

$1,078.42 of $1,400 per month
Programmer Funding
My survival is cheap. At 1400/month this becomes my full time job. I'll be able to afford rent, food, and (most crucially) diet soda. This means that the artists and programming are fully funded.