$1
per month
Join
Every little bit helps bring Eli closer to making his visions a reality! We know there are folks who wish they could give more but to us it is our small donors who make all the difference in the world! 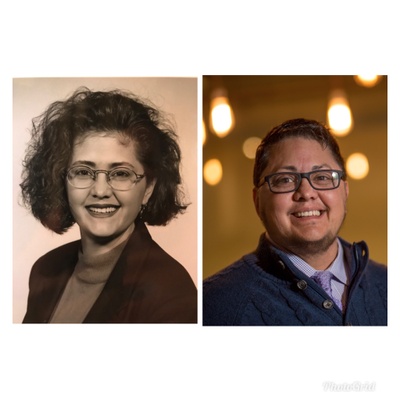 Sign up as a $5 a month patron and we will send you one 4x6 autographed image from Eli Rigatuso's transition collection! This image will highlight a key date/time in his transition! The example image is of Eli taken in the early 90s on the left and in 2018 on the right. He will personally autograph the image for you as well!

As of December 2nd, 2019 while supplies last sign up and stay a patron at this level for a minimum of three months and receive a Protect Trans Kids Rainbow Batman 2x2" acrylic magnet for your refrigerator or filing cabinet at work!!

$10
per month
Join
At this level you will gain insider info! That's right we will give you access to videos created solely for you! Once a month we will create a 1-2 minute video that can only be seen here on Patreon and you get access to this monthly video because you're a pioneer!

About Speaking Of Happy

Speaking of Happy is a virtual outlet documenting the amazing stories of lesbian, gay, bisexual, transgender, questioning or queer, and intersex (LGBTQI) people and our community allies! These stories will be part interview, encompassing stories from all walks of life, and part real world as we follow these courageous people in their lives. We will hear from their family and friends about who they are in the community and share with you some of their trials and triumphs! We will also be publishing our podcast of the same name.

This channel is also going to focus on the mixed media art of Eli Rigatuso as he takes on a massive project that will challenge the way we all see the gender binary! Mr. Rigatuso believes the binary is bullshit and he is committed, through his art/photography, to help all begin to unpack their personal commitments to the gender binary! Rigatuso would love to help facilitate a world that is more open and affirming of all people, most importantly those who are transgender and non-binary!

Eli Rigatuso is an Omaha, Nebraska Native as well as of indigenous descent and identifies as Two Spirit (Menominee/Sioux) Transgender Masculine queer man.  Rigatuso has more than 30 years of experience in the broadcast news and production arena and owns/operates a video production and photography company since 1995 and has worked for local TV affiliates KMTV 3 and KPTM Fox 42. Eli has also spent a year helping Omaha residents make their way safely to and from work doing Air Traffic reporting!

Rigatuso is an outspoken Equal Rights Activist who has served his community in a variety of ways since the mid 90’s. Serving on the board and as the President of Heartland Pride from 2009-2013, a local 501c3 non-profit. Heartland Pride hosts The Pride Festival in Omaha. Rigatuso was one of the founders of the organization and was an active board member for 4 years. He was instrumental in fundraising for the campaign against 416 back in 2000.

Rigatuso is currently serving on the Advisory Council to the Omaha Mayor and was instrumental in creating the council as well as committed to Omaha creating an LGBTQ+ Resource Center! A place where we can find a connection as well as access to much-needed services and support!

Rigatuso is currently working full-time at Bellevue University and spends most of his free time on Speaking Of Happy. He is writing a book about his own transition journey as well as creating and hosting Speaking Of Happy LIVE!

Here is a short video of Eli sharing about some of his journey to letting himself be free and express his identity as a transgender man after 50 years of expressing as something else.

18 of 25 patrons
When we hit 25 patrons we will do a drawing for one lucky patron to receive a Speaking Of Happy t-shirt!
1 of 3

Recent posts by Speaking Of Happy