- Optional credit in the final version of Dog Airport Game!

- I will add a dog of your choice to the game*, as long as you own the rights to their Very Good Photo!
- Work-in-progress builds for Dog Airport Game, updated monthly (or more)!

- Optional credit in the final version of Dog Airport Game!

*Must be a Patron at this tier for three non-consecutive months.

There’s a public Discord channel, and Patrons can go #barkstage.

My name is Xalavier Nelson Jr., and you might know me from my work on Hypnospace Outlaw, SkateBIRD, Can Androids Pray, or a dozen other things across the world of gaming. My next project is a first-person open-world comedy adventure game called An Airport for Aliens Currently Run by Dogs, and you can help me make it! 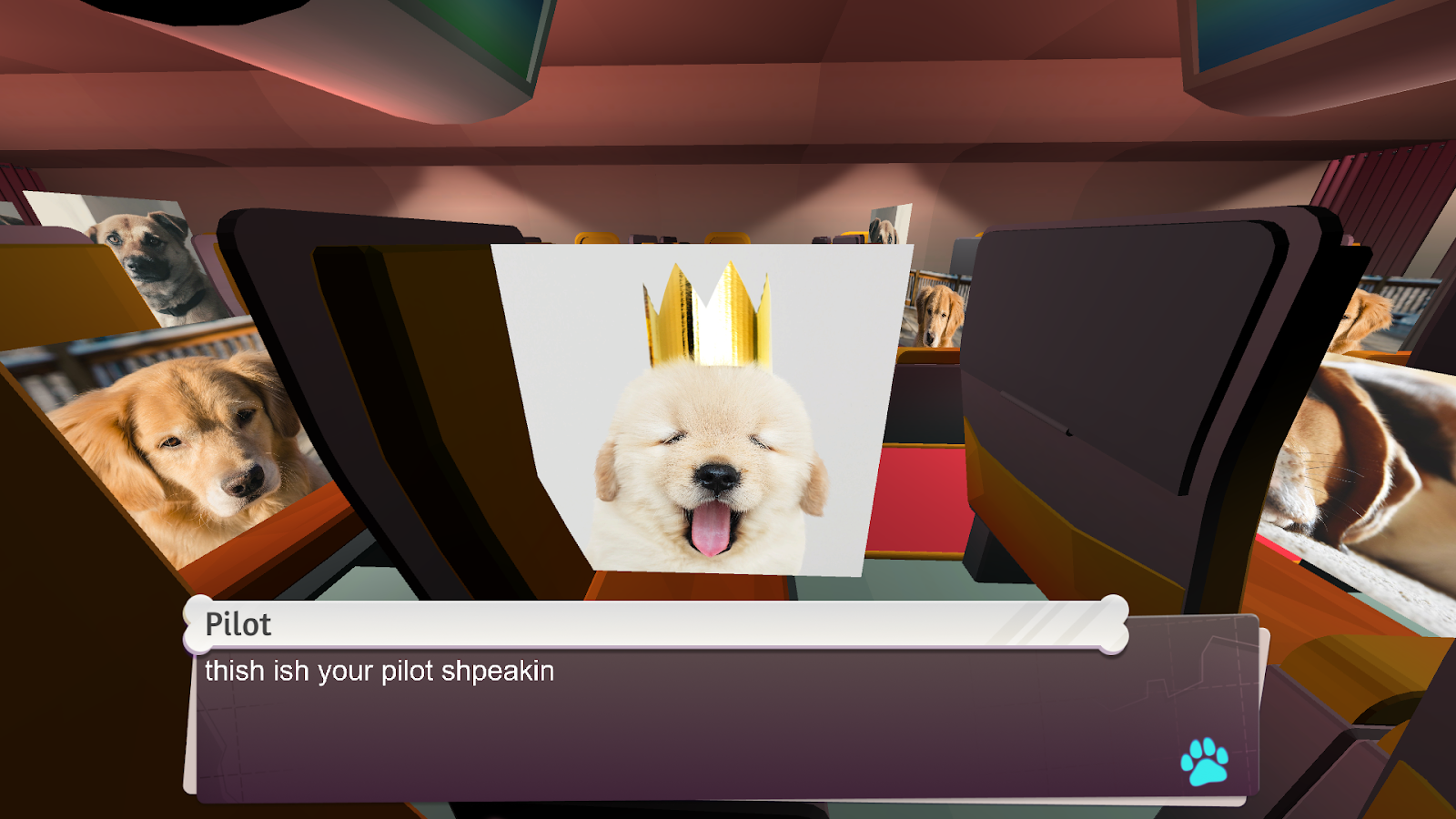 Your pilot, clearly not piloting.

An Airport for Aliens Currently Run by Dogs (AKA Dog Airport Game) has two layers. The first layer sees you going from airport to simulated airport; talking to stock photo dogs, translating an alien cipher language, completing weird quests, and discovering ways to pass the time between your next flight. The second layer is about finding time to reconnect with your partner, Krista, who constantly has to travel for work.

You make plans at one airport, and meet each other at a different one, because your entire lives are caught up in these transitional spaces. No matter how much you love each other, all you have - all you can get - are these small slices of time. 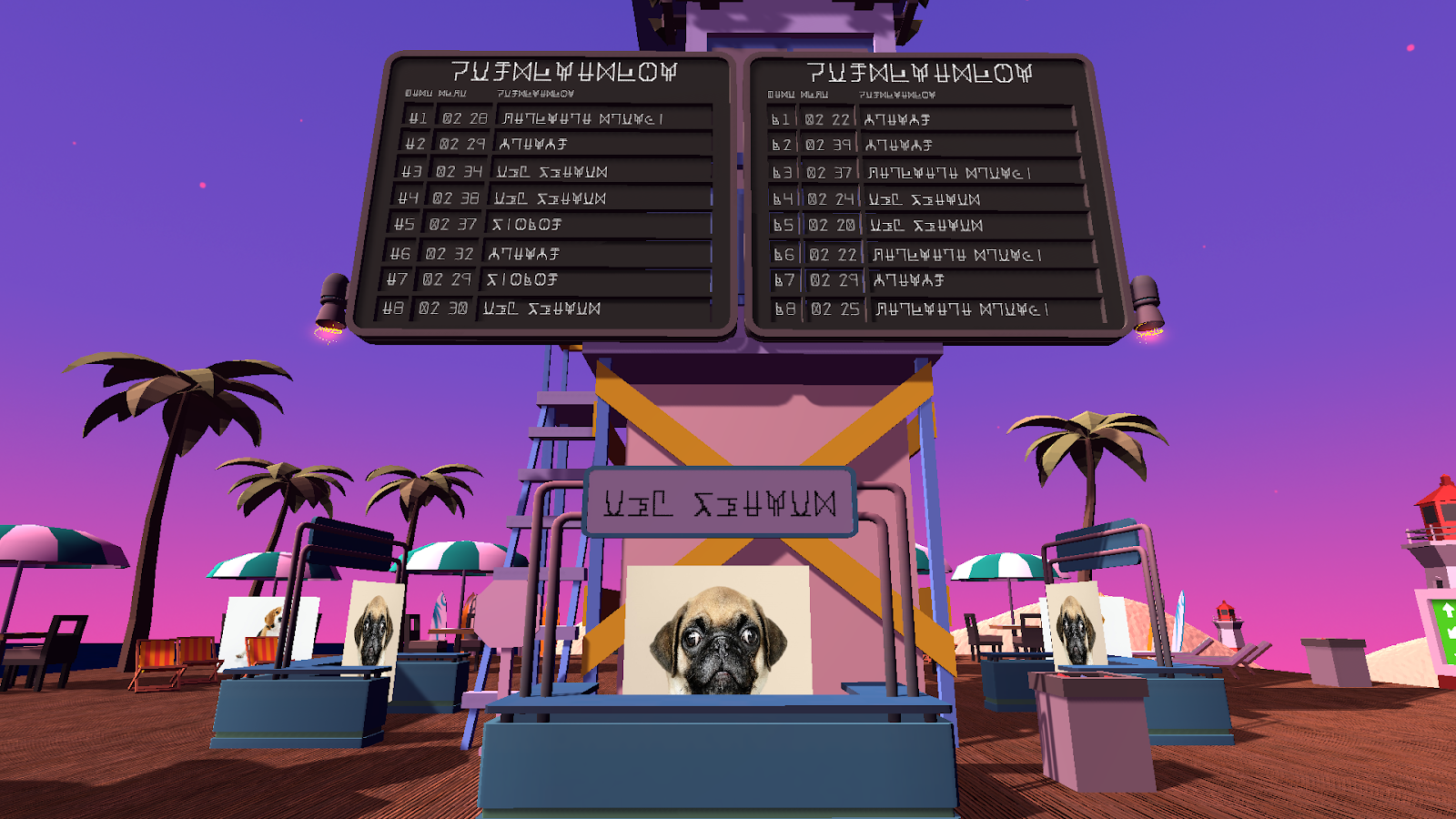 Partially helpful signage: just like a human airport!
This project single-handedly made me love making games again, so I’m going to get real for a second: My brain works better when it’s creating things that people will see today.
Not in a month, or in two years - now.

Dog Airport Game made its playable debut at the NYU Game Center No Quarter exhibition, and after that ended with stunning acclaim, I had a wild idea. 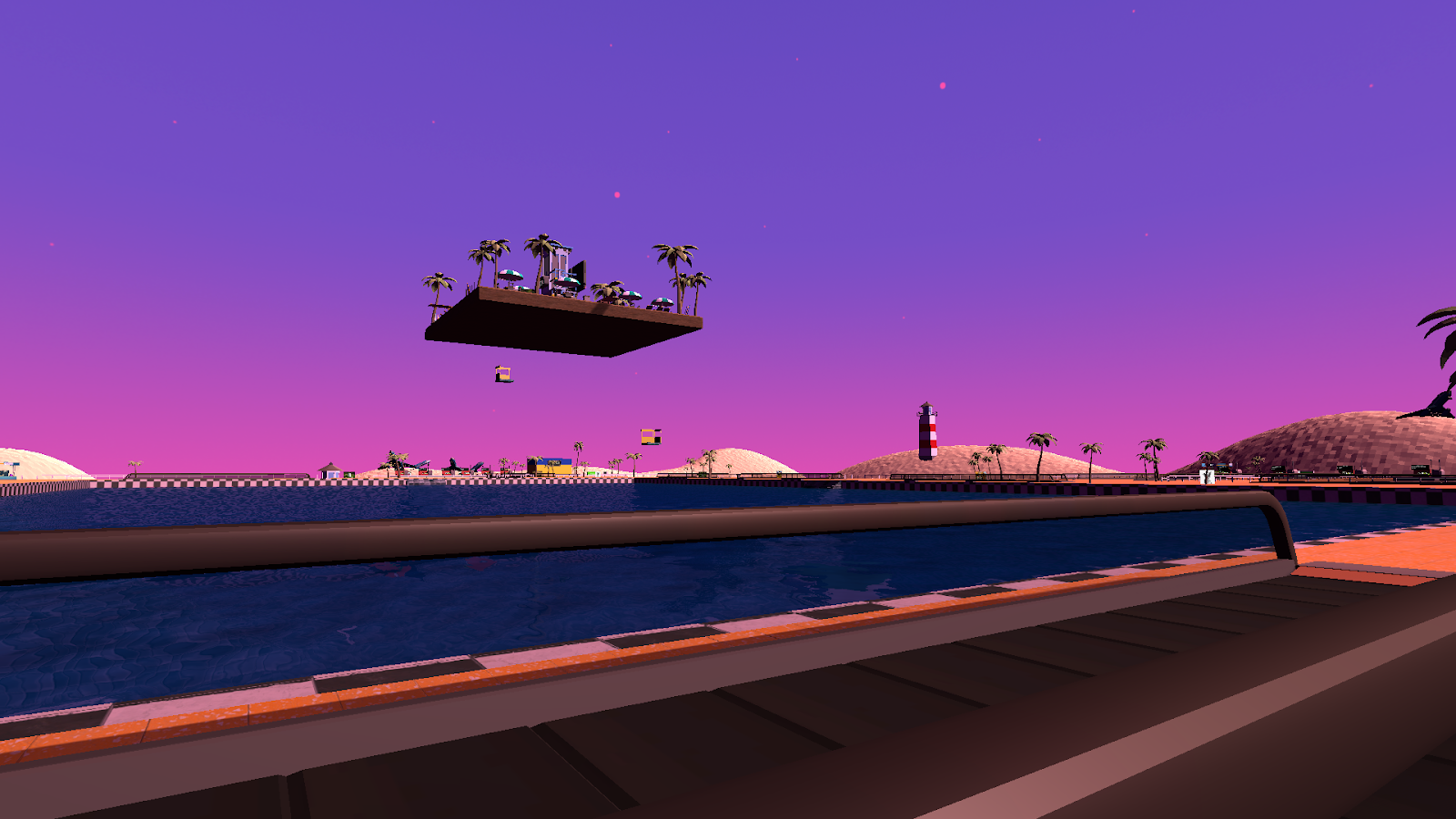 Poolside on the vaporwave beach planet
Instead of working on Dog Airport Game for another couple years, only occasionally doing a tweet about it for that sweet, sweet validation, what if people could play it as soon as I talked about it? What if they started with an upgraded version of the No Quarter build--a single airport filled with shops, dogs, and an alien cipher language to translate--and watched it grow, as I add new elements to this world every month? New dogs, new shops, new airports, new puns... 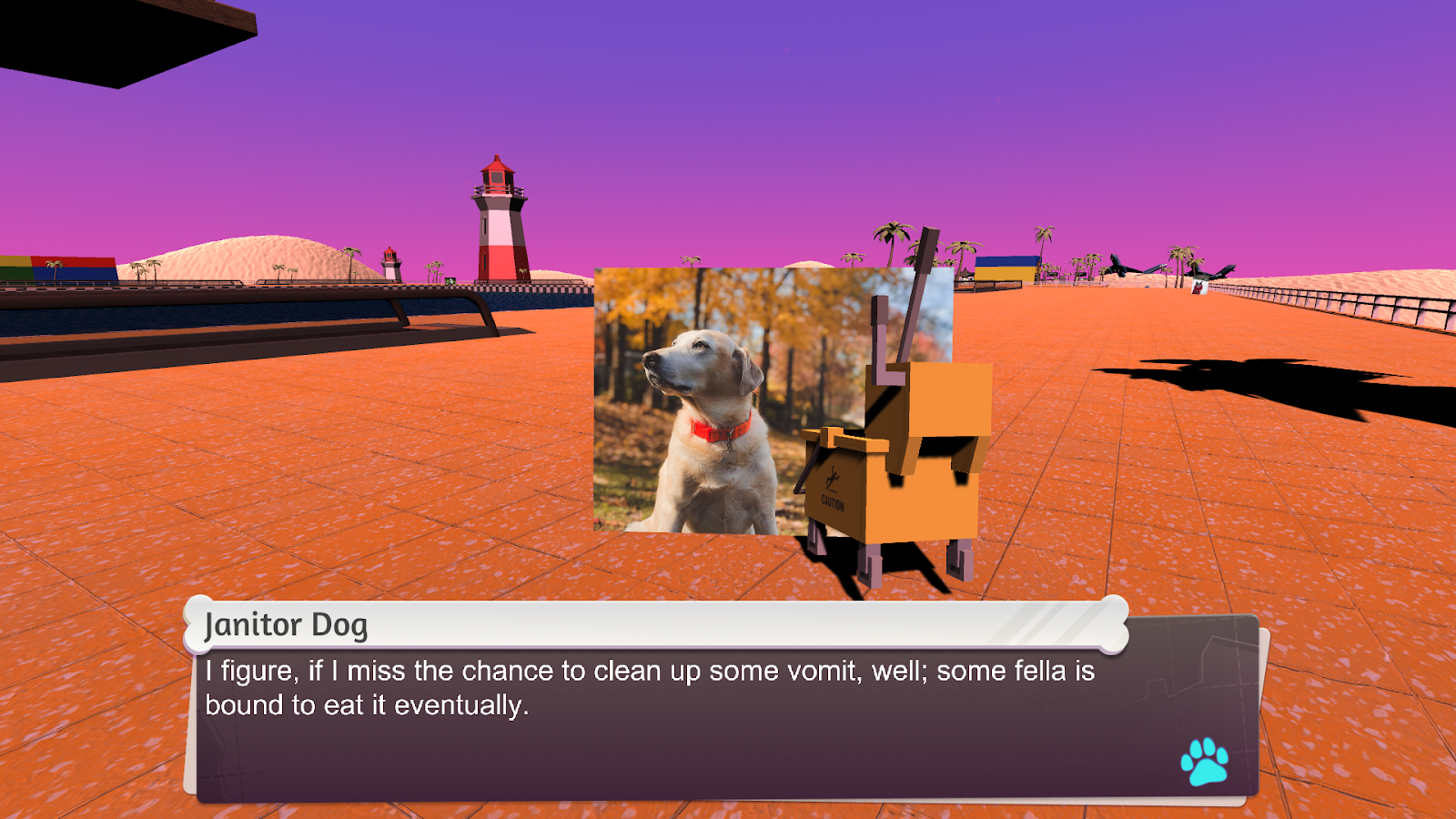 Perspective from Janitor Dog.
I am blessed to find that people care about whatever strangeness I come up with, so... what if they could get it today? 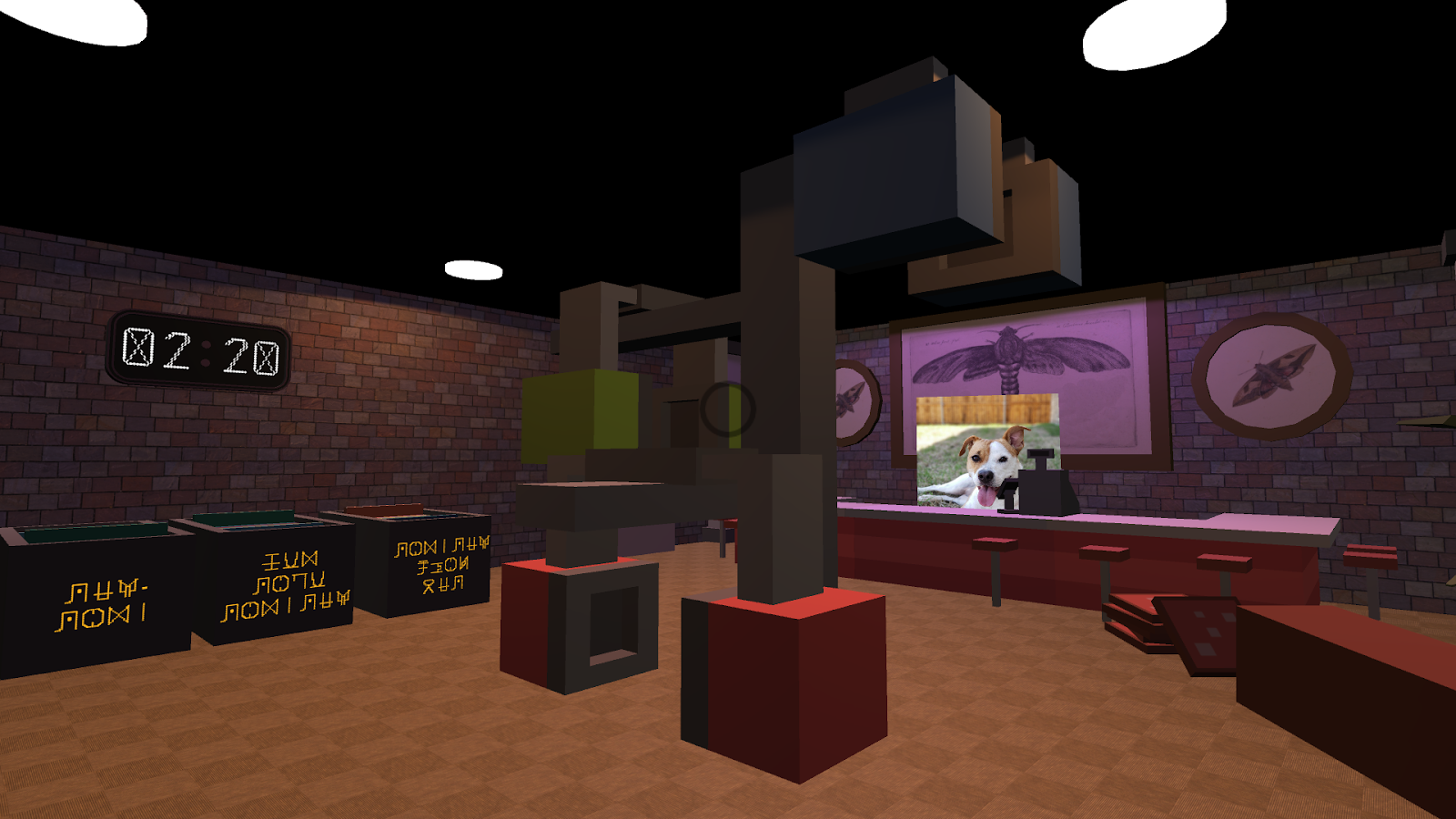 The moth man-themed record shop, filled with gags that only make sense if you’ve translated my fake language, because I thought that was a good idea for some reason.
That’s what this Patreon represents. Any proceeds will go to support my work and collaborators, on Dog Airport Game and beyond, but more than anything, this is my way to get you whatever wild thing I’m dreaming about as soon as possible.

Whether you join me on this journey or not - thank you! 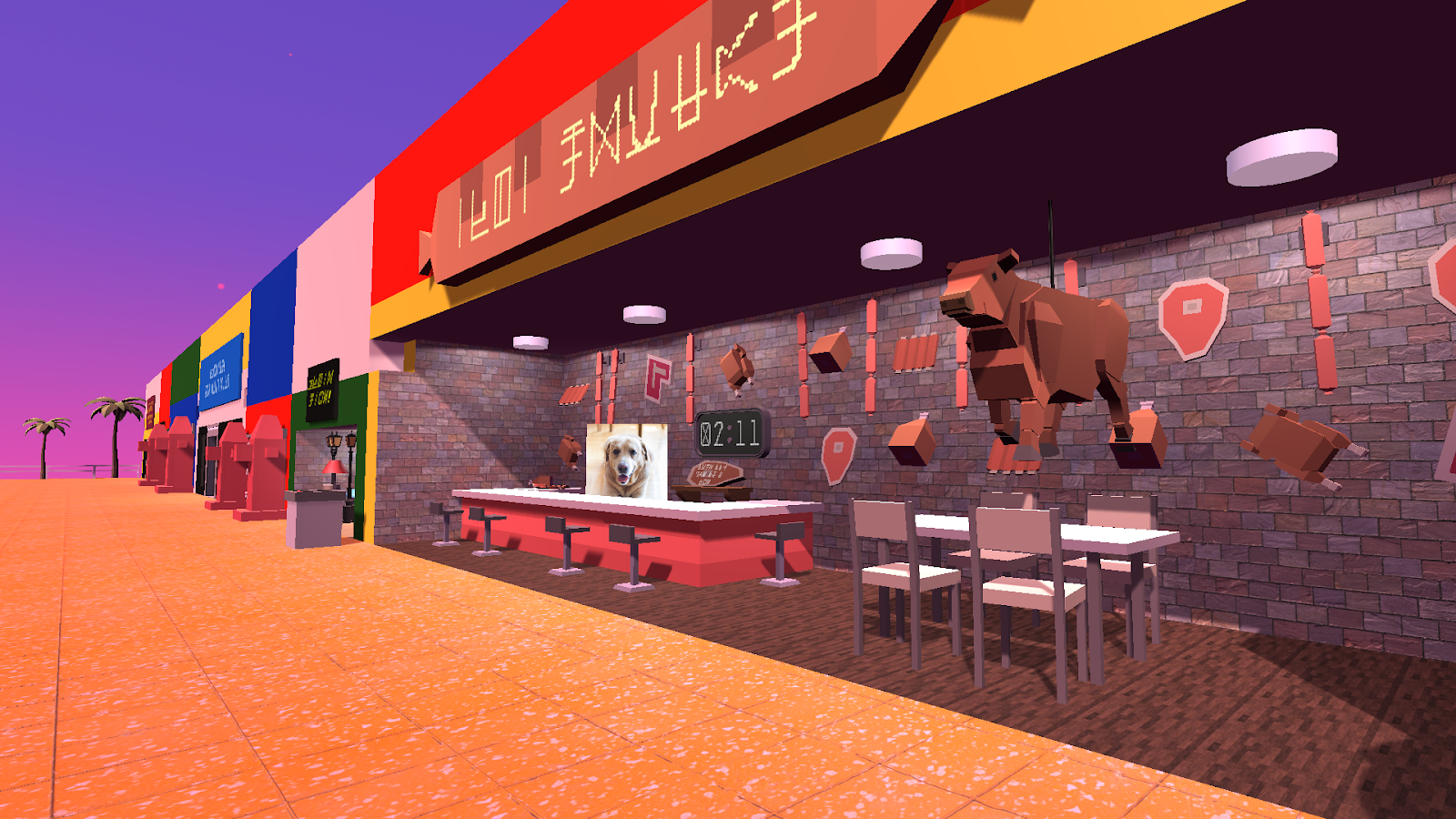