Stuart Gipp is creating content you must be 18+ to view. Are you 18 years of age or older? 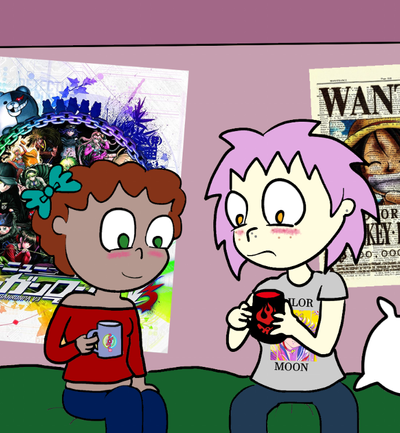 $1
per month
Join
Early access to comics and episodes as soon as they're done. Admittedly, this is often not massively long before they are published. But hey! Also, see behind the scenes and exclusive stuff. You'll also receive access to and a special title in the Gippscord Discord server.

In addition to this, you will get access to EVERY DIGITAL PRODUCT I put out on my Gumroad store, absolutely free.

Hullo. I am Stuart Gipp. That is my real name, that is not a handle or a clever pun. I am a man who makes comics, videos, podcasts and games writing. I live in Cambridge, England.

Merry Hell is my most prominent project, a daily webcomic about the rigours of transitioning to the adult world whilst already an adult. Love, work, pain, sex and little purple bows.

Stuart Jam is my real show about unreal videogames, in which I am represented by an avatar of myself who dresses as badly as I do. I like to talk about videogames, I like to avoid or ignore community politics, and I like to make silly jokes about willies and bums. I like to extol the virtues of under-rated things, and will often heavily praise things widely considered to be crap. Stuart Jam is the successor to Stuart Gipp in Video World.

I also make a show called Franchise & Lows, in which I take a look at a selection of games based on a particular franchise and analyse their respective quality.

There are two episodes of Stuart Jam, fifteen of Franchise & Lows and eighteen episodes (including specials) of Video World

I also write about an eclectic spread of videogames over on Retronauts multiple times a week.

I write reviews and features for Nintendo Life.

Overfiend Comics are often NSFW, very silly and slapdash and come out approximately whenever I feel like making them. I also co-write the webcomic JE-NL (drawn by Salem Sloane).

A major project for me and Salem is The Terrifying Tales of Tabitha Faust, an all-ages webcomic.

The Ken and Stu Show is my podcast with my mate Ken Lauder; it's also on iTunes' Podcast app. It's a lengthy, involved show in which me and Ken discuss and debate movies and TV. There's also a lot of talking nonsense, or "banter".

Arseholevania is my gaming podcast with Andi Hamilton in which we craft the worst possible take on a given game or subject, then Tweet it and watch the fireworks.

Animanichat is my cartoon podcast with Luke Fletcher in which we review every single episode of Animaniacs, which I hate to death.

I also make digital products; comics, collections of podcasts, etc. These are available on my Gumroad store but I will be making all products free eventually to patrons.

Thank you for your interest and especially thank you if you decide to support my Patreon.