is creating Horror Games and More

Welcome
Hello! We are two creators who teamed up in the February of 2018 to bring Concluse to PC, Mac, and Android. Since then we created short horror experience The Emulator for Scream Jam 2018, in which it won both Best Game and Scariest Game. We are now actively developing Concluse 2, and we have plans for numerous other projects after that. Our projects include controller support where applicable, along with mobile ports to Android when feasible (iOS may be possible in the future).

While some of our future titles will be paid, our releases thus far have been free to help us reach as many horror fans as possible. Patreon allows us to accept donations to help us with varying development costs, while being able to reward those donations with behind the scenes looks and other rewards. We would love to create a community around our games, and we appreciate you joining that community. Take a look at our currently available works below:

Scream Jam 2018 Winner
The Emulator
When Sean's new girlfriend invites him over for dinner, the last thing he expects is a fight for his life! It's the night before Halloween and a new terror is about to be unleashed from the deep web! The Emulator!
Itch.io - GooglePlay - Steam
CONCLUSE Android Port
You won't find your typical jump scares here; there is something deeper at work, something which begins to bridge the gap of what is real and what isn't. Experience PS1 era horror on your mobile device.
GooglePlay 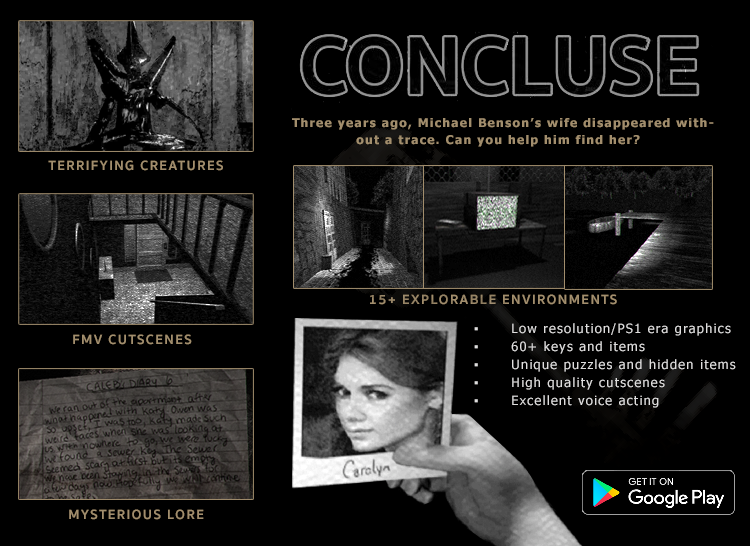 CONCLUSE
After three long years of searching for his missing wife, Carolyn, Michael Benson is at his wit's end. Just as he is about to throw in the towel and end his search, he receives an anonymous tip on his answering machine. The caller claims to have seen Carolyn in 'Hell', a strangely named town in the boondocks of New England. With little else to go on, Michael sets out for 'Hell', could his wife really be there?
STEAM - Itch.io - Trailer