The Printing Goes Ever On

The Printing Goes Ever On

$6
per month
Sold Out
The elves were the first race to appear, sailing on their silver ships.

And as the elves, you were here first, supporting from the start. Thus, you receive all Ranger tier benefits, at a founding-father (or mother!) exclusive price.
Includes Discord benefits

$8
per month
Join
or save 16% if you pay annually
The People of the Realms thank you for joining the fight against the forces of evil!

By supporting at this tier, you will receive a monthly, themed pack, containing:
You will also get a 30% Discount Code for all models (active for first two weeks of each month). You can use it both on our store and on MyMiniFactory.

Supporting also grants you access to the Welcome Trove, which contains:
Each patron can participate in polls, shaping the future of our adventure!
Includes Discord benefits

$20
per month
Sold Out
Wizards have the power to shape reality with just their words, helping the People of the Realms.

And so do you and your printer(s), forming matter into miniatures for others in need! Supporting at this tier grants you:

About The Printing Goes Ever On

Join the Adventure and collect over 40 STLs!


To celebrate our collab with Black Magic Craft Youtube Channel, we're offering a huge discount to new Patrons. Join in April and get the Modular Dwarven Customizer featured in Jeremy's video for just $8! What you get with the chapter:
$27 DISCOUNT CODE FOR THE MODULAR DWARF CUSTOMIZER ETERNAL ACCESS.
Basically, a chance to get previous month at the standard Patreon price!


All miniature models come pre-supported and as clean STL files. Terrain models are supportless.
This is our second modular bits bundle for our Interactive Modular Mini Customizer, featuring elements to configure your Dwarf roleplay characters or NPCs, skirmish warbands and wargaming regiments.
Join and enjoy the limitless export options in our Interactive Customizer! Want to know more about the app? Visit the FAQ blog post here.
The bundle gives you access to the bits in the Customizer, with the following export options:

Join our Patreon and let the journey begin!

Stay with us till April and collect the Giant Eagles bundle! To celebrate the new Longstray Gift system, we are making a one time only occasion and adding the Giant Eagles to everyone who stays with us just 2 months in a row! 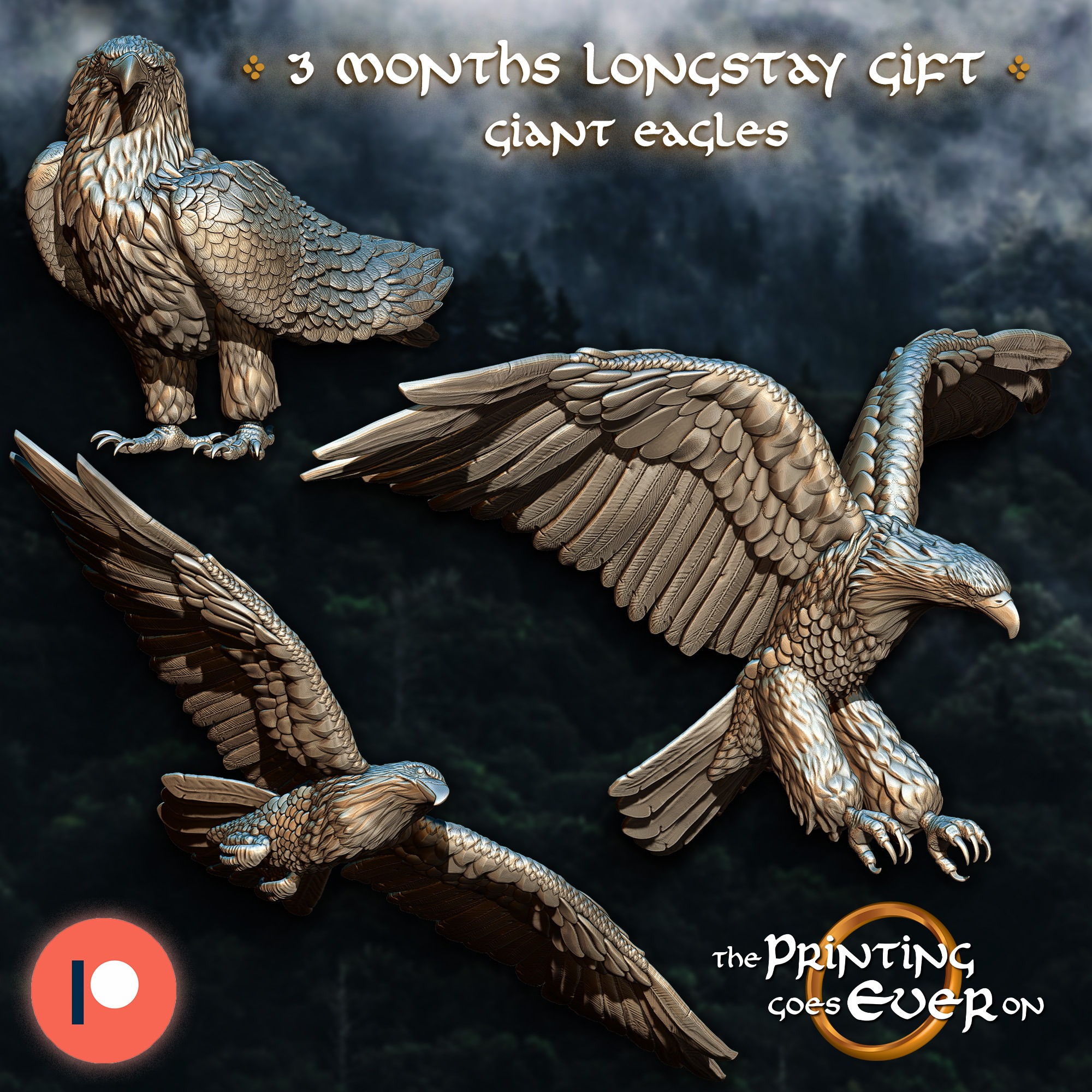 Take a look at our models and releases on our homepage:
https://www.theprintinggoeseveron.com/


We are Maksym Mikołajczyk and Nelly Pietruszewska, all-round creators from Poland. We set out on a journey to provide you with high quality 3d printable miniatures. In our designs, we focus on a modest, believable style, in contrary to common exaggerated embellishments and proportions present on miniatures.

Each month we provide you with:


Each patron also gets access to the Welcome Trove, holding eighteen miniatures of the heroes, who bravely set out on their quest. Each model with a statblock, plus an interior battle map to house them. 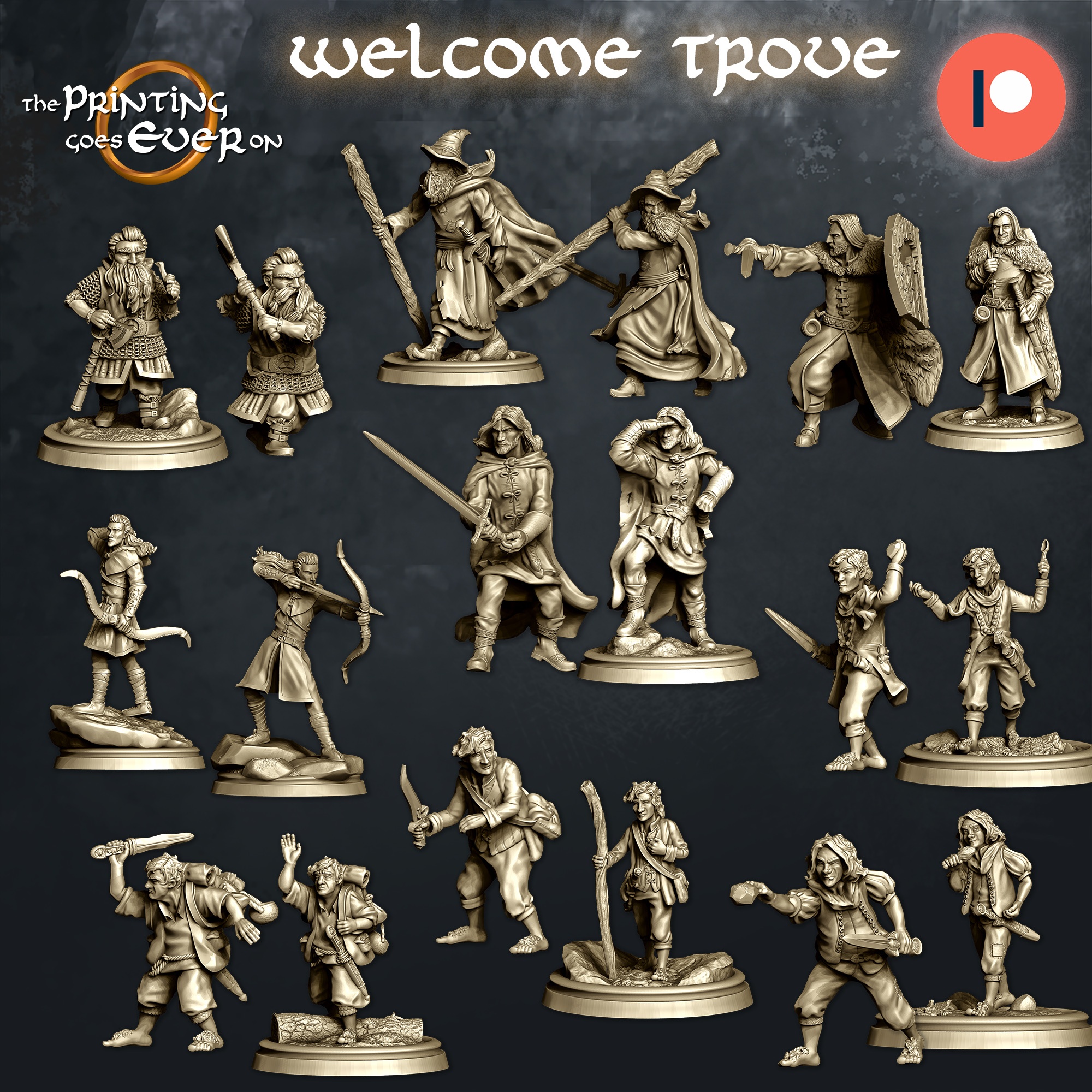 The Welcome Trove contains the Nine Heroes in travel and combat poses, up to a total of 18 pre-supported STL models and a wide range of sculpted bases.
All Patrons are gifted the Welcome Trove the moment they join our Patreon!
We present the characters:

All bundles are added to your Patreon-linked library automatically, so you don't need to worry about downloading them before the end of the month!


The miniatures could make compelling NPCs, monsters and player characters for RPG sessions, e.g.  Dungeons and Dragons. You could also use them as proxy models for skirmish and strategy battle games, like Frostgrave and The Lord of the Rings / Middle-Earth SBG.

Reaching 1K wonderful supporters, we'll be be able to afford making more models per month to enrich your tabletop adventures!

Recent posts by The Printing Goes Ever On