is creating video games and a custom-made engine

$1
per month
Join
Thank you for your support! Even just a dollar can really add up.

You get access to patron-only update posts about the engine and game.

Also, if you'd rather send a one-time donation instead of committing on a month-to-month basis, that's okay! You can use this link: paypal.me/DavidEddy

$5
per month
Join
You get access to a private discord group with the team where you can ask questions, can see what we're working on and contemplating, and are invited to private livestreams about the game and engine.

Plus the previous reward.

$10
per month
Join
You get access to the compiled engine and test builds of games we're working on, including Thera!

Help us develop our games and the engine by finding bugs and requesting new features. And as soon as the engine is in full working order, make your own games!

Hey everyone! I'm David, and I'm the lead developer of this project. You might already know me by my usual username, BlackJax. I've been modding games and programming mod tools for the past 8 years or so and finally decided it's time to make a full game on its own custom engine! I enjoy all aspects of game development and want to do this as my job, full-time.

The game, currently entitled "Thera" (pronounced thair-uh), is a sci-fi fighter where you defeat opponents in open environments by utilizing both melee weapons and guns along with your characters' special set of attacks and abilities (and weaknesses).


"Hold on, back up for a sec. Did you just say you're writing a custom engine?"


Yup! I've already spent a good deal of time deciding between using an engine already out there or writing my own, and I figured writing my own would allow me to tailor it to my exact needs, provide me with more new experience, and help me avoid having to work around bugs in other engines that I can't fix myself. It's written in C#, as that's the language I've gained the most experience with and I can write very quickly, along with OpenGL, OpenAL and Bullet Physics. I've written code modularly so that other libraries for rendering, sound and physics can be supported later and easily swapped in without any major architectural revisions to the engine. Engine documentation will be available to patrons under the "Engine Users" reward tier.

Our priorities are as follows:

The story goes a little like this - there's an advanced society that lives in a city called Thera. Outside the border of the city lies a vast wasteland inhabited by people who are not of Theran blood and are not allowed to enter the city. You play the same linear story through two viewpoints - a female character from inside the city, and a male character from outside.

Your journey(s) revolve around an experimental biological weapon. This device merges with its host to provide them with tools, virtual storage, and physical and mental modifications/upgrades.

In short, you (both characters) wind up with one. Pretty cool, right?
But there's a catch.
They're killing you both slowly, and the Theran government wants them. You're simultaneously on the search for a cure to save yourselves while also highly wanted criminals running from the government for "stealing" a top-secret weapon.

As you carry on with this search, you begin to uncover the backstories of the characters you play as, you will meet an assortment of characters who join your team, and you slowly discover who the Theran government really is. You learn that the weapon that's killing you is a stolen experiment and there are many more dangerous experiments just like it out there.

"Okay, okay. So what about the actual gameplay?"


Well, when it comes to gameplay you've got:

Concept art for the in-game HUD: 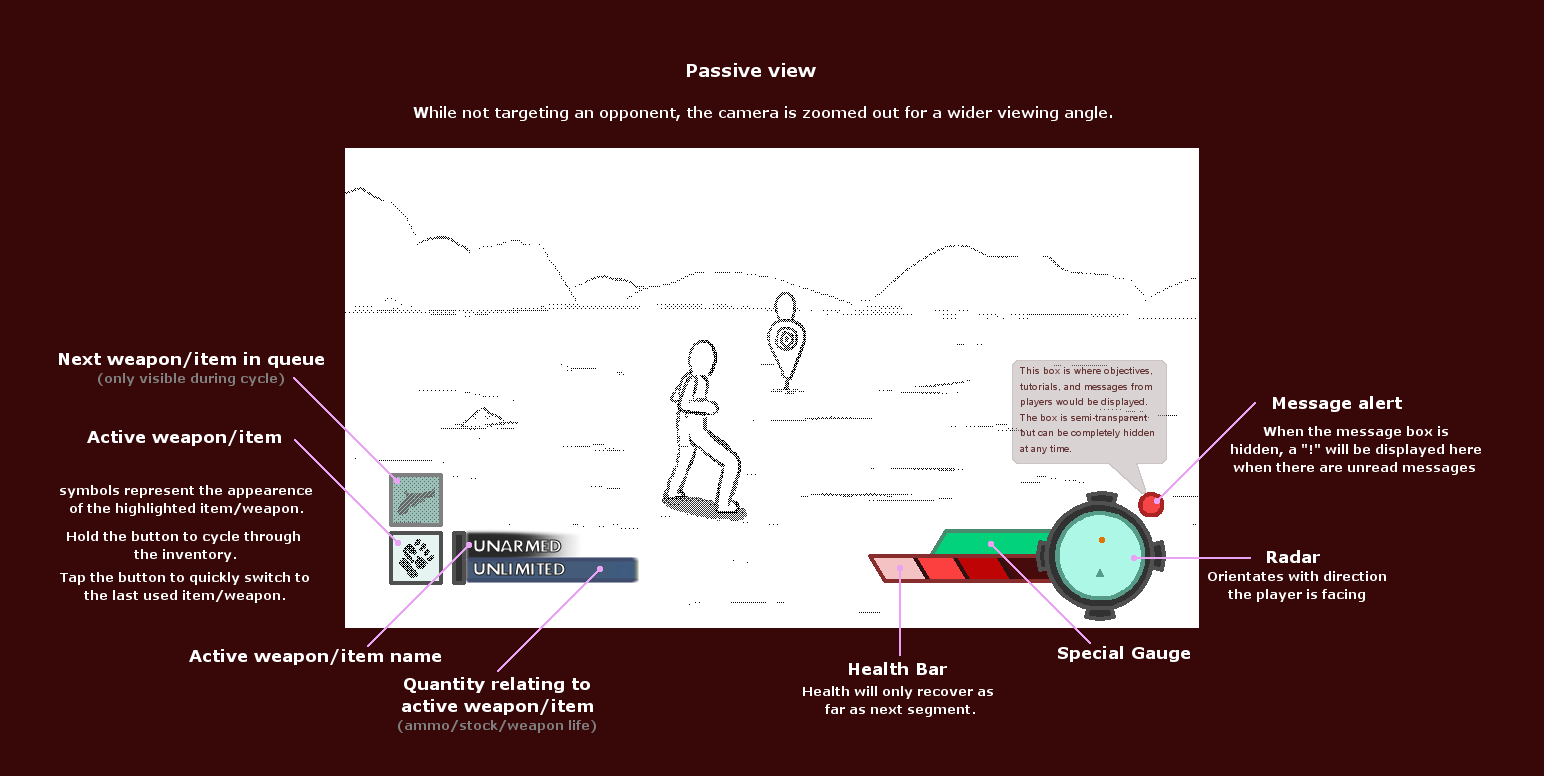 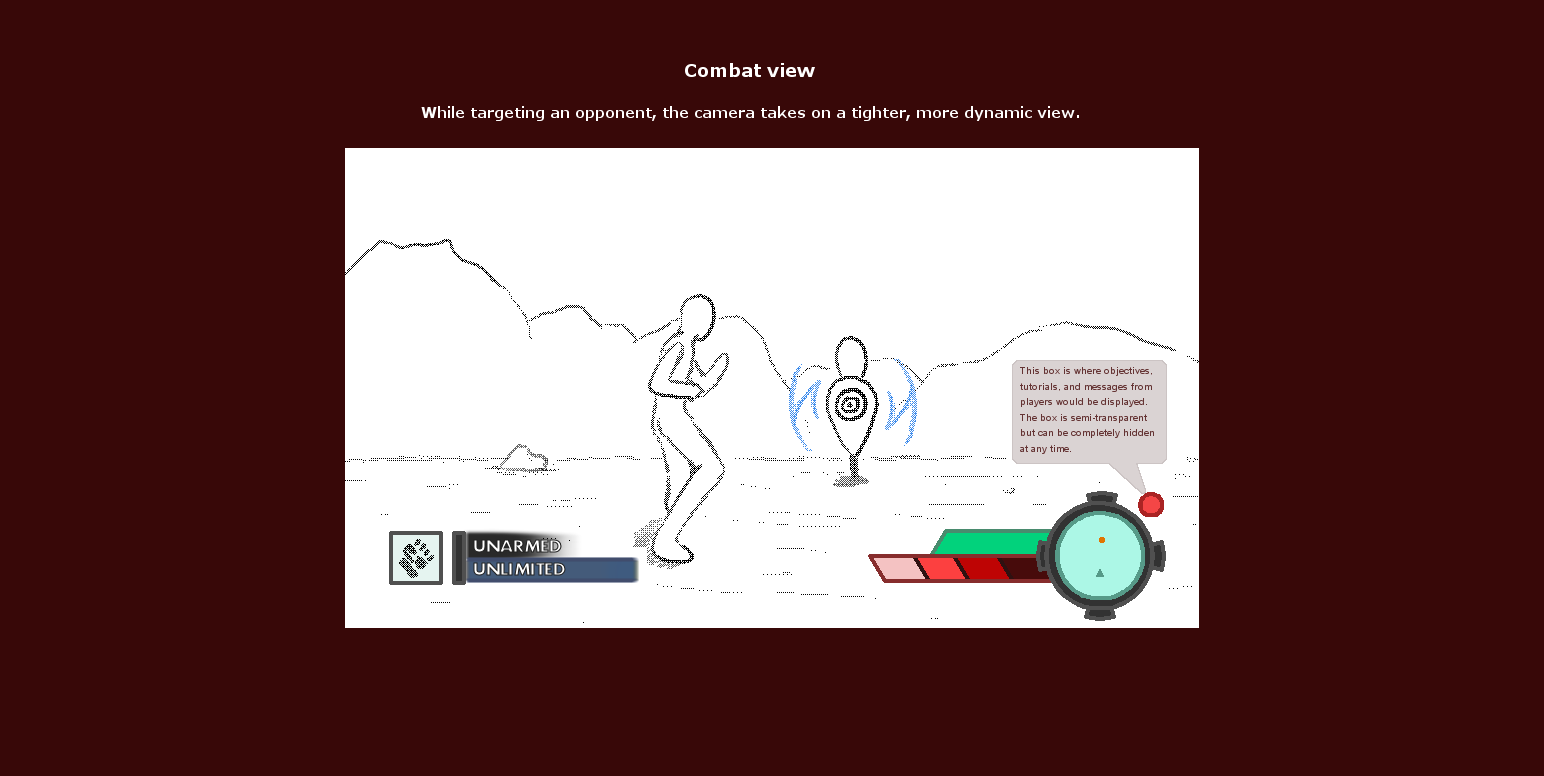 "Where will my money be going?"


Be sure to take a look at the current goal section on the left of the page to see what we're doing with the current amount of income. The plan is to save all income until we can invest it in whatever is the highest priority at the time that we can afford with the current funding.

In general, we'll be putting money towards:
Being able to establish a paid workforce (including myself) is very important because it means we can work full-time, actually enforce deadlines, and spread out the work to people who specialize in their field to accomplish more quality work in a shorter amount of time. Hopefully we can make a deal with a publisher who can help jump-start this process as well.


Now for a bit about us.


The team consist of a good handful of people, but these are the main contributors so far.

I'm a 22 year old Computer Science graduate with experience programming starting way back when I was 12. My creative story starts out with creating websites for fun, later J-Tag hacking my Xbox 360 and modding Halo 3, then advancing the Smash Bros Brawl and Wii modding scenes by developing new modding tools - and now programming this game and engine. I'm involved in every part of development as well: management, story writing, programming, modeling, texturing/art, music, animation, etc.

The achievement I'm most proud of so far has been developing the open-source modding tool entitled "BrawlBox" in C# - something I worked on just for fun since 2010. This tool can be utilized to create custom content for certain Wii games such as Smash Bros Brawl and Mario Kart Wii. To put it in perspective, this is the tool the Project M team utilized to put their artistic content into the game! It's so cool I could help make that happen.

But now I'm trying to make a living. I want to make fun, exciting and inspiring video games for the rest of my life and I need your help! A project like this isn't sustainable and can't succeed without fans and support, and even just a dollar contribution can really add up.

As for my career, well, I was never sure what I wanted to pursue. I don’t get to say I was that starry eyed kid who’s been working towards the goal of a creator after being exposed to a great Disney cartoon or anything. I just hopped right in, got hands-on experience with modding Brawl, and since then I’ve been working hard to increase my skill. It’s all I want to do. You can see more of my work here.

So now I work alongside David and his team with the hope to bring new worlds to life and to inspire.


DrPanda
------------------------------------------------------
Despite the screen name, he's not actually a doctor... probably not a panda either, how would he hold a pencil or stylus otherwise?
He's a self-taught artist that's working to improve and tries to be a creative input when not drawing. While not too confident in his abilities, he still wants others to enjoy what he creates. Good artwork can be expensive, so he hopes that what he does will be good enough for a people to take delight in, as well as earn maybe a few shoots and leaves.

...perhaps he is a panda after all?


Well, when you pledge any amount per month you immediately gain access to the patron-only feed where I'll be posting updates, questions, art and thoughts about the game, engine, and their development, and you will also have the option to include your real name, username, or company name in the credits of the final products - Thera, as well as any small proof-of-concept games we develop as tests.

Pledge $5 or more per month and you gain access to two more things - special roles and channels on our discord server. where you can talk with the dev team and other fellow patrons directly, and invitations to occasional livestreams where the team will broadcast development of the game and engine (a lot of development isn't so exciting to sit and watch, so we'll save these for the more visual and interesting parts). Unpledging or pledging less while in the server won't kick you from it, but will remove your patron status and thus revoke access to certain channels in the server.

The last tier, $10 or more per month, grants you two more things along with everything above - access to test builds of Thera and any smaller games we develop for playtesting, and access to the actual compiled engine! I will be pushing out engine updates every month after the payment cycle for everyone to test and utilize. However, I can't guarantee monthly releases will be stable. Stable releases that you should use for developing your own games will be released less often, depending on when they are ready.


Of course! Here's one of the characters we're preparing for debugging use and for the multiplayer demo, Carly. Keep in mind that the concepts are just ideas and the model for this character is just for testing and not a final version right now, so there's a lot of work that still needs to be done. This model does not represent the quality we're aiming for in the final release.


An early concept by cx-asuka 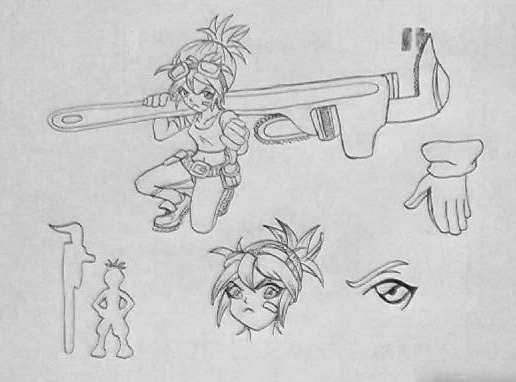 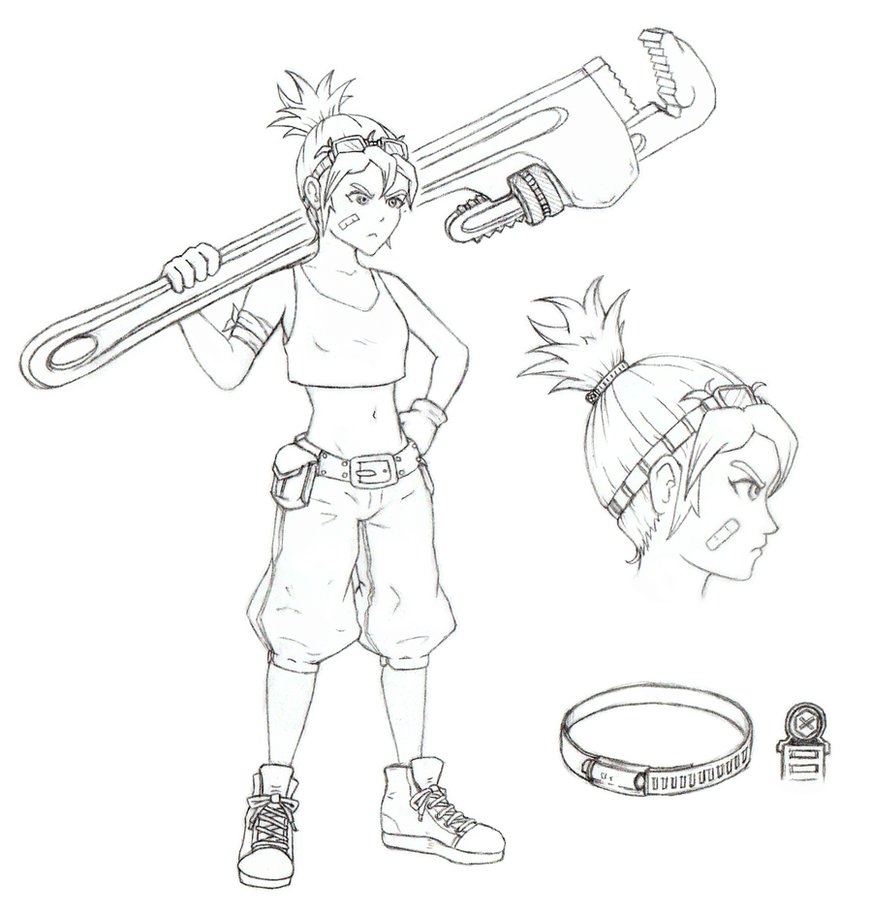 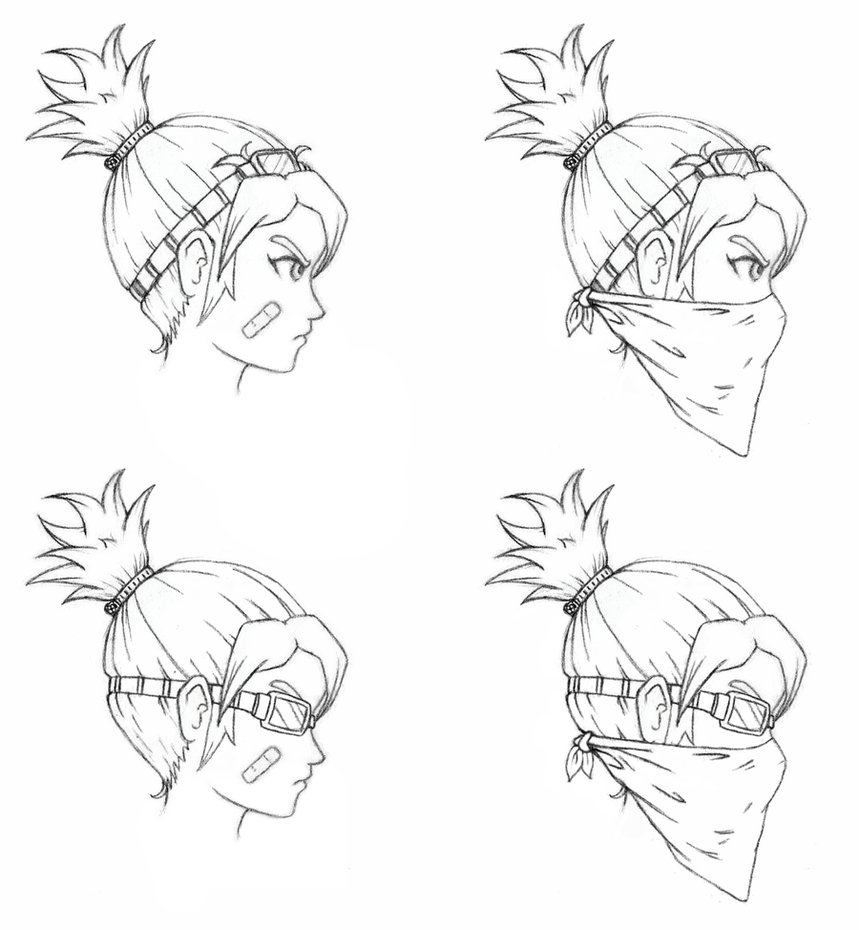 Test model made by Joseph and David 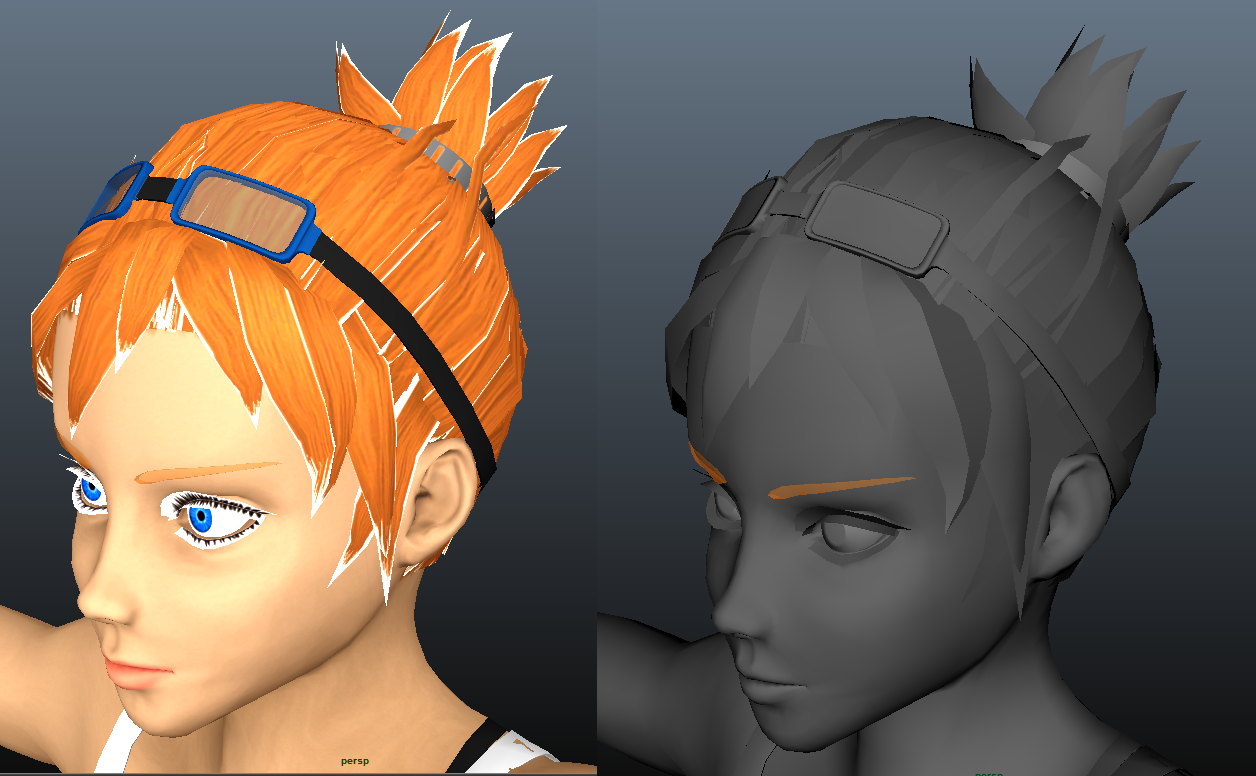 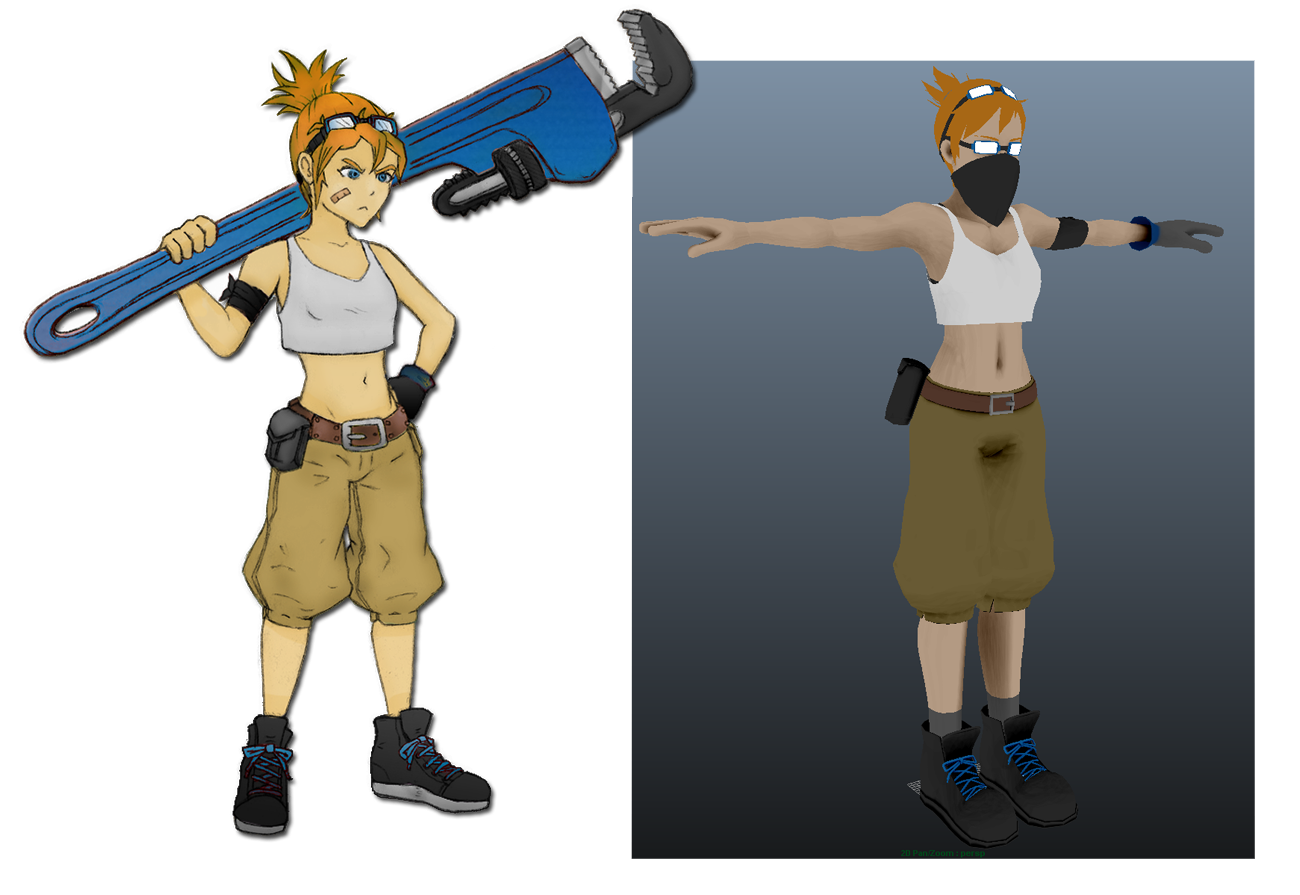 A closer look at the wrench, modeled by Joseph 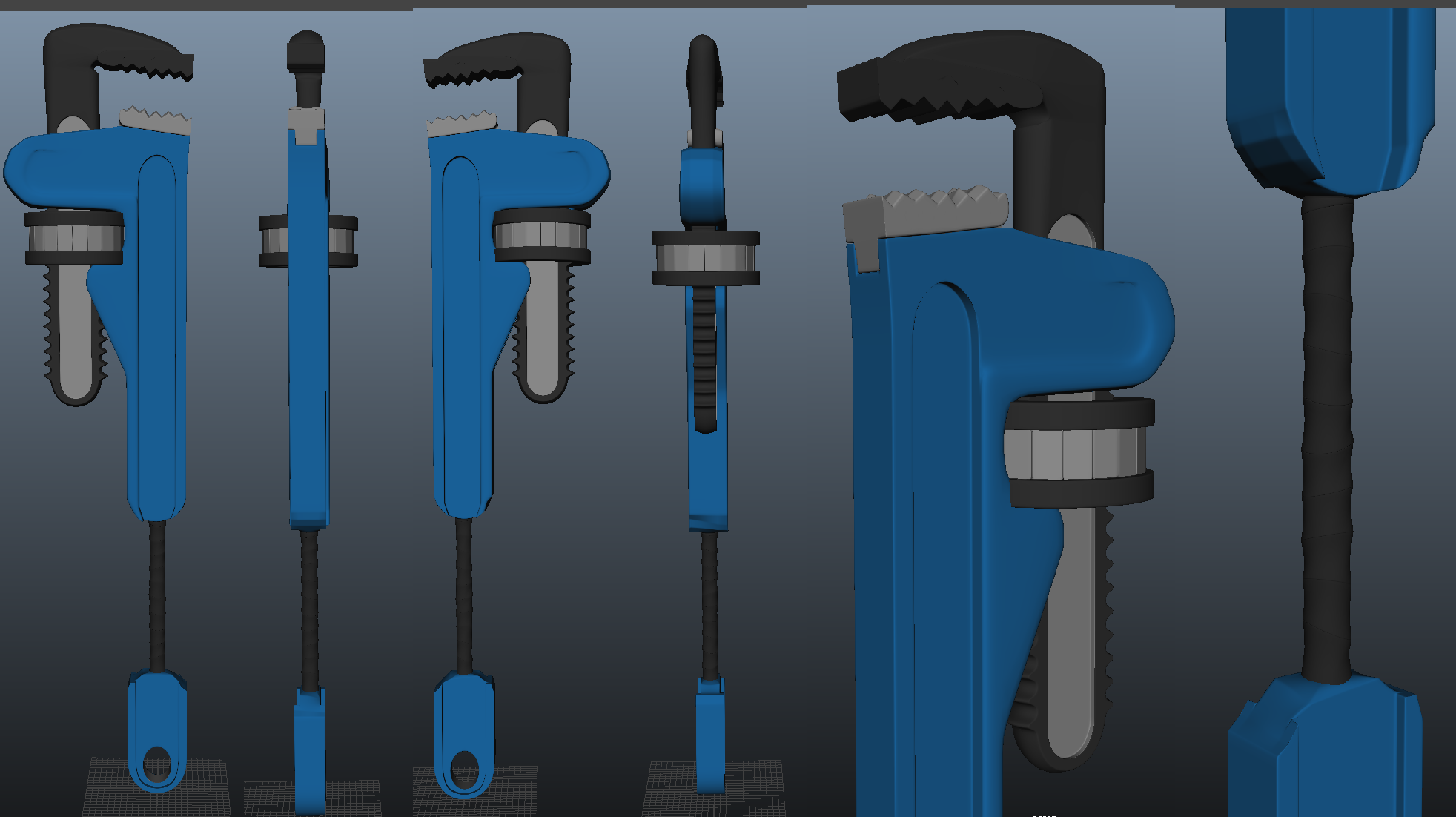 Low poly version of updated hair (left), side by side with high poly 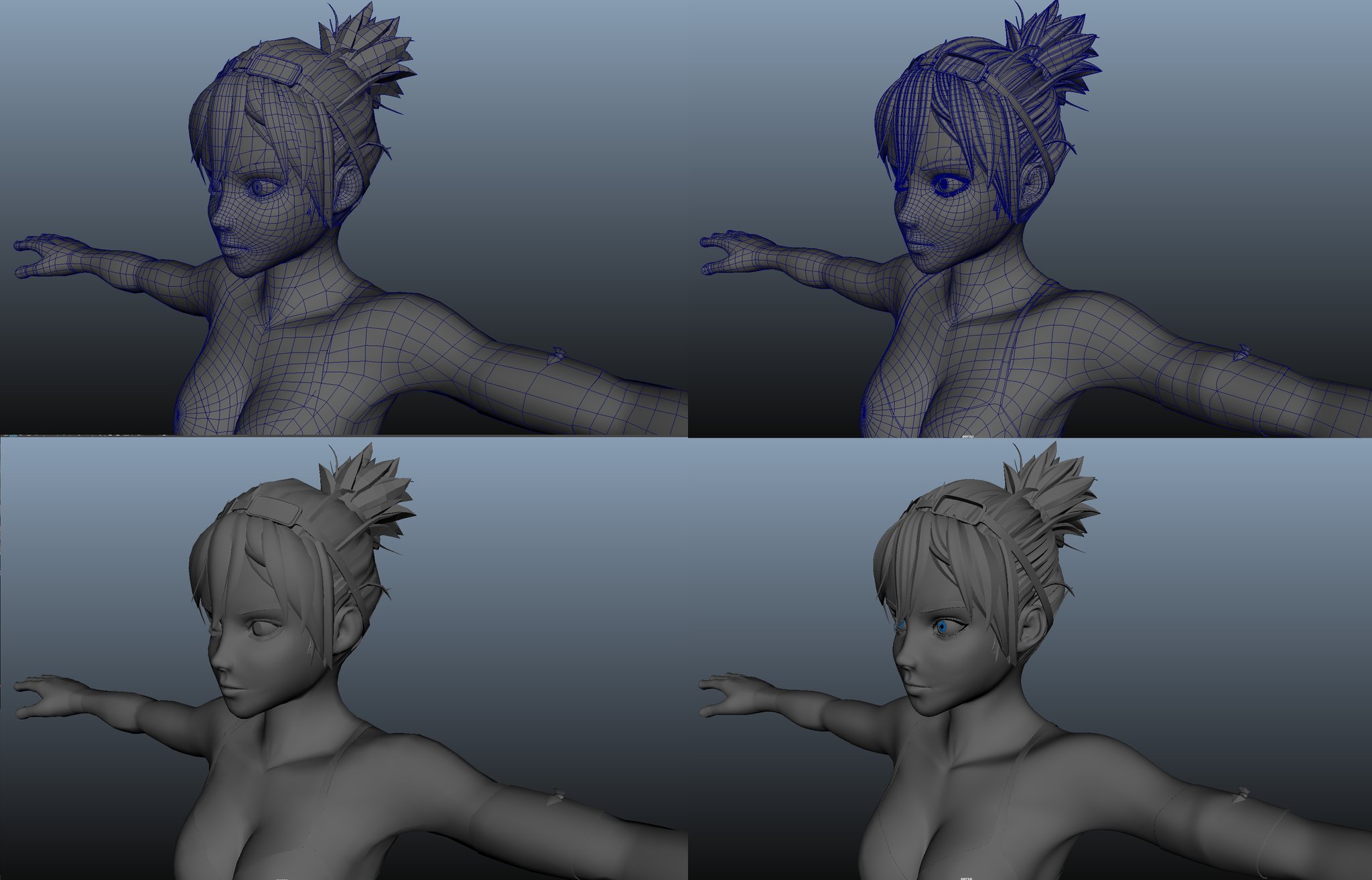 
I'd like to thank you for reading this far and for considering pledging to help make this happen. This is a huge passion project of mine and I work on it just about every day. We've put a lot of time and effort into our work so far and I believe that we can create a fun, compelling and exciting game for everyone to enjoy.

You can follow public updates on:
Feel free to tweet at me or send a direct message if you have any questions!

22% complete
This means the project is gaining traction! This is a big goal to hit from the start!! I'll be saving all income for future use up until this goal.
1 of 4