$1.50
per month
Join
• Early access to completed pages:
- You'll see each completed page at least a week before anyone else in the world!

• My eternal thanks!
- You'll get your name listed in the "Supporters" section of the Unsung Superheroes website, a shoutout on the Unsung Superheroes Facebook page and blog, and your name printed in any physical copies of comic that I print while you are a Patron (IF that should happen).
- (Please let me know if you'd rather your name didn't appear in any of these places.)

• Access to my Patreon-Only Feed:
- I'll be posting updates as I create each story, some of which will be reserved for people more invested in the project. These will be For Patrons' Eyes Only! This will include research notes and general musings on whatever I am working on.

• Access to a Patron-only Discord.
-I'm setting up a Discord account and will allow Patrons access to it to talk to me and each other about the project or anything else.
- (I'll be honest - I don't yet understand Discord so this may be a little while coming)
Includes Discord benefits

$3
per month
Join
Everything from previous tiers, plus:

• Early access to Behind-the-Scenes and Work-In-Progress material, including some Patron-Only materials that will not be seen elsewhere:
- These will include W.I.P. sketches and videos, character designs, mistakes, and scripts of the story.

• Exclusive Hi-Def versions of released materials.
- The version of each page I release elsewhere will be smaller and lower definition, partly to keep page-loading times quicker. This tier will give you access to the full-sized highest quality versions.
Includes Discord benefits

$10
per month
Join
Everything from previous tiers, plus:

• Your Face Here:
- I will include your face on a character in the novel. It won't be an historical figure for whom I have a visual reference of their actual appearance... but it could be anybody else and I'll discuss this with you before doing it.

Thanks for checking out my Patreon page! I've created it to support my graphic novel project, which you can find at www.unsungsuperheroes.com.
I hope you like what you see, and I'll be eternally grateful if you pledge to support this project!
I'd also be most grateful if you were to share this page around your social networks!

What Am I Creating?

Throughout history, there have been a great number of people, just regular people, who have overcome near-unsurpassable odds, shown insurmountable bravery, or mind-boggling skill to do something seemingly superhuman.

Not all of these people are well-known for their acts; for example, for every Oskar Schindler, there's a Lois Gunden (look her up!).

I'm creating a series of graphic novels to highlight these lesser-known true human stories of bravery, compassion, and humanity, and the lives of the people behind them, each one telling the story of a different Unsung Superhero.

Each story will be released online at first, but then I hope to get them published as physical copies, and to try to get them into places like school libraries so children and young adults may learn about these lesser-known historical figures in a fun and unforced way.

I'm researching each story in depth, and each will be based on the known facts of the events and the people involved (though taking some dramatic license where needed).

This is a collection of true historical tales of real, ordinary people, like you and I, who did remarkable things, and who maybe aren't as well known as they could be.
This is the "Unsung Superheroes" graphic novel series.
This is "US".

Who is the Current Story About?

The story I'm working on at the moment is the story of Robert Smalls. 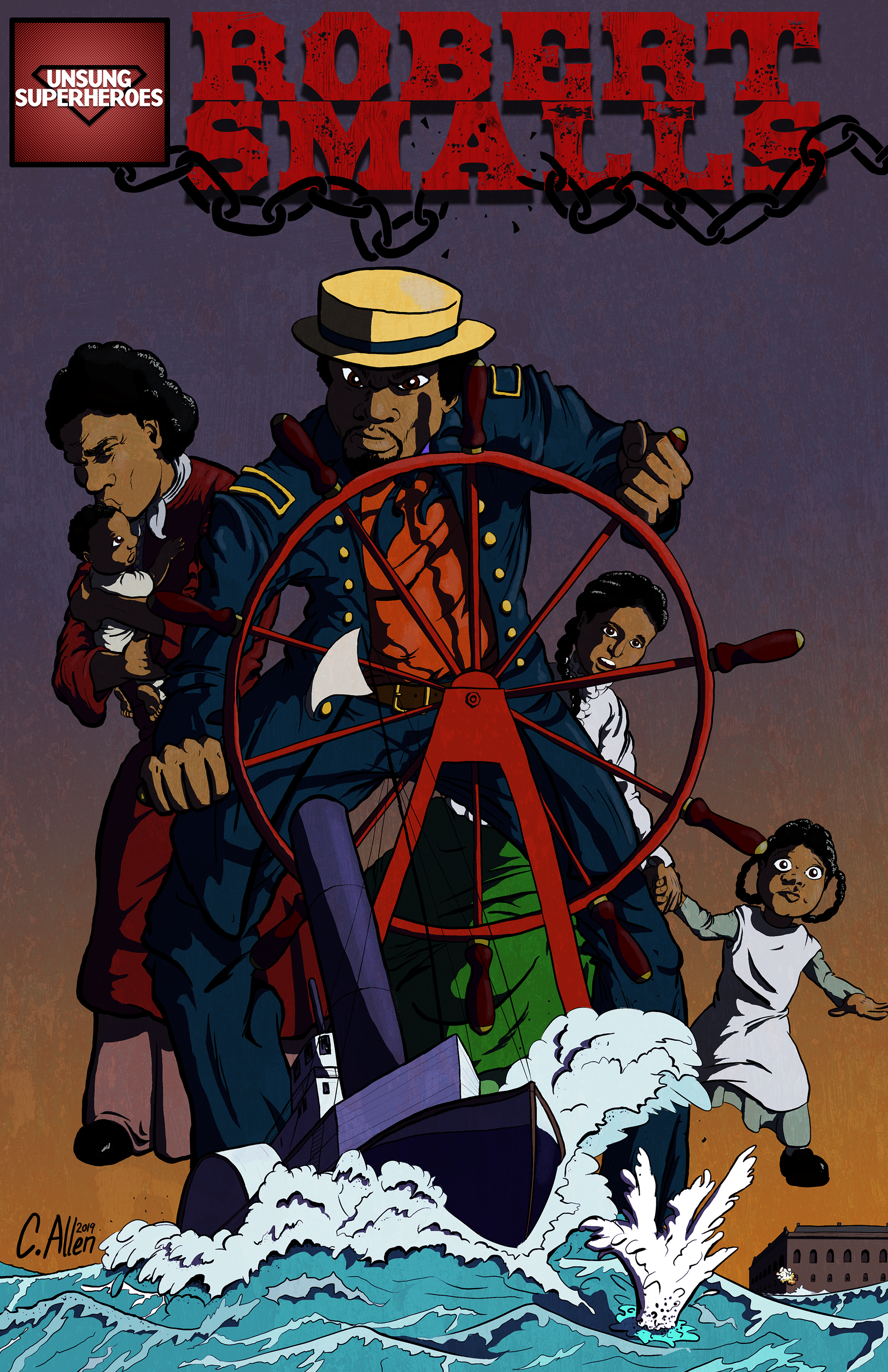 I'll be honest, I hadn't heard of him until the end of 2018 when I saw this picture pop up on Facebook: 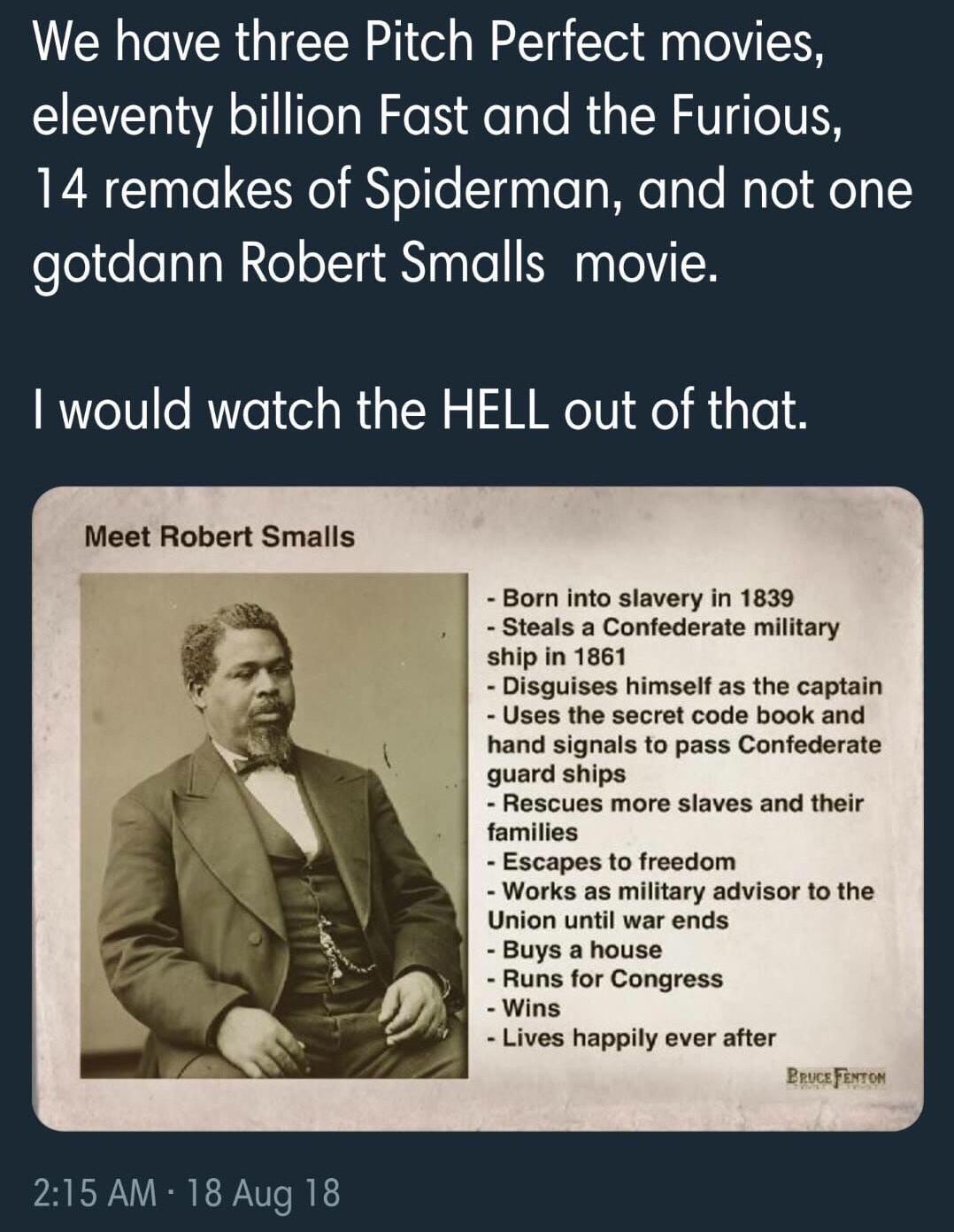 Well, I can't make a film, but I CAN make a graphic novel!

To be honest, that's all I'll say about him at this stage; firstly because if you stay tuned, you'll see the creation of a graphic novel that will tell you all about him!
Secondly; if that picture doesn't get you excited about him and this project, I'm not sure I can say anything more that will!

Below is the first page of the graphic novel so you can see what it looks like: 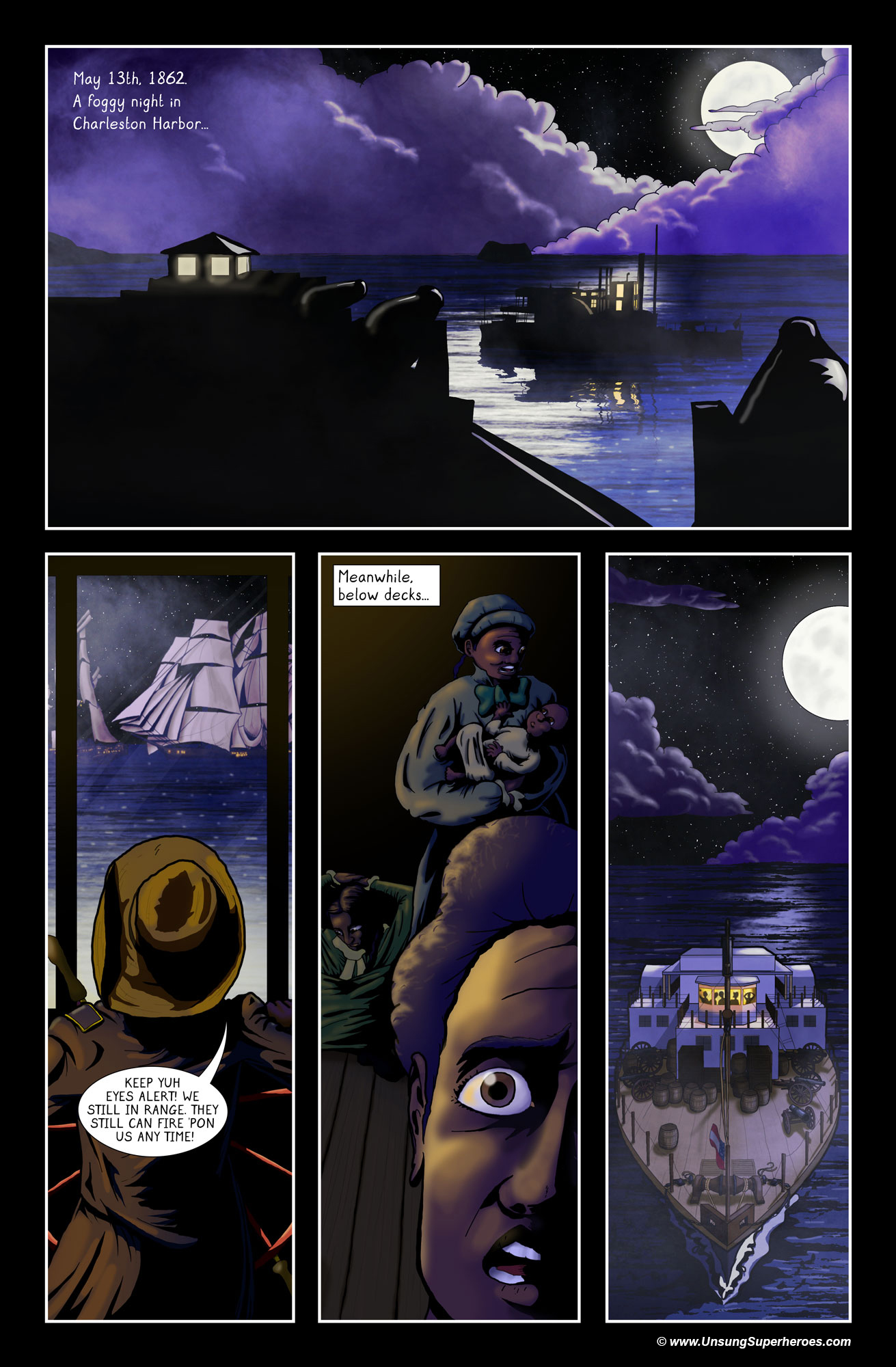 What Am I Asking You For?

I'll be upfront about this, and you probably guessed it already - it's money.

I am excited to be working on this graphic novel series, and at the time of writing this, am creating the first one. I've been working on it since November 2018.
There is a phenomenal amount of work involved in creating each story. Most of my free time (and a lot of time I should be sleeping), in between other jobs that I have taken on (and that Covid has mostly put a stop to) to keep myself housed and fed, is going into this project. There's also financial outlay, buying books, subscribing for access to historical archives, and the like.

What I'm asking you for, and where this site, Patreon, comes in is for you to become my Patron and pledge support for me to keep telling these wonderful stories.

Click on “Become a Patron” and you can choose an amount of money to pledge each month from the "Tiers" listed and depending on how much you pledge, you'll get access to all sorts of things such as...

What Will You Get?

The rewards currently include:
Plus: with some financial support behind the comic, I can dedicate more time to it rather than other jobs, and get the pages out and the story moving along quicker for you, and eventually settle down to a regular output schedule!

I will also be donating 10% of every pledge I collect to a charity relevant to the story I'm working on. (Unless you specifically request that I do not with your pledges. I understand that some people may have reservations about certain charities for any number of reasons)

The current and relevant charity that 10% of your pledges will be donated to for the duration of the Robert Smalls story is Anti-Slavery, who work to end slavery around the world.

I didn't introduce myself, did I? Please forgive me.
I'm Curtis, an illustrator raised and living in Birmingham, England. I've been drawing since I was old enough to hold a pencil and I've been working as an illustrator professionally for a few years now.

I also take commissions for artwork such as portraits, and also sell a few lines of my own greeting cards, prints, and other illustrated goods in my Etsy store .

That's about the size of it. Thank you for reading this far, and thanks in advance for any of you who do make a pledge of any tier: you have become a Patron of the Arts.
Many thanks to anyone who shares this page, too.

It really does all help me, and I like to think it helps bring about another voice to the comics world!

$13.55 - reached! per month
This would allow me to dedicate a little money to advertise the comic and the Patreon with each page release, thus spreading the word and hopefully allowing this all to gain a little more steam!
1 of 4