UsagiTripleSix is creating content you must be 18+ to view. Are you 18 years of age or older?

$5
per month
Join
Get project updates a little sooner than the public, in addition to the patron-only posts and updates!
Includes Discord benefits

$10
per month
Join
All of the above, plus the satisfaction of giving a total stranger on the internet ten bucks a month!
Includes Discord benefits

I've been doing this purely for my amusement, but thought it might be more fun to share some of my creations with other like-minded people.

I'm currently working on making a game called Interns of Ecstasy Island, which is a bit of a hybrid between a visual novel and one of those life simulator games that people seem to like making recently. You can read more about it on my Project Page for the game, as well as my blog. Discuss what I'm working on over on my Discord server.
Latest version is 0.291, available here. 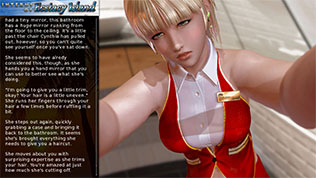 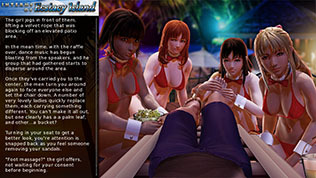 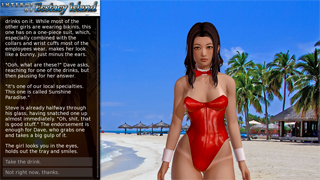 WHY SHOULD YOU GIVE ME MONEY?

Why in the world would you give your money to some unreliable stranger one who spends their time making slightly titillating amateur computer games for their own amusement? You've got far better things to do with your cash!

As with any artist with a weird creative hobby, doing what I do takes up a lot of my time and energy. I only have so much of either to give, and writing, coding and Photoshop are always competing with video games, YouTube and binge Netflix viewing for what I have available.

Community support (both financially, and in the form of audience engagement) can act as motivators to get me to choose to spend my time on my more work-like hobbies, rather than the ones that exist purely for relaxation's sake.

Again, like any other creator, I would greatly prefer that my demanding hobby take time away from the parts of my days relegated to Work rather than Play, but there's that whole pesky thing about needing money to live, and needing to work to earn money. Being able to make their odd creative outlet a part-time job thanks to the generous financial support of crazy millionaires on the Internet is the dream of any artist, and I'm no exception. It is a dream, though, much like winning the lottery. But I suppose it doesn't hurt to buy a lottery ticket every once in a while.


Anyway, like I said earlier, you shouldn't give me money. However, if you like what I'm doing, and want to toss a buck or two into my tip jar to keep me motivated, I will happily accept it. I mean, I did set up the account on Patreon, after all.

REWARDS FOR MY PATRONS

I'm working on fun art projects for my personal amusement, rather than creating products for sale, so it makes it a little difficult to find rewards to offer those who chose to be patrons of my art. I do have a couple of ideas, though. Since I'll want enough people interested to make it worth my time, I'll tie these into my goals. Here's what I've got in mind so far:

Behind the Scenes News!
While I frequently share some of my ideas about things I'm working on, I don't typically give out much about HOW I'm doing it. When this goal is reached, I can put together special updates to provide Patrons with screenshots and samples of scenes I'm working on, and give you more details about my future plans.

Earlier Access!
When unlocked, I can make a point of providing you fine people with updates to my projects in advance of the public releases. Just think of it! You can laugh at my bugs, typos and grammatical errors long before anyone else (and might even be the only ones to ever see them, since I'll correct the ones you point out). Plenty of amusement to be had!

Input!
No need for a special goal for this one. I tend to take everyone's suggestions into account. I also ignore some of them. It's a little harder to ignore people who are paying you, though. Just saying.

$944.55 of $1,500 per month
This is the potential turning point for me. At this level, I can actually consider jeopardizing a steady paying job and benefits by attempting to switch to part time. Scary for me, but exciting all the same. Very thankful for all the support everyone has given me!
6 of 10