is creating YT videos & truthful audacious writings, on the depth of life

$3
per month
Join
I use my Instagram to raise your awareness. Everything there is authetic content made of my videos, and words. I am keeping it real. I don't use Instagram for cosmetic posts of self gratification. 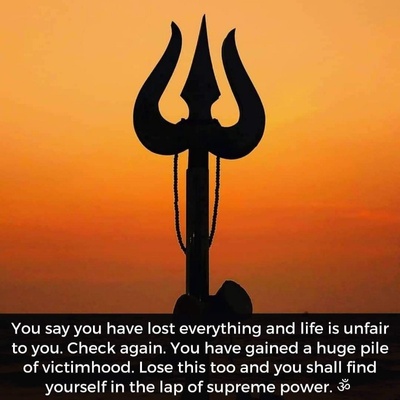 I WILL NARRATE THE NEW TO YOU.

I want to give an unbiased perspective on matters that concern you and hence, India whether you know about them or not, whether they come from the right or the left, man or a woman, whether they offend some or appease others. My intention is neither to offend nor to appease. My intention is to propound the truth. My intention is to create an India that focuses on evidence before believing. Andh-bhakti cannot be the norm anymore. Is Covid in 2021 not enough of a sign of the rigidity and irrational believes that are driving the mind of this country? Let us talk about the collective mind that is India. What should that be like? Should it be a rational mind or an irrational mind’s arrogance justified as bhakti, dharma, or mazhab, and at times of no arrogance, “apni apni shraddha hai”, what a tool for mental lethargy religion is becoming. I can speak about the relevance of bhakti yoga and idol worship, and how they relate to the nirakar god, if one chooses that as their path. And one day they have to reach the nirakar. The temple was then to be tIt is not that there is a problem in religion. The difference in mugging and understanding. That is the problem here.
In one of my publications, I am attempting to reveal a strange truth about justice to you which goes far beyond the title of the publication, False Rape Case Culture (FRCC), and, my video lectures around that publication. Be patient with it before jumping to any conclusions. It reveals to you some aspects of the kind of society we are becoming.

I assure you that my Medium publications Preseed Essays (PE) and FRCC will expand your mind if you are patient with them, and if you give them the kind of time I may have given to conduct that inquiry. <Chapters from the publication Preseed Essays start with a suffix ‘PE’ like ‘PE Chapter (Chapter no. _)>.
I have given many years of my life to that knowledge an iota of which my written or spoken words represent. Another iota is covered by the attachments I have placed in the flow of my writings or posts.
I have selflessly given those many years for two reasons -:
My words on the internet collectively, I feel may work as a great insight to my mind and may reflect well upon the kind of action I will take in favor of India if I ever have that level of clout, power and technology.

Also, it seems to many that I am purposely offending people with the truth on my Youtube videos, that they don't want to hear or know about. I am unable to stop myself from doing so 16 hours a day with my words.

In a profoundly sick society, revealing the truth may offend people indeed.

Sponsor me as if you are giving me a tuition fee if you think you are learning from me, something. Something unique.

Why is sponsorship of at least $1 per day from you important? I am putting in the effort worth that much money per day per person, at least. You will know that what I am attempting is worth atleast a value of one full meal of yours per day, if you value knowledge and altruism.

$4
per month
Join
I have 3 Facebook pages apart from my personal profile on FB.

All these 4 Fb sites are different because they all serve to cover different topics. But all 4 towards imparting more knowledge.

If you subscribe to them, you will get more all-rounded knowledge from me across topics as wide as science, entrepreneurship, philosophy, religion, spirituality and politics. I often post on them to collect my own personal thoughts.

I post plenty of political matters as well, yet I say my political views are moderate because I am merely a learner. Till I have learned I am not in a position to say whether I belong to the left or the right. It is for you to decipher through my words. Tell me if you figure it out.

The below mentioned Youtube playlist of about 100 plus videos by me contains existential, spiritual and political words I have for my family and friends in the times of Covid. You may or may not choose to open it. However if you do open it, you will reach a world of profound knowledge.

On my videos, among expressions of my own altruistic tech prototypes, I am looking to tackle problems of isms like:
1. fascism like divisive nationalism,
2. patriarchy and the radical side of feminism*, the divisive feminism, which is often also called feminazism,
3. divisive communalism/groupisms,
4. illogical communism,
5. and other isms like mindless consumerism that have the potential to divide the world further".
6. Demonstrations of my own tech products.
7. Our work in Mathematics.

Everything I am saying is the universal unabashed bare truth. However, If I had to pinpoint my mind to some dialect and culture, I chose my own. A culture of an Indian middle class that became an Indian lower middle class due to the limitations of its own mind. Nothing unusual. The lower middle class of India, its majority, is the way it is, due to reasons, potentially all in its own control. Its mind. For it to change its fate, it has to stop making excuses.

I don't expect to make any money for myself for many more years for my work is such. Not until you acknowledge my work enough to become my patron here. Of course, some money will significantly empower me further.

The below essay is for those who want to know who is the speaker in the above videos, in totality. I am starting it with an important question without beating around the bush.

What is Samadhi? Many have told you. But if you have still not understood, I am the new man you have, to understand samadhi from. I am available to give the world Samadhi as a tool — the brahmastra, in a pained world of 20(COVID).

Over the last few years I thought I will give you 10 names of 10 great people who are institutions in themselves. Dig them deep when I give you those names.
Fundamentally, what they must have designed their life towards, after their own understanding of consciousness to a great degree of corrected-ness, is, what my life has been designed for too. What is that? To the best among you, the knowledge of the realm of God. Shunyta.
While also knowing, that in Shunyta, your material form can still be in action, including that mind. Yet you can be seated in Shunyta. It can happen only when you truly know that the waves that make you do things or feel things are outside your body they are in mind. These waves make you feel life or have concious experience, fpr. the impressions of it is felt n the underlying layer, paramatma. You are that paramatma interfacing with your body/matter.

From the land of knowledge to the land of gimmicks. That is the India of today. How did we become this?
Sleep or swim, what is more likely to get chosen?
We chose sleep even in the times we needed to learn to swim. Now, as a result, we are drowning, while we pray without really even understanding what is prayerfulness. Prayerfulness happens in stillness. Stillness happens to the purest. The substance you consume from sound.

Just know that your mind has been hijacked by vibrating matter. Freedom will be found as a result. The only way to know this is to experience the same vibrations from a distance, where you are planted in the realm of ether.

Max Planck, just like I, and many others, have found Consciousness as fundamental. The matter is derived from consciousness. Nothing new. Infact ancient, highly scientific and mentioned from 1000s of years in our Upnishads. Nevermind. Upanishads or nothing have sole rights to this knowledge. Its on the other end of time spent in total stillness of the mind, Samadhi. There is no other way. I endeavour to tell you about your destination, the moments in Samadhi.
What is consciousness? Non-matter.
What is non-matter? Emptiness.
What is emptiness? Vaccum.
What is Vaccum? God.
Are space, ether, and god the same? Yes.
So, is space conscious? Yes.
It becomes a wave at the end of the wave is matter of it, and then that matter becomes non existent. That matter is memory. We are impressions of these memories and waves that create these memories
I am announcing, without an iota of doubt, that all that is empty totally is parmatma.

8 suggestions towards location where you will find my content :
I don't think so - Facebook is dead, the world just doesn't know it.

The 8 suggestions above, are extremely important. For, if you follow that order in your effort to understand me, you will know the context. In any scripture, without context, there is no meaning.
I have purposely not listed the links here except the Preseed Website, for :


I have always and will always speak the truth, however lofty it may seem to you. But first listen to this video titled 'Is atheism a sin' by Mr. Jay Lakhani, a gem, to understand why I would like to teach an athiest more than an andh bhakt -

A message for, Hindu andh-bhakts. I have no message for radical Islamists or Islam andh bhakts, however, for,
1. I have not followed their rituals as I have followed rituals practiced at my own home.
2. The whole world is already sending content to teach them lessons about human brotherhood while they are still chasing Muslim brotherhood.

I have been saying for many years, that the current narratives of religion will end and must end.

I also have a message for some of my senior relatives - please don't promote religion and idol worship culture among children, blindly, over and above the culture of silencing of the mind. Don't make their efforts to become one with God, as blind as yours.

I pledge to speak the truth in all conditions. It puts me in temporary trouble for my truth is lofty, but extremely objective.

What am I after?
I want to make India a culture of evidence-based thinking. Even in its blind religious rituals which cause pollution and 'god' statues thrown as garbage for months after Diwali under beautiful trees like peepal and bargad (Banyan). How does one get the evidence of god? In Samadhi. There is no other way.

Swami Vivekananda: "To believe blindly is to degenerate the human soul. Be an atheist if you want, but do not believe in anything unquestioningly".

I say, "and if you questioned, tell me the answer and your question, both".

Why do we just take up religions and narratives that the same flawed parents of ours follow, without questioning? It's baffling how deep-rooted mental lethargy is. We are not rocks, ladies and gentlemen. We are the most fluid of it all, ether. But most of us are all mostly looking outward, to earth, air, water and fire - thus becoming only that, hardly ethereal.