is creating Stories and Music 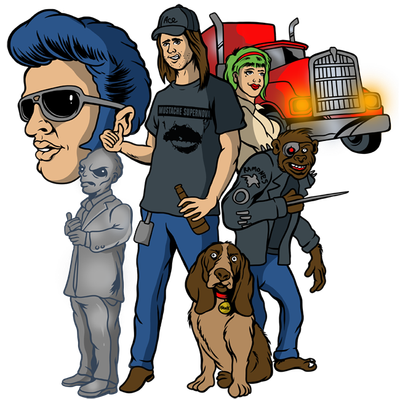 $1
per month
Join
Let's keep it simple, shall we? There is only ONE PLEDGE TIER. $1. That's right, Johnny. One BUCK!
Of course, you can make a custom pledge if you want. But you don't have to!

By merely joining at this $1.00 level you will receive mega benefits like:

PLUS, you get a digital copy of the Ace Tucker Space Trucker NOVEL and the first two novellas IMMEDIATELY! Awwwww yeah!

For fans of GUARDIANS OF THE GALAXY, BILL AND TED’S EXCELLENT ADVENTURE, RICK AND MORTY, and FUTURAMA.

Ace Tucker is a man who was raised in outer space and taught how to be human by a Russian cyborg chimpanzee. He earns a living as a rock-and-roll roadie and cargo hauler for the greatest band in the galaxy, Mustache Supernova. His world is turned upside down the night he meets Elvis Presley, the very not-dead King of Rock ‘n’ Roll. After Ace saves Elvis from an alien assassin he must travel to Memphis, Tennessee to restore Presley’s health. But things are not what they seem at Elvis’s pastoral home, Graceland. There, Ace makes a discovery that has the power to shape the future (and potentially undo the past)

What the  Fans are Saying...


When I first heard the free podcast, I was blown away. Then I read the novel and now I'm a hooked. This guy knows what we've always known. The King is alive and well and out there to save the galaxy.

Most underrated sci-fi rock comedy of all time I love Ace Tucker. It is so funny, the music is awesome, what could be better. The story gets better and better. Can't wait for more!

Yes please! I need more of this. The production value is top notch(which is rare among podcasts), the story is fun and intriguing, and the voice actor is great. Can’t wait to hear more.

This is the greatest podcast of all time! Excellent Rock'n'Roll theme song, hilarious dialogue, Elvis Presley, and a Russian cyborg chimp that loves Elvis Presley! Literally, everything I want in a podcast!

What a terrific story! I grabbed it on sale, fully expecting it to be a joke and guessing I would read a few pages and delete it. Boy was I wrong! Although the synopsis makes it sound ridiculous, the story actually works. Thoroughly enjoyed it and am recommending it to my Sci-Fi friends who have a sense of humor. Don't want to post any spoilers, but yes Elvis is alive in this story and the main characters include him, a brilliant Russian Cyborg Space Chimp and a foul-mouthed talking Basset Hound. My favorite bit though, is a nod to my favorite sandwich shop - Jimmy John's! Read it and you will see what I mean.

A good story, full of surprises, with unlikely, different and unexpected characters. Enjoyable to read and totally entertaining, I recommend reading this book.

James R. Tramontana*James R. Tramontana holds a Master of Arts in Mass Media Communication and a Bachelor of Arts in Creative Writing from the University of Central Florida. He is the sole creator of Ace Tucker Space Trucker, a cinematic audio science fiction series. In addition to writing, editing, and sound designing the show, James voices all of the characters. The novelization of Ace Tucker Space Trucker: Season One, released in February of 2018, achieved top ranks in Amazon.com’s Humorous Science Fiction chart.Tramontana is also a multi-instrumentalist and has performed throughout the United States in bands such as Spitvalves, Alias Clark, Red Hot Rebellion, CR8RFACE, Prime Floridian, and Ensign Jimmy’s Landing Party. His media publishing company, Solid Arts and Science LLC, has released over 100 songs (many of which featured in films, television, and video games), as well as dozens of comic books and novels.He enjoys peanut butter, long naps on the beach, loud music, and unusual socks.
</section>