Akane Hayashi is creating content you must be 18+ to view. Are you 18 years of age or older?

is creating BL games and illustration

$1
per month
Join
Thank you very much for your support! In this tier you'll gain access to:
Includes Discord benefits
Insider

$3
per month
Join
Thank you very much for your support! This tier includes:
Includes Discord benefits
Stories Lover

$8
per month
Join
Thank you very much for your support! In this tier you'll gain access to:
Includes Discord benefits

Please notice that my Patreon page is set to "upfront charge", which means that you'll be charged for your tier in the day you become a Patron and in the 1st of every month. 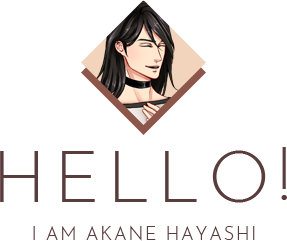 A 23 y.o. hobbyist artist and, just recently, visual novel developer. I'm a lover of the manga style and my works usually follow this aesthetic, especially when it comes to drawing bishounen/ikemen.

Birthday Cake [Demo] - As his best friend's (and secret crush) birthday is just around the corner, Laurent sees the perfect opportunity to give him something special: a cake with his favorite flavor. His plans are to give it to him after they come back from the commemoration, but will things turn out just as he planned?

Way To A Vampire's Heart [Demo] - Being one of the youngest Vampire Hunters, Lucian Lockhart didn't expect to encounter one of those bloodthirsty creatures in his lifetime. After all, vampires were on the brink of extinction and no one heard about a single apparition of them for more than fifteen years.
However, the opportunity unexpectedly appears and Lucian finds himself face to face with the enemy he had only known from told stories and books. As if fighting a vampire for the first time wasn't astounding enough, Lucian also discovers one thing about his family's past that could tear apart everything he had believed to be true.

Patreon serves as a way for you to support my work financially if you wish to. Despite being a hobbyist, I would love to be able to afford new features for my visual novels, such as animations, OST and even voice acting! It would be a dream coming true! *-*

When becoming a Patron, you'll play a very important role in supporting my side hustle and bringing new BL visual novels to reality. All Patrons are mentioned in my visual novel credits as a way to express my gratitude to them!

You can choose from any of the tiers available according to the rewards you'd like to receive. If you wish to support me with a one-time payment, you can do it through Ko-Fi.