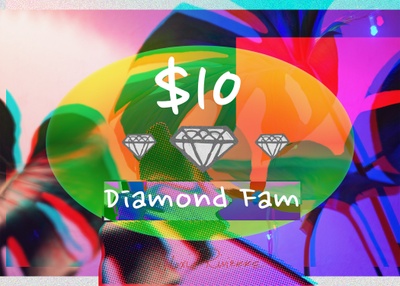 $10
per month
Join
Monthly Postcard- Each month I will mail you a 5x7 postcard featuring one of my original works of art. The postcard will be mailed to you in an envelop so that you can elect to use it personally or keep, or frame it!

Thank you for joining your support helps me to live and sustain a creative life and practice!

My content consists of studio work in progress featuring my art projects and art workshops that teach art skills in an approachable way!

Artist Bio: Alexis Rivierre is an interdisciplinary artist who constructs visual narratives that investigate memory, identity, representation and the social ramifications of race in the United States. Rivierre earned her MFA in Studio art with an emphasis in painting at Wichita State University in 2018, a Graduate Certificate in Marketing from Liberty University in 2015 and a BFA in Art/Painting, with a minor in Art History from Missouri State University in 2014.

Artist Statement: Images constructed in film and the broader media possess a social and political power that is used to construct the collective identities of how we perceive ourselves in relationship to those positioned as "the other”. Through an interdisciplinary, fractured, process I create visual narratives that investigate the ways in which the representation of race through language and visual media plays a role in how we are socialized in the United States. My work casts a critical lens on the performative nature of Black womanhood as it relates to our historical placement specifically within the American tale. Rooted in personal narrative I look to representations in film and media to derive sources of inquiry around stereotypes (ie. Jezebel, Angry Black Woman, etc.), the black body as a perceived threat, and managing self-care/ anxiety, to name a few concepts. Utilizing my clothing and personal objects I create masks that are embellished with materials like broken mirror, glass, beads, paint, embroidery, nails, etc. and then engage with an unassuming public through impromptu performative gestures. These characters/ personae are documented in self-portraiture, iPhone selfies, and video and are then paired with cultivated language and appropriated imagery from internet sourced media to create counter-narratives that reconstruct the collective identity while furthering critical discourse, cultivating power and purpose through the reimagined/reclaimed.