$2
per month
Join
or pay annually
Receive all e-pub or PDF issues of "ArabLit Quarterly," including back issues! 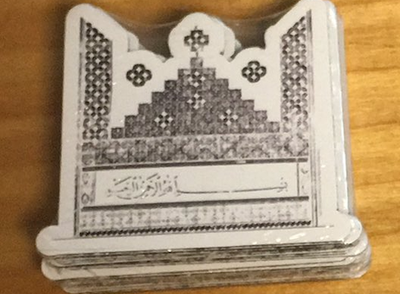 $5
per month
Join
or pay annually
Access to all e-pub and PDF issues of ArabLit Quarterly.

Debaaja magnet (shipped to US addresses).

$10
per month
Join
or pay annually
A gift subscription to the e-edition of ArabLit Quarterly and print editions (mailed to recipients inside the US, Europe, and Canada)*.

Please tell us your gift-ee's email so we can send a note about the gift subscription on the date of your choice!

Gift-ees will also get an e-book version of the forthcoming SAMIRA AZZAM collection (tr. Ranya Abdelrahman, introduced by Adania Shibli, with a foreword by Joseph Farag).

*For mailings outside the US, Europe, and Canada please contact separately, [email protected]

ArabLit (arablit), or Arabic Literature (in Translation), was founded by M Lynx Qualey in 2009, and has developed into a source of daily news and views on Arab and Arabic literature and translation. It has been used in classrooms, publishing houses, translators' & readers' homes, and elsewhere around the world.

In 2017, the site won the Literary Translation Initiative Award at the London Book Fair.

Thanks to YOUR help, ArabLit:

*Launched the ArabLit Story Prize on March 15. The prize, which went to Muhammad Abdelnabi's "Our Story," tr. Robin Moger" in its first year, has now run for three years, highlighting the work of emerging and established translators.

*Launched the ArabLit Quarterly in 2018. All Patreon subscribers receive access to e-copies of all issues.

*Will be launching the first ALQ Books release, a collection of short stories by Samira Azzam translated by Ranya Abdelrahman, forthcoming in Fall 2021. If we reach 250 Patreon subscribers, we will also produce a companion edited Arabic edition.

If you aren't comfortable with Patreon, there are other ways to help.

250 - reached! patrons
If we reach 250 patrons, we will produce an Arabic edition of the Samira Azzam short-story collection, forthcoming in English translation Fall 2021.

Thanks to the first 200 supporters, who made this translation possible!