is creating arts and education for the endangered Dena'ina language 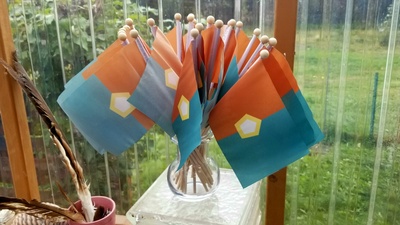 $11.11
per month
Join
This level of support is named for the two main colors of the Niqnalchint Tribe and Territories flag that I have designed to promote my tribe's cultural awareness and institutions, and patrons will receive a mini version of the flag itself!

$22.22
per month
Join
You will be adopting one of the 44 letters in the lower case version of the Dena'ina alphabet! You can select which letter you want to sponsor (first come first served of course) I will send a direct message for that information.

This tier also includes a mini Niqnalchint Tribe and Territories flag that I have designed to promote my tribe's cultural awareness and institutions.

You'll also be granted access to my Digital Vernissage, which are posts that offer previews of projects and art that haven't yet been displayed in public. This will be posted here and only be available for Adopt a Letter and Adopt a Lower-Case Letter patrons.

$44.44
per month
Join
You will be adopting one of the 44 letters in the Dena'ina alphabet! You can select which letter you want to sponsor (first come first served of course) I will send a direct message for that information.

This tier also includes a mini Niqnalchint Tribe and Territories flag that I have designed to promote my tribe's cultural awareness and institutions.

You'll also be granted access to my Digital Vernissage, which are posts that offer previews of projects and art that haven't yet been displayed in public. This will be posted here and only be available for Adopt a Letter and Adopt a Lower-Case Letter patrons.
Exclusive Mug
Fulfilled by Patreon
Jeweled Dena'ina Alphabet Blocks mug
Global shipping included

Who I Am
My name is Argent and I am a Silver Hand indigenous Alaskan artist, living and working here in my homeland on the southern side of Alaska's Kenai Peninsula. For me, artistic expression is the ultimate exercise in cultural self-determination and it is the diverse influences of my creolized background that make up the foundation of my artistic visions. One major driving factor in my artwork is based on the roots of the endangered and moribund Dena'ina language of my tribe and mixed culture group here in south central Alaska, Alaska's most urbanized region. I am part of the Ninilchik Tribe, one of 8 existing existing tribes and cultures in the Dena'ina speaking region that stretches from the southern slopes of Denali to the Pacific Ocean corridor of the Cook Inlet, cradled between volcanoes, glaciers, fjords, and three mountain ranges.

The Language
The Dena'ina language is nearly extinct with at least one dialect having no living speakers. This is due to not only the influence of Russian and later American expansion, but also because of the geography of Dena'ina lands where it has seen many transformations from neighboring cultures including Alutiiq, Ahtna, and Yup'ik, Dena'ina is part of the Na-Dene branch of indigenous American languages, and the Dena'ina culture is the only Na-Dene culture to have developed along an oceanic coast. Although there are no native speakers of the Outer Inlet or Kachemak variants of Dena'ina in the Ninilchik tribe today, the tribe still preserves its linguistic roots through its name and symbolic titles. 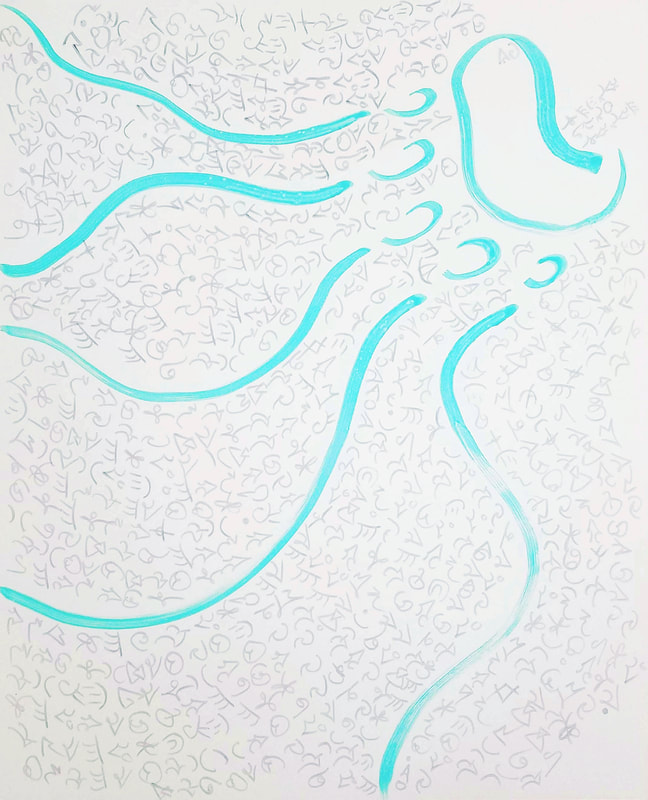 Project Origins
I grew up wondering why people in my family and larger cultural group didn't seem to be familiar with, or too interested in, the Dena'ina language despite ongoing efforts promoting language preservation through academic venues and writing. I had always been interested in languages as well as the arts and studied linguistics at a university level and it always bothered me that most indigenous languages (including Dena'ina) were written with the Latin or International Phonetic Alphabet. As a native speaker of English learning to overcome my bias to the sounds I am used to hearing in American English is extremely challenging, despite my years of experience learning and speaking several foreign languages efficiently. Additionally, an endangered moribund language near the end of its life is impossible to learn effectively because there are no social or real life contexts to practice and engage with. I realized that maybe the best way to honor an indigenous language is to share its elements, history, and cultural knowledge through visual and interactive arts. I decided I wanted to preserve the spirit of the language, and there is no way to more effectively, and beautifully, preserve a language's spirit than through a written tradition.

Qena Sint'isis
In early 2015 I began work on creating a writing system that would not only encode the phonetic elements of Dena'ina, but also use written symbols that feature symbols of Dena'ina culture. For example: the interjecting beat of a glottal stop between syllables (the apostrophe in the word Dena'ina) is represented by the letter 'Del', which is written with a symbol in the shape of a spruce root drumstick, called 'deleghi' in Dena'ina. This resulted in a set of 44 letters for all consonant and vowels, including those that have been borrowed into the language from neighboring indigenous cultures and from modern languages. This alphabet and the art exhibits and seminars that have evolved from it share the language in a new, visual manner, accompanied with interpretive guides. I named this project Qena Sint'isis, or Word Synthesis in English. 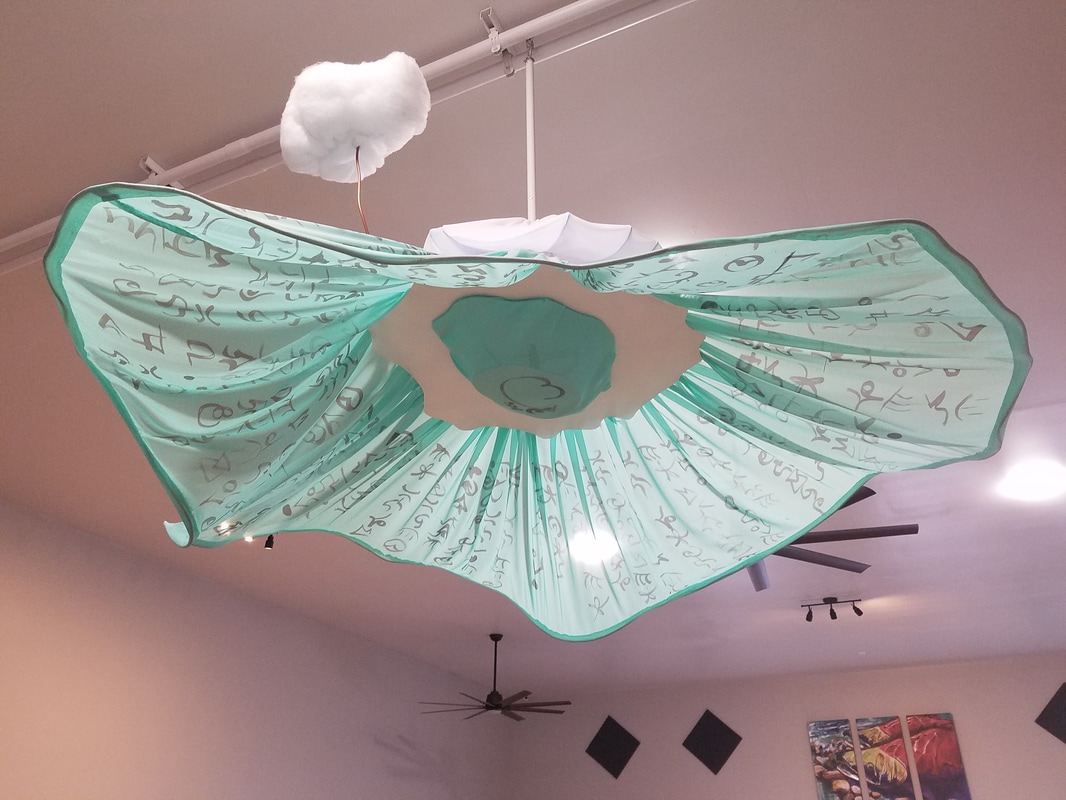 Development
Since 2016 I have had two solo exhibits dedicated to this project and have given several talks and presentations on my art and culture. I have also had art workshops for both children and adults using the alphabet and the ideas from using writing as art. There are also now two Qena Sint'isis pieces in the collection of the Pratt Museum in Homer, Alaska as well as permanent installations at the Homer Public Library and the Ninilchik Tribal Hall. This project has been supported by my tribe as well as the Alaska State Council on the Arts and the indigenous non-profit CIRI Foundation. In 2017 I created a corresponding lower case alphabet for the project which I decided to do as an exercise in "abstracting the abstractions" in a meta sense.

Goals
As a culture bearer it is my duty to not just preserve knowledge and raw data from the Dena'ina language, but to also engage it and allow it to grow and evolve by sharing it with others. It is my strong belief that on top of serving my tribe, culture, and family, I use this writing system for the benefit of people of every culture who now reside in the cultural lands. In fact some of the symbols found in the alphabet are based on the idea of cultural fusion and the future of our people. Project goals I have for further development include: 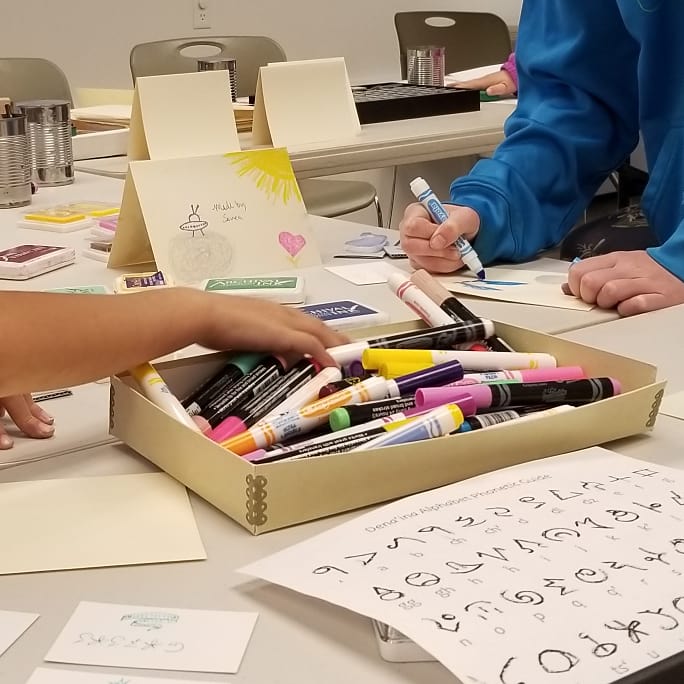 And You!
I am honored to have had the opportunities and support from every person and organization who have helped foster this project from its quiet beginnings in my sketchbooks from 2015 to it being a part of classroom lessons and gatherings today. As my way of honoring your patronage I am calling my first tier of support "Sponsor A Letter", and offering the first 44 people to symbolically adopt a letter of the created Dena'ina alphabet. As time goes on I will be adding project-specific tiers and incentives as they occur.

For more information on myself and more of my art please visit my official website argentkvasnikoff.com for my full portfolios, artist statements, and essays. I post updates there as they happen but more frequently I am active on Instagram @argentkvasnikoff

There is no way for me to express my gratitude enough for your time in reading about this project even if you do not choose to become a patron. You have become one more person who has knowledge of my culture that is forever changed, for good and bad, by a fast-changing world.