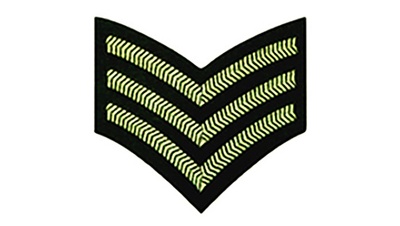 $2.50
per month
Join
Thank you for joining our community! For the price of a cup of coffee a month, you're helping me to continue producing creative content for wargamers and your contribution is very much appreciated.

Of course, you'll get a personal thank you from me if we ever meet in person!

For patrons at this non-commissioned rank, here is a list of the benefits you can expect. The mix is constantly changing according to the specific projects I have on the go at any one time, the requests from patrons and the guests I manage to bring onto the Battlechat podcasts. I also produce YouTube videos on a range of subjects and for different experience levels of wargamers. 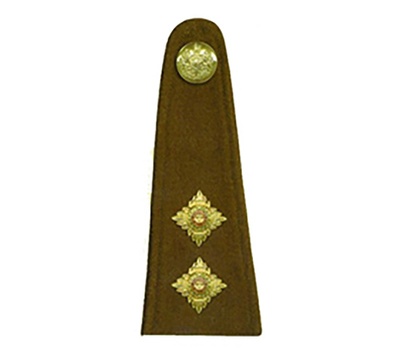 $5
per month
Join
Thank you for joining our community! For the price of a couple of cups of coffee a month, you're helping me to continue producing creative content for wargamers and your contribution is very much appreciated. Of course, a personal thank you from me if we ever meet in person!

For patrons at this commissioned rank, here is a list of the benefits you can expect. The mix is constantly changing according to the specific projects I have on the go at any one time, the requests from patrons and the guests I manage to bring onto the Battlechat podcasts. I also produce YouTube videos on a range of subjects and for different experience levels of wargamers. 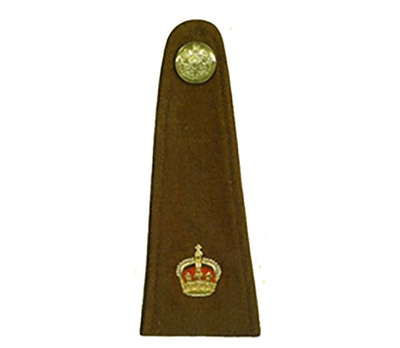 $10
per month
Join
Thank you for joining our community! For the price of a cup of coffee and a sandwich a month, you're helping me to continue producing creative content for wargamers and your contribution is very much appreciated. Of course, you'll get a personal thank you from me if we ever meet in person!

Of course, you'll get a personal thank you from me if we ever meet in person!

For patrons at the Major rank, here is a list of the benefits you can expect. The mix is constantly changing according to the specific projects I have on the go at any one time, the requests from patrons and the guests I manage to bring onto the Battlechat podcasts. I also produce YouTube videos on a range of subjects and for different experience levels of wargamers. 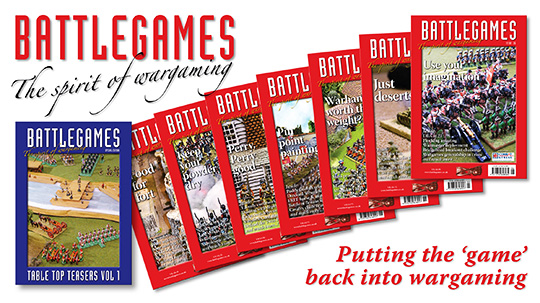 I'm Henry Hyde. I created the Battlegames website on 18th June 1998, and then self-published the bi-monthly Battlegames magazine from 2006-2011, which you can still buy in PDF format from my Gladius Payhip site and, if you're lucky, in paper format from a few retailers who still have copies, or eBay (though they are rare). 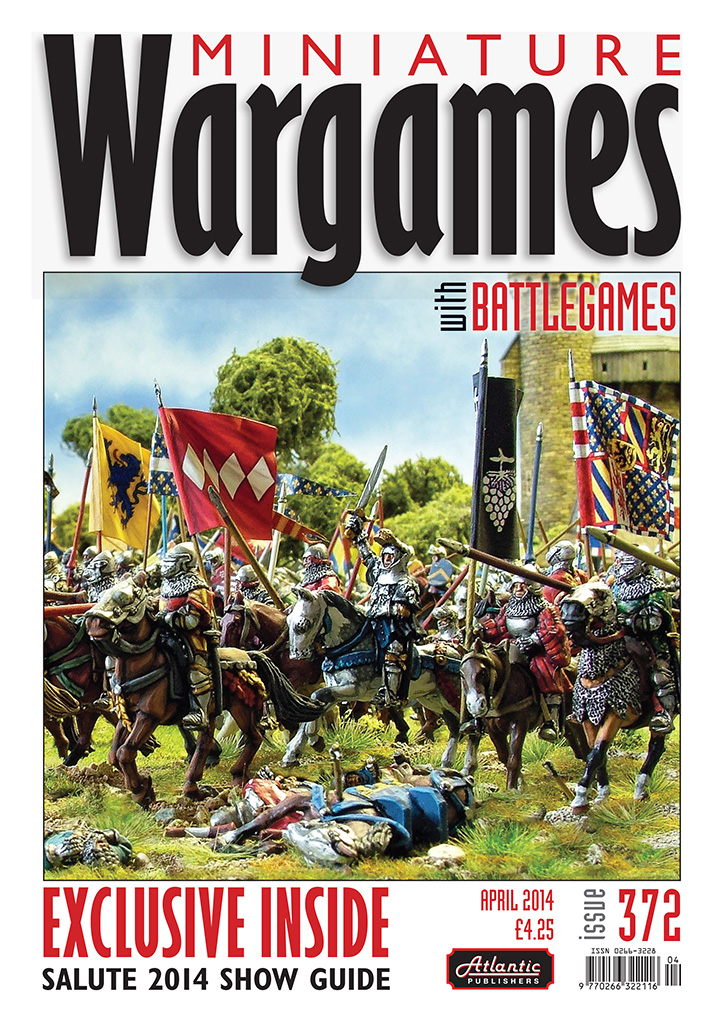 From 2011-2016 I became editor of the merged Miniature Wargames with Battlegames before I left to pursue my own projects. My first book, The Wargaming Compendium, was published by Pen & Sword in 2013 and its follow-up title, Wargaming Campaigns, is due to be published towards the end of 2019. I have dedicated a great deal of time and effort to supporting the miniatures wargaming community over more than a decade, and was instrumental in helping to create the Don Featherstone Commemorative Weekend which takes place every spring at the Wargames Holiday Centre near Basingstoke in the UK. 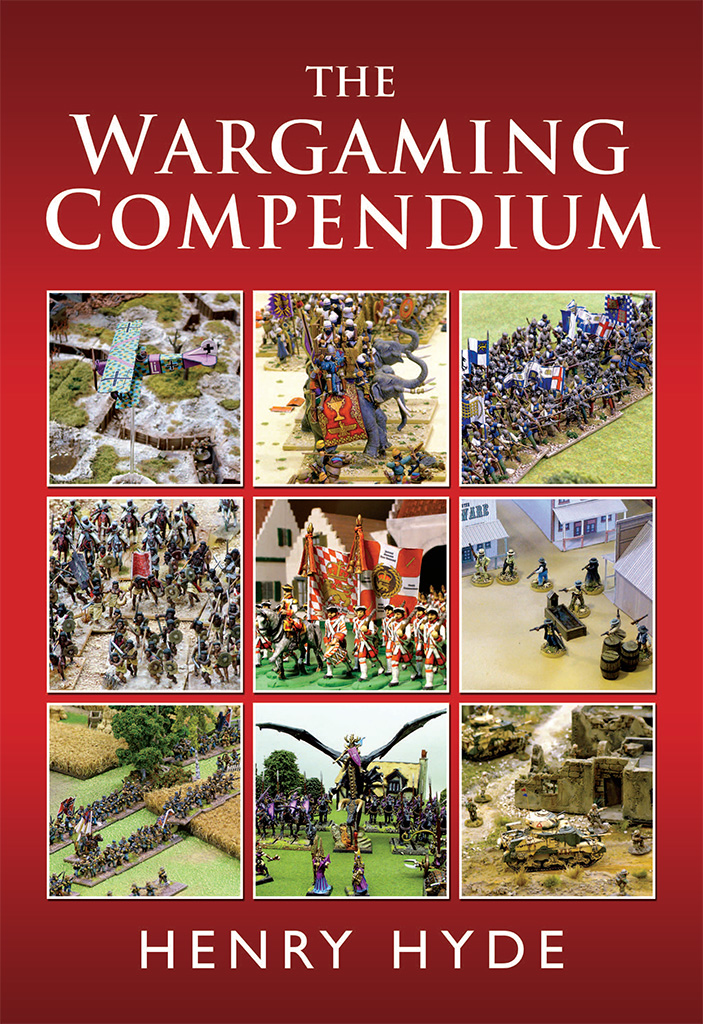 The Wargaming Compendium became, to my surprise, a best-seller and it continues to sell steadily in hardback, paperback and ebook formats. In fact, to my surprise, the Kindle version hit Number 1 status in several categories on Amazon UK, US, Australia and Canada in the spring of 2019. I'm incredibly grateful for this, and also for the interest shown in the Shot, Steel & Stone horse and musket era wargames rules it contains. These rules have been used at the giant imagi-nation games played at Ayton which featured in my magazines and on various blogs and their development and expansion continues. There is a Facebook page and group for the rules, and they will feature from time to time in my Patreon posts. 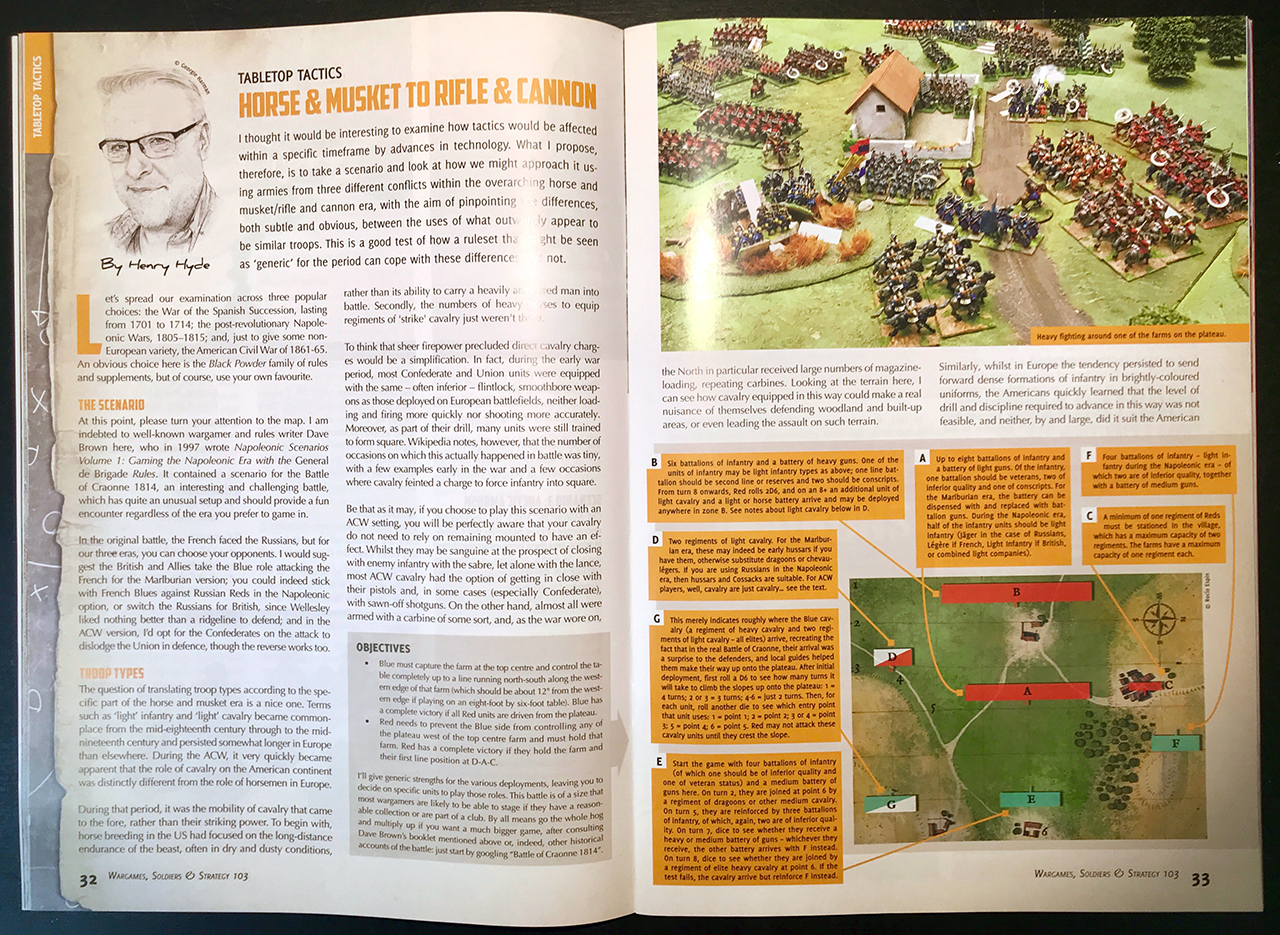 I continue to work in hobby magazines too. I had a brief stint at Wargames Illustrated but for nearly three years now, I have contributed a regular, bi-monthly column toWargames, Soldiers & Strategy magazine focusing on tabletop tactics and the art of winning wargames. This gives me the chance to combine my love of maps and scenarios with historical research and a degree of speculation. In short, it's fun! 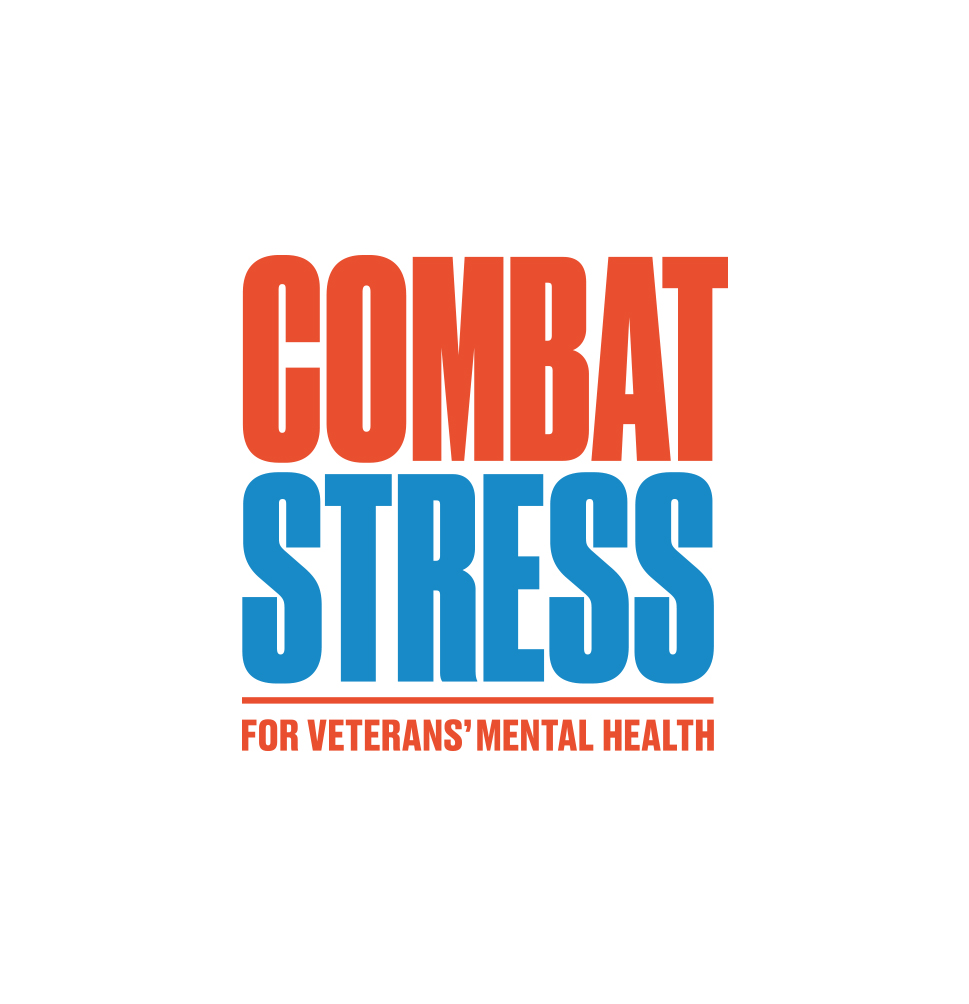 Many wargamers also know me for my support of the Combat Stress charity which helps veterans of the British armed services suffering from PTSD and other mental illness resulting from their service. The Battlegames Combat Stress Appeal has been running for 10 years and has, at the time of writing, raised nearly £30,000 for this important cause. I intend to continue supporting and raising money for the charity indefinitely, so you are likely to see the Appeal featuring in my Patreon content from time to time. 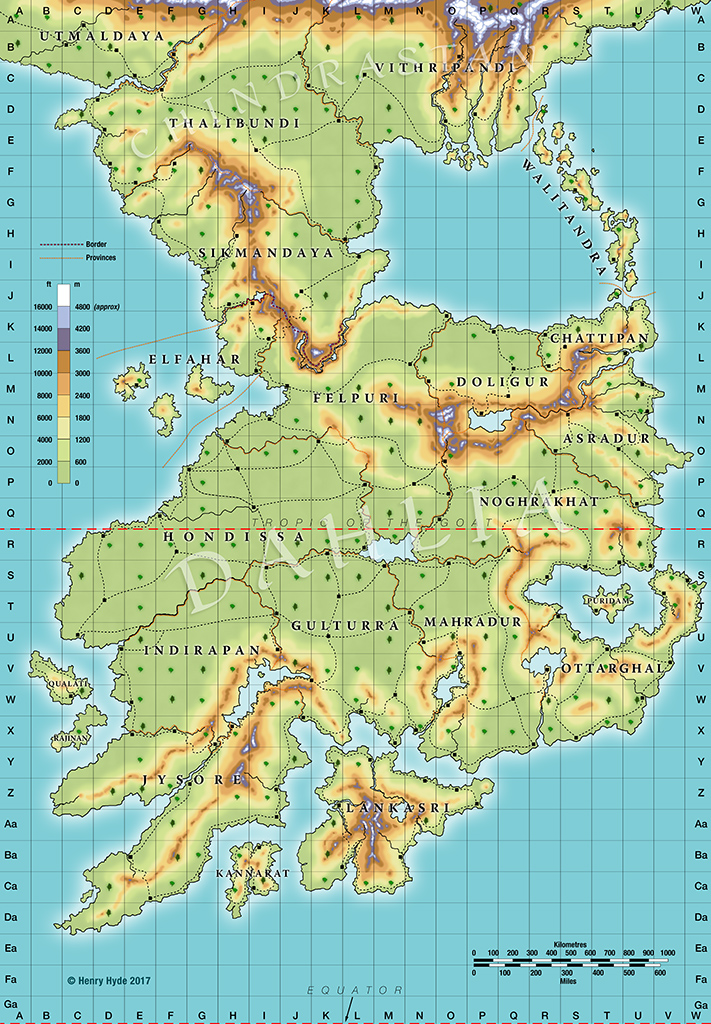 I combine the skills of writer, designer and editor and, nowadays, videographer and, with about 30 of my own Battlechat podcasts so far, podcaster too. I featured alongside Neil Shuck of Meeples & Miniatures fame in our occasional View from the Veranda podcasts, and I show up from time to time on Jay Arnold's The Veteran Wargamer show and Jonathan Reinhardt's Wargaming Recon. I'm also known for my skills as a cartographer, both of simple wargame battlefields and highly detailed maps of fantasy and imagi-nation worlds. I put all these skills to good use to provide high-quality and professional content for my Patreon subscribers.

But the most important thing about Patreon as a model is that, rather like the patrons of the arts of previous centuries, it creates a direct link between you, the consumer, and me, the creator. More than just a financial transaction, it creates a bond, a deeper level of interaction than is possible if you were just buying a magazine off a shelf or a picture off a wall. Your input, suggestions, feedback and requests are crucial in creating my output, to build a body of work that is satisfying to both of us. Already, patrons are helping to shape my ideas about what to create, how often and even at what size, such as the length of podcasts and so on. If you have a great idea, let me know and I'll do my best to make it so!

But I suppose the biggest question you might have is: why am I doing this? I've been a wargamer ever since I was a young boy. My father gave me a toy fort and soldiers in the late 1960s, and when he died in 1971, I discovered 'proper' wargames books written by Charles Grant, Don Featherstone and others in local libraries. Since then, this hobby has been in my blood and I've been involved and highly visible in the industry, helping to promote this wonderful pastime, since 2005.

For various reasons, the last few years have been a struggle and, like many people, I'm having to be ruthless about what I focus on in order to produce a meaningful income. I'm 58 now, and as a self-employed person I have little to look forward to in the form of pensions or other investments – my business life has been adventurous, yes, exciting, sure, but not very profitable so far! Restarting Battlegames as a print magazine simply isn't possible – been there, done that, still have the scars to prove it. So I'm being forced to make a choice about whether to step out of the hobby spotlight and pursue other career avenues entirely, or see if I can really make a go of providing meaningful and creatively satisfying content to a wide and varied audience via the internet and the multimedia communication channels that it offers. And this, dear friends, is where you come in. 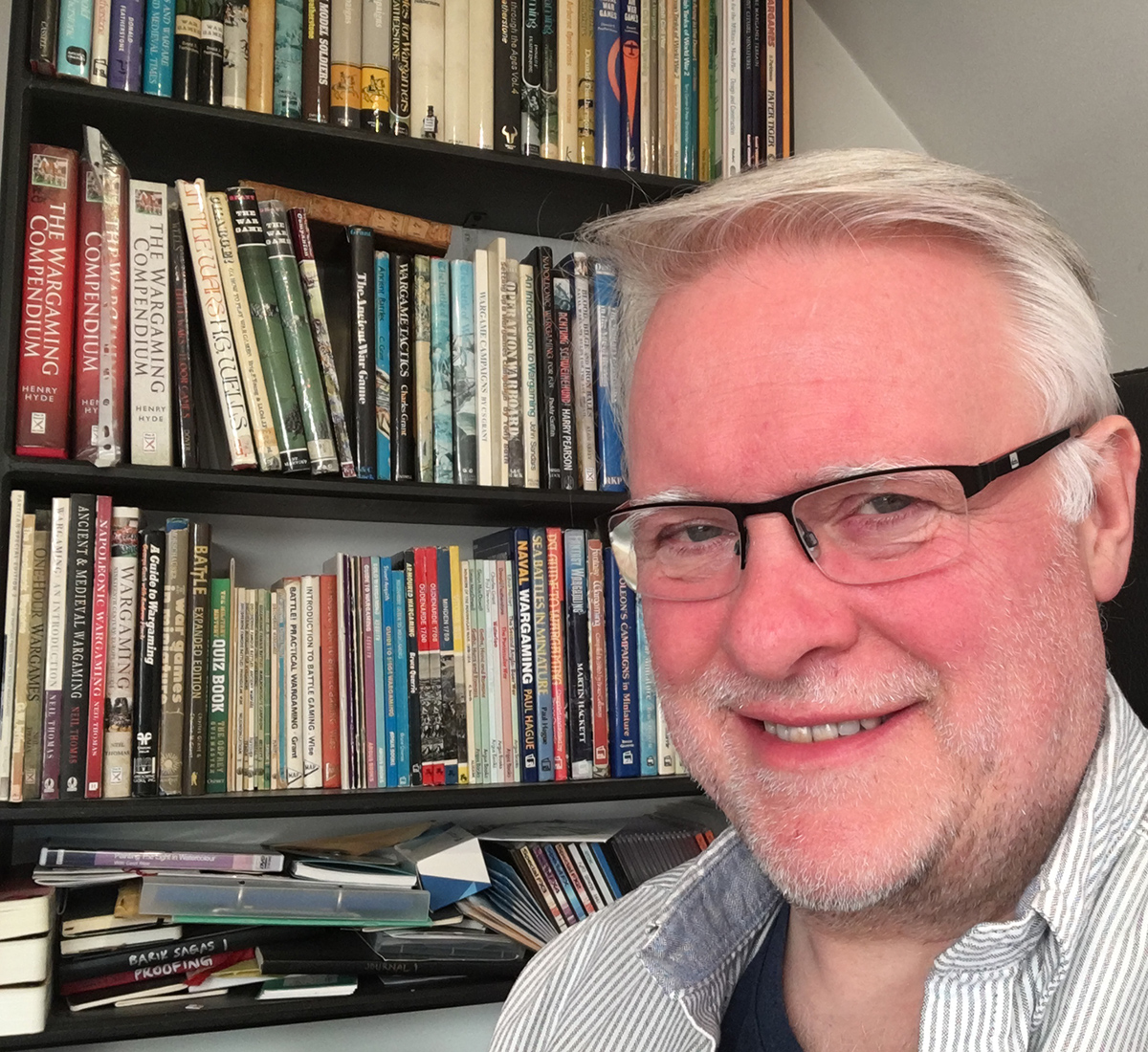 In return for your investment in my passion to create wonderful content for the hobby, you can be assured that my productive focus has you and your fellow Patreon supporters front and centre as I put pen to paper, stylus to tablet or fingers to keypad. If you don't like what I do, you can of course tell me, change your pledge amount or cancel your subscription at any time, so it's to our mutual benefit that I continue to produce work that you like and find entertaining. Unlike a traditional business model, it's much more like a partnership in an exclusive venture, and I want you to accompany me on the journey for the long haul, not the short hop.

Thank you so much for taking the time to read this. I look forward to welcoming you aboard as a Battlegames Patreon Sponsor at whatever level you feel comfortable and providing you with content you love for many years to come. Please spread the word!

A QUICK NOTE ON DOLLARS AND VAT
DOLLARS: Patreon is a US company, so the currency is shown in US Dollars. At the time of writing, here’s an approximate exchange rate for my UK Patrons >> $1 = £0.79. In today's global village, I hope you’re happy to support me even if USDs aren’t your native currency.
VAT: Due to European Union regulations, Patreon need to charge VAT on pledges made by EU-based Patrons. Therefore, if you live in the EU, please bear in mind that the Reward values will have VAT added. Click here for some more info about it from Patreon.

$1,536.70 of $2,500 per month
BRIGADE LEVEL
At $2500+ per month, this starts to become a serious business to which I can devote a significant amount of time and resources. It will mean I can afford to outsource some of the more technical aspects of the business to specialists, whilst exploring the possibility of creating paper publications using short-run or print-on-demand technology which Patreon supporters at Officer level would receive free of charge and other Patreon supporters at a discount. At this level, travel to shows and businesses in continental Europe and even beyond become a possibility.
5 of 6