*all Canadian funds are approximate

- be listed as a patron in the print magazine

In September of 2016, the first issue of Blank Spaces was released.

They say 'fools rush in' and that may be true, but I say 'dreamers step out in faith' - and that's exactly what I did. In May of that same year, I published a 'Why Not' manifesto on my personal website where I cast my vision and called people to support the work I hoped to do through the production of a publication like Blank Spaces. My heart told me to create something that champions other creatives like me who felt stuck and unheard. I wanted to be the voice of the fearful, to coax out the closet writers, artists, dreamers, to build something from the ground up that would put a little beauty into the world .

The outpouring of support was tremendous and overwhelming. But it was not financial. I started Blank Spaces with $0 capital. Everything that went into getting it off the ground came from my own shallow pockets. As time went on, and the magazine proved its worth, a few people stepped forward with donations, and this certainly helped to off-set my personal costs. It hasn't been until the release of the second anniversary edition (our ninth issue!), that Blank Spaces actually paid for itself - meaning I didn't have to dip into my personal funds at all. What a victory!

So, this begs the question: what's next? I have maxed out what I can do on my own. Now that I'm no longer losing money (to be fair, I have yet to repay all the 'personal loss', though I'm considering that an investment in perpetuating the future of Canadian art and literature), I'm content to keep chugging along, doing what I've been doing, making a tiny dent in the lit world.

Blank Spaces is my darling and part of me wants to hold it close and protect it from the big wide world, but why should I? It's not really mine. Not anymore. It's yours. Every one of you who have already invested by submitting, subscribing, and sharing on social media. It belongs to all of us and it deserves the attention of anyone who might benefit from its mission to champion the art of Canadian creatives.

So that brings us here. How do you grow a thing that's reached the max of one person's abilities? You stand on a street corner, declare your goals, and hope someone drops a penny in your hat!

That's what I'm doing here. I'm asking for your partnership to help me see this thing to its fullest potential. Please take some time to look through the goals posted on the left. Each goal will get Blank Spaces closer to the wide reach it really deserves. Many hands make light work. You don't have to give a lot to change a lot. If you believe in me, if you believe in Blank Spaces, if you believe in the importance of supporting the arts in Canada, then please consider partnering with me on a monthly basis to help raise this baby up into a full sized change-making inspiration! 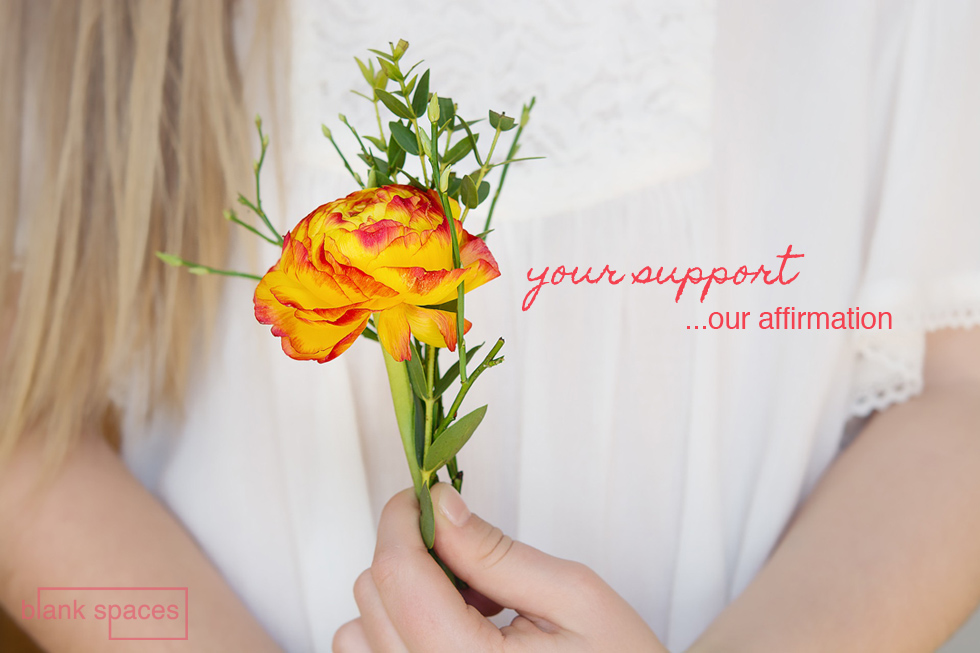