$1
per month
Join
Get a patron-only perspective on my work.

Includes
Name In The Credits

$5
per month
Join
As a patron, you'll be recognized for making my work possible. 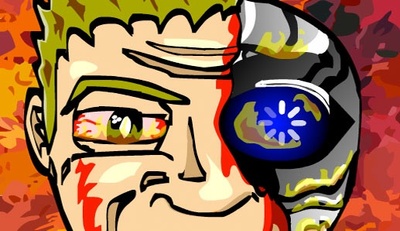 $10
per month
Join
One signed digital poster coming your way!

Back in 2005, I created Mama's Boy. I wanted to break the mold of shows about "dads and their families" that was constantly being displayed/sold to me on my TV screen. This show was more centered around a college student who still lives at home, engaging in episodes of college life/partying/existential crises, with his family members just kind of "being there as needed". I also offered a (then) original style of "anime-characters-acting-american".

Over a 5-year period of being stationed in the army (with a limited social life/between deployments) I created a pilot episode and a few completed episodes to follow. Needless to say, the major networks did not welcome my new "campy" format, the early days of YouTube gave me a constant "fair use" headache with music/sfx, and although my animations received generally positive reviews online and a significant viral cult-following, I feel that Mama's Boy never reached it's full potential.

Fast forward a few years: I'm out of the military, trying to brave through a recession and trying to be what society wants me to be. After a failed stint in corporate america, a few (albeit fun) few years back in college, and ultimately working off student loans behind a bar, I've been occasionally turning my eyes and ears towards new social media platforms. Slowly but surely, I've been wanting to return to the one thing I was truly good at: animation.

Joey Goes to iHell.....coming soon....like, Halloween. And if not this one, the next. Clap your hands and believe, you fuckers!

Im already about 40-50% through making this; in the end, it's going to be about 90 minutes long...and although it may be too graphic to display on this site, I will be sure Patrons get their chance to see it.