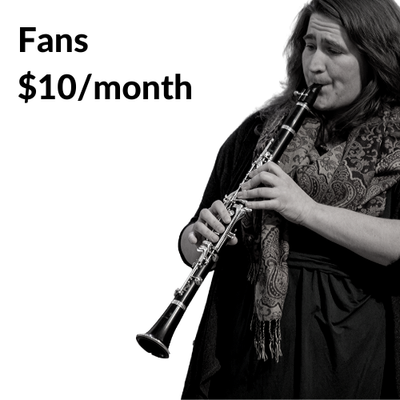 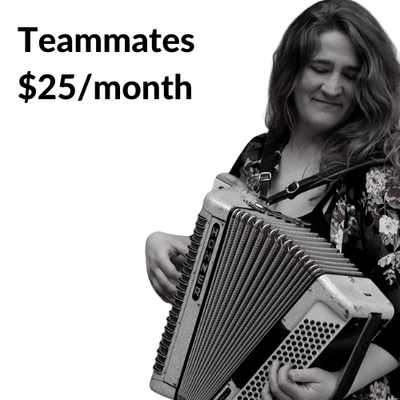 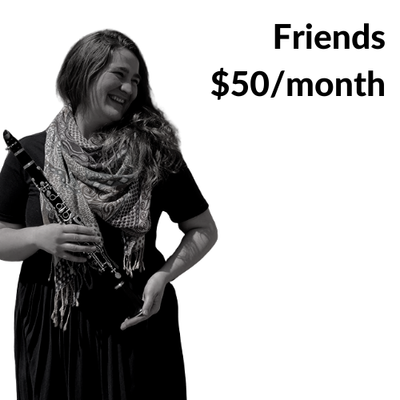 $50
per month
Join
Includes:
- Access to a monthly live chat.
- Name one of my original tunes!
- Exclusive, patron-only content.
- Personal thanks.
- First notice of upcoming shows and special events.

Clara Byom is a versatile multi-instrumentalist, electronic musician, musicologist, arts administrator, and tunesmith who has been described as having “radiant energy” and “immense talent.” Perpetually curious and driven by her Wisconsin dairy farmer work ethic, she is skilled at clarinets, accordion, and piano and deeply knowledgeable about a myriad of musical genres.

As a classical performer, Clara has premiered over 40 works as soloist or collaborator, including works by Joshua Carro, Lauren V. Coons, Patrick Debonis, Maxwell R. Lafontant, and Paul Marquardt. As a collaborator, Clara most frequently performs new and experimental classical chamber music with the New Mexico Contemporary Ensemble, which she co-founded in 2016 with Dalton Harris. The ensemble released their first album, [places of transformation], in May 2020 with Joshua Carro. Clara also collaborates with interdisciplinary artists Joshua Lorris and Lauren V. Coons, including a performance at the International Clarinet Association ClarinetFest in 2021.

In 2020, Clara started producing electronic music loosely in the genre of IDM (Intelligent Dance Music). She has released two electronic albums (orange, blue) and one electroacoustic album (VOID). Clara also frequently collaborates with lo-fi hip hop and experimental artist Dan Dan and together they released Ash Meridian in May 2020.

While in New Mexico, Clara began playing for folk dancing- Contra, English Country, Yiddish, and International Folk Dance - and writing dance tunes. Clara’s first tune book entitled On The Brighter Side & Other Dance Tunes was self-published in May 2019. Clara primarily performs dance music in The Parson Sisters with Mirinisa Stewart-Tengco. The duo has toured the Midwest and California playing concerts and dances and were on staff at FolkMADness dance camp in Soccoro, NM and Tarab Retreat in Colorado Springs, CO.

Clara’s musicology research focuses on mid-twentieth century klezmer music in New York City. She has presented her work at Yiddish New York 2019, KlezmerQuerque 2017, College of Charleston (Spring 2017), and Eastern New Mexico University (Spring 2018), and has presented at conferences for the International Clarinet Association (Summer 2018), Society for Ethnomusicology (Spring 2017) and Yiddish Summer Weimar (Summer 2016). Since the Summer of 2014, she has done archival work for the Center for Traditional Music and Dance in New York City, primarily digitizing and cataloging the field recordings of 2015 National Heritage Fellow Michael Alpert, a leading figure in the klezmer revitalization.

Inspired by community-building through music, Clara is proud to serve on the Board of Directors for the Klezmer Institute, New Mexico Folk Music and Dance Society, and the New Mexico Contemporary Ensemble. She also performs regularly with Paul Hunton’s Dust City Opera, an Indie Folk Rock band that released its debut album, Heaven, in March of 2019. Clara serves as music director for St. Timothy’s Lutheran Church in Albuquerque, NM. She holds a Master of Music degree from the University of New Mexico in Clarinet Performance and Musicology (2017) and a Bachelor of Arts degree from Luther College (2012).

What do you get from becoming a patron?
If you become a patron, you get to see the behind-the-scenes work of a busy musician, sneak peaks of projects, new tunes written for YOU, and my love and adoration.

More information about my work: www.clarabyom.com.