THE help
$1
per month
Join

(e.g. Unicorns are the ultimate tier.)

Also, you register to the criticism bonus package. So now, you're 'legally' authorized to be the bitchy troll you usually are.
(Is it salty enough ? :P )

If people are interested by it, I've opened a private channel on Discord. will be filled with full notes, scripts, character designs... Everything with full-on spoilers, years in advance sometimes.
I try to stay Spoiler-free in public, but hey.. if you like to feel like an insider... Would have to sign a NDA though, because don't spoil to others, they'll hate you for it, and it'll probably hurt me in the end, obviously, so.. Be cool, enjoy knowing everything.

ONLY THIS TIER ACTIVATE AUTOMATICALLY YOUR ACCESS TO THE SPOILERFULL CHANNEL. For other more expensive tiers, please ask if you want this access. Thanks!

Hi, future patrons and whoever,
let me introduce myself and this crazy ambitious wild adventure I'd like to take you on with me.

My name is Ben Martin aka. Coin3ip (COiNIIIP. // コアントリペ ), I'm 35 years old from France. I'm a freelance artist since 2001. I started by making clothing design, gig posters and live video recording, and made a few "official" paintings. Since then, I worked at almost all positions in the 'imagemaking' process. from printing to directing, costume design to screenwriting and storyboarding, video editing to graphic design (music albums, film posters). And of course as a photography (mainly film set and portrait) as my main practice.

Here is the link to the 'Photography' part of my website: www.danslecoin.net

More recently, I've fallen sick (Crohn) in the beginning of 2016, and since then I can't work on the field. I have mobility issues and can't stand for a day on locations (I can barely stand for a half hour). I have troubles with stairs. Even sitting on a regular chair can be painful sometimes. So I'm lying down most of the day, sadly. And it's hard to stay focus for long periods of time.
It's hard on me to have to stay in one place, cause I've been moving a lot during the 15+ years of my career, and now I'm stuck at my mom's place ( -_- ).
I've started to be able to walk again in 2018 after stopping the anti-TNFa treatment, and I'm improving... Slowly, because I'm still very lonely, but nonetheless. it's improving enough that I can ride a bike (well, pedaling even on an ebike is exhausting me so fast that I can't go far enough before needing to come back and rest, and regular bike sitting position, suspensions, and seats aren't comfortable enough. So I was searching for a motorcycle the size of a mountain bike, and that I could use to go off-road, as all my work and life is about going off-road in the wild.

Last year, I found the key to my mobility on the internets, and here we are now. 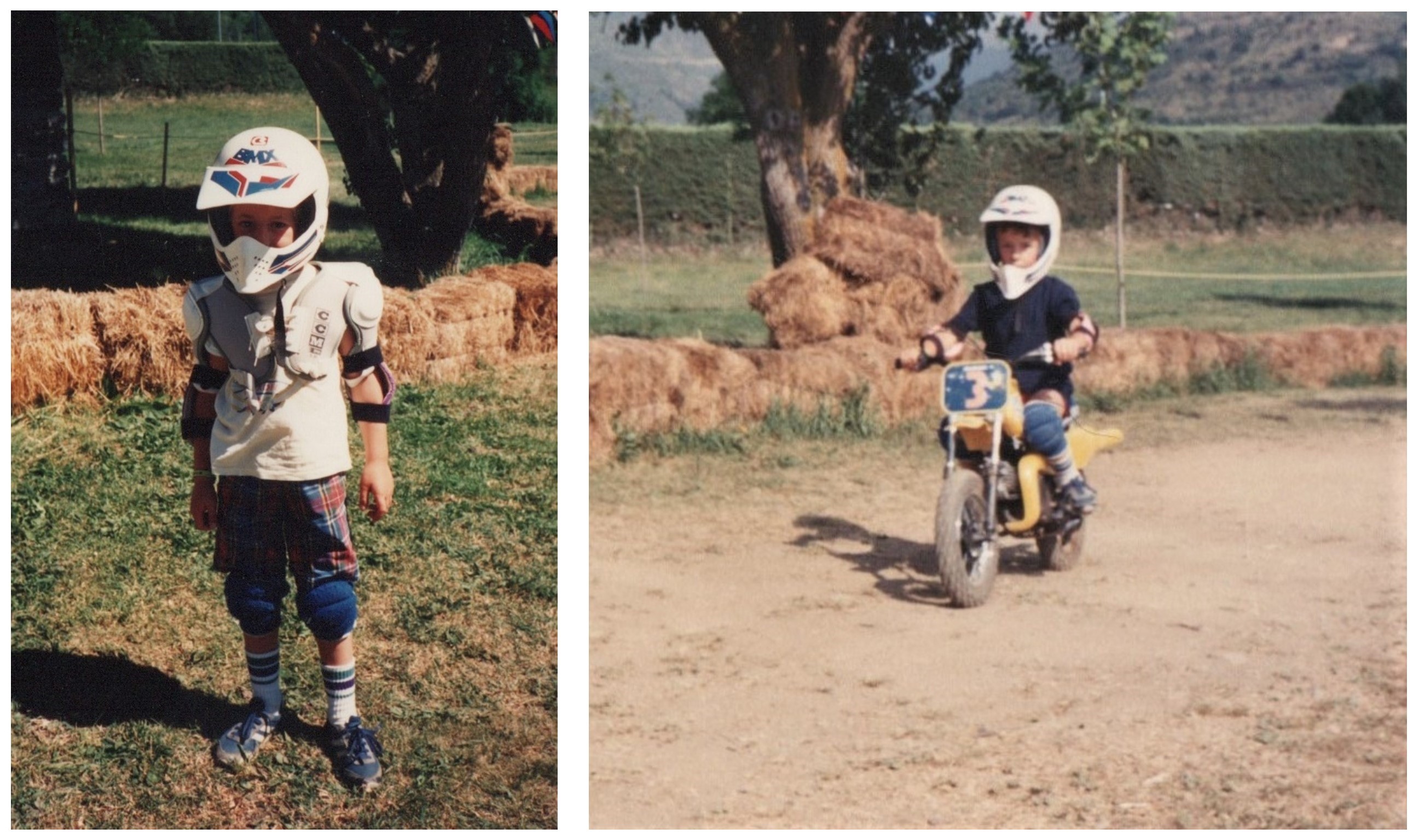 Well, this is not now, obviously, it’s me when I was 5, for my first 2 motorcycle rides :-). Summer 1990 in Osseja (Cerdagne, France). I actually remember those rides very well. As a kid, I did motocross a few dozen of times. At 14, I had a moped to go take art classes at night in a nearby city once a week (Before that at 10, I had to take a one-hour long bus to get photography lessons).

And 20 years ago in August, there was a solar eclipse (ok, it’s completely unrelated, but it was very cool ^^). I didn’t know at the time but the week of the eclipse was the last time I was on a ‘motocross’ until now (I had a scooter in 2003, but it was a very cheap thing and a friend ‘killed’ it). At the time (in 1999 – I’ll talk about why I stopped for the anniversary of the eclipse, probably), in terms of bike power, my sweet spot would have been a 125cc, but I didn’t like the size, too tall. I wanted to ride more on open roads and slight trails anyway, I always been fascinated by supermoto (I did some drawings at the time - I might search for them), and absolutely love Trial bikes since I was going to the “international competition” in Saillagouse (Cerdagne, France) every year with my grandfather. I always had a problem with the sounds of moto, though. And I have terrible hand-foot sync. I hate foot controls and clutch lever. I am also interested in non-gasoline-based ways of lives (As any fan of Mad Max who make post-apocalyptic films themselves would do ^^ ).
Also, my disease made my body even weaker that it was before that ^^ (I lost 20Kgs in a few weeks, and wasn’t completely able to stand up for more than a year. Crohn’s disease). Now that I start feeling better enough to go out and take care of things like grocery shopping, everything is so far, I get tired very fast, after walking 15 minutes top, and in this time I walk about 500m max. There’s just anything useful I can do in this range besides post office, kine, and pharmacy. And it’s just city-like roads with cars, so even just for walking around... well, I need more nature than that.

Anyway, put all of this in an overthinking mixer, add some research time, tons of frustration, splashes of resilience, few lucky clicks, one Czech moto maker with a design that checks all (or most) the boxes (thank you Michal Kubanek for making this bike, and the technology to catch up on our dreams and makes small and well-performing bikes), a potential lifetime of debt upon me, and BIM, here I am with an electric 'Kuberg Freerider Street Edition', and the plans to mod it as a Mobile Autonomous Solar Campsite (.M.A.S.C.), make it for real, make content about the all thing, and in fine, a third film Eenola that will come closing a trilogy 20 years in the making (2005 (Eenola) -> 2015 (AFYA) -> 2025 (title to be revealed later)). Also, I’d hope tons of other things and surprises along the way If things go well, of course. But I don’t want to spoil all the ideas and detailed plans right now at the beginning).

For the moment, I give you only the first concept I made of this .M.A.S.C.
As I'm working on the technical documents to present to the potential partners for the build.
What's this MASC ? Imagine you can ride 30 to 50 kms, then, setup camp. sleep the night, take your time, wait for half the next day for the battery to recharge, then pack up the all thing, and continue your way 30 more kilometers to find a new place for your campsite. and repeat all you want til you reach your destination. And then, wait for it to recharge, and then go further more. You can imagine all the possibilities that  a self-contained and self-recharging motorcycle could open. You won't be the fastest, you won't go the farest (on a single charge), but you'll be able to be out there the longer, being the less disturbing for nature, and having the less impact possible on the environment. Or an exploration vehicle to go camping on the weekend and take wildlife photography. A machine to go camping on the weekend or to live your best life in the Wasteland.
A catchphrase could help explaining the idea... :-) 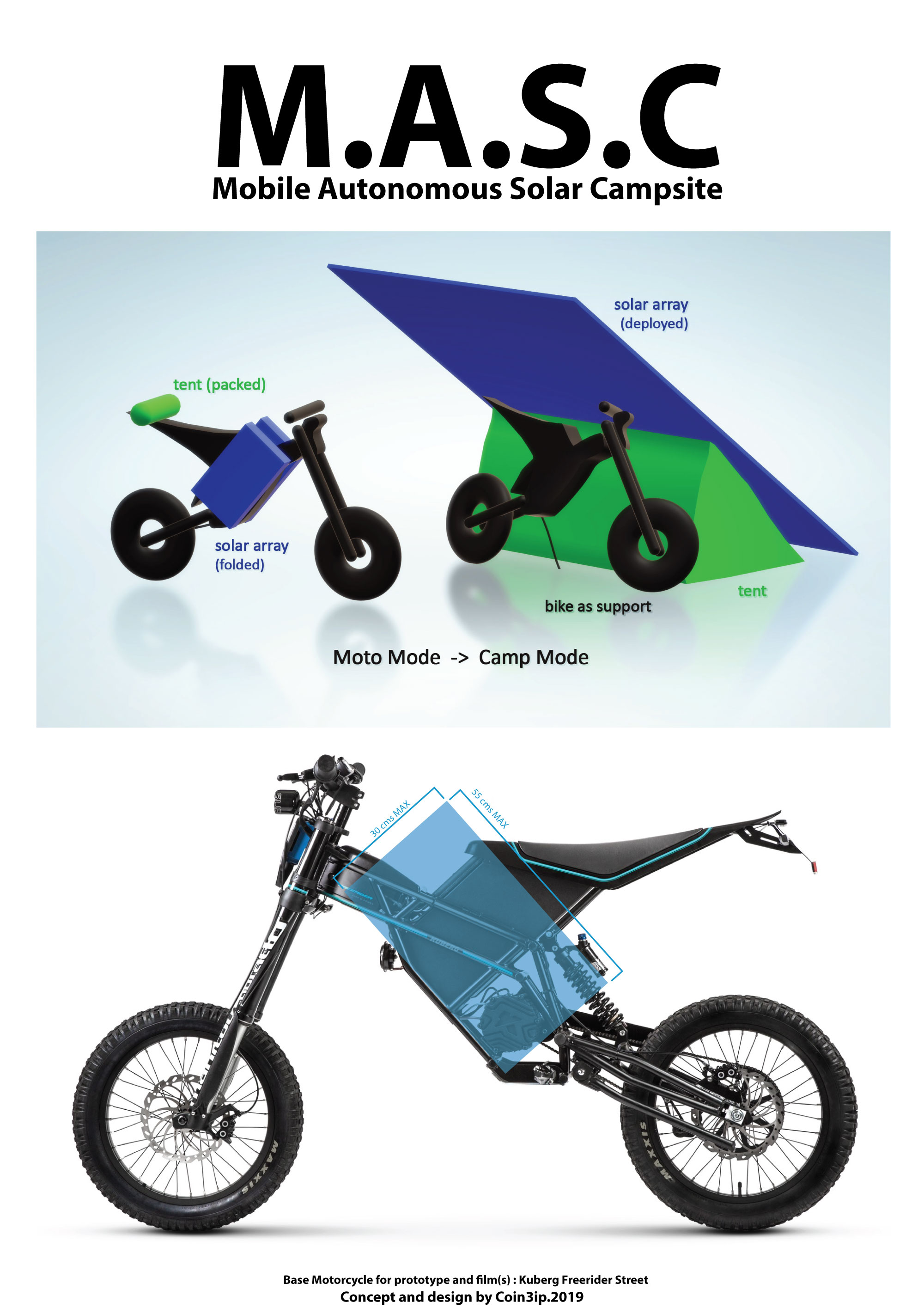 So, here's the bike. Finally.

it's "only" took 2 months to get my licence plate since the bike delivery, but I'm allowed to ride it now :-) and I really love it so far!
(more pictures for patrons only)

this is me now.

and then next : FILM PITCH AND TITLE REVEAL ?
maybe... We'll see.. it's really early to talk about the film.


So Join me in this adventure ! Support, Follow, Add, Subscribe, Like, Click on the Bell icon, Do any, or all of the usual (or none), to keep you updated about the project and don’t miss any future developments. Obviously, advantages come with support, benefits with engagement, and joy and happiness with .. your loved one(s), actually :-)

Anyway, Thank you for taking the time. reading, helping, joining, participating, everything really.


ps: I'm also gonna need more substantial investors, partners, sponsors, and people to work with along the way. If you think you can help (or want to help), contact me !

note: I'm new at this Patreon-thing, and it will be streamlined with time, as more people join us.
We'll see how it turns out !

Eenola is my main personal project. I'm working on it since the first short-movie in 2005, from an idea I keep having since childhood, to a second film (AFYA) released in 2015.
I invite you to visit the official website www.eenola.com to learn more and watch the films.
(There's ton of pictures, the 1/6th scale figure, lego Brickheadz, posters, music, merchstore...)

- Creative Clusterfuck is the social hub (located on a Discord server) whose goal is acting as a more useful and less distracting social networking experience.
- And it's also the stupidly funny name of my Discord server. There are tons of things to watch there already, about anything and everything...
- It's an instagram account with funny drawing I do, sometimes. www.instagram.com/cstrfk

By supporting me here on Patreon, you'll have access to Patreon-only channels on the Creative Clusterfuck Discord server.

It's mostly where everything happens.