I founded what is now Composr CMS back in 2004 and since then have been working crazy-hard to get the platform to where it is today.

This Patreon is for raising funds for the direct development for Composr, as well as for producing support materials and infrastructure. All money goes directly to fund my individual contributions, rather than going through my company.

In the past I haven't sought direct contributions, favouring direct feature sponsorship and professional services. However the truth is that most English-speaking people have less money to directly cover the cost of sponsoring whole features, or hours of 1-on-1 support - plus expectations for websites have kept going up. So I want to solicit small contributions from a large number of people so we can keep making Composr a better DIY product. Composr was founded to empower people to create awesome sites - I want to focus as much as my energy as I can directly into this mission.

I really want to keep development focused on the needs of users, not the pet-projects of volunteer developers. So I firmly believe in operating primary development as a paid professional activity. Other projects have their own direction, and are great in their own ways, but creating a really streamlined experience is fundamental to Composr. I believe that the only ways to do that are my way, or selling out to big money (which I believe would be bad for users long-term, resulting in a crippled product and constant up-selling).

Every $1 helps me keep the project independent and focused on quality. Even if you can't support the project financially there are also many other ways to help. Even if we get one feature developed per month, that's a big win - we don't need to do all ideas on the tracker (that'd be over 10 work years of time, but we'll get there).

Thank you, let's help keep the DIY-web alive and not give in to everything being a dumbed-down silicon-valley data-mining product.

Here's our cool T-shirt for the Swagstr level and above: 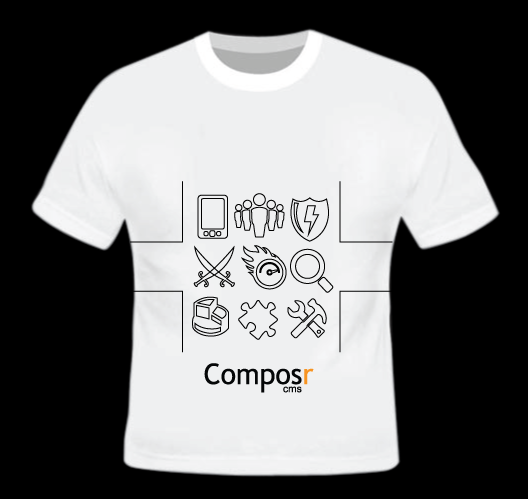 $63 of $125 per month
We add 3 hours of development each month, tending towards the more popular items on the tracker (with some discretion).
1 of 6