is creating an application for crowdsourcing scientific controversies

per creation
Become a patron

(The attached video is my own personal recording of a speech I gave in 2016 on the reform of science journalism and science education.  If you are interested in viewing the first part of that presentation, titled What We Failed to Learn from the Moonshot, you can see it here.)

Why You Should Greatly Care

There is something you need to know about scientific controversies:

Your own personal reaction to controversial science says much about the depth of your own thinking and your own propensity to lead. When we treat controversies as an open-ended clash of worldviews where the answer is not already known, we sharpen our critical voice, we develop the habits of higher-order thinking, and we open the door to becoming effective leaders.

There is "normal" science, and then there is controversial science. Normal science is science which has largely stabilized because there's a general absence of anomalous observations. It can be reliably treated as a body of knowledge.

But, what about science which has been contested?

When science becomes controversial, we have to prepare for the possibility that there may be a mistake in our body of knowledge. To the extent that we refuse to do so, we abandon the aspect of scientific theory which distinguishes it from other aspects of our culture -- it's provisional nature.

What has been overlooked in the science journalism and science education which dominate today is that there are processes happening in each of our own individual minds which greatly resemble this never-ending process of change we see at play on the larger stage of the scientific world. And just the same, when we fail to actively engage with controversial science at the personal level, we are diminishing our own personal propensity for change -- which sets into motion habits which then limit our own leadership capabilities.

Much can be said about the two diagrams you see here.

The first diagram relays the results of two separate studies which collectively suggest that only a very small portion of the population -- around 8% -- will ever learn to question their own personal worldview (the "self-transforming mindset").

We'd be wise to ask why these numbers are so low, and there is an answer to be had in the diagram below. 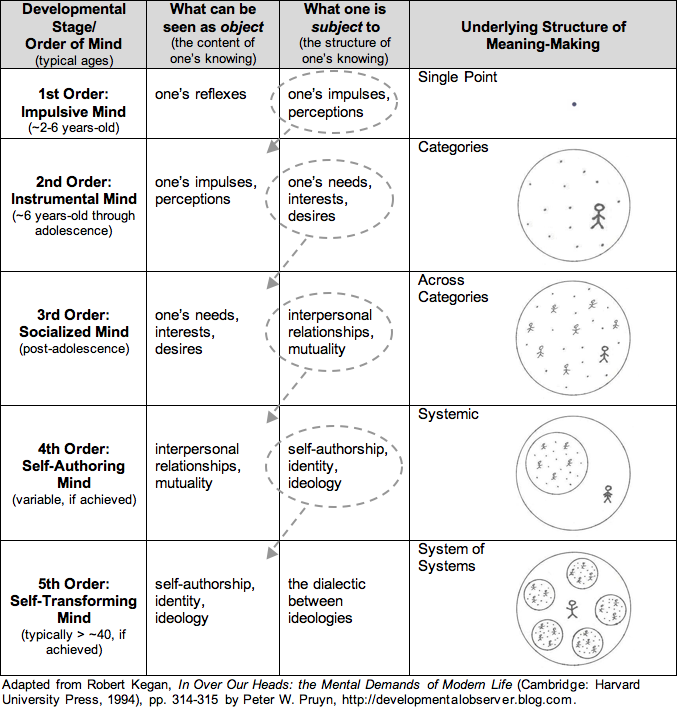 The heart of the problem is this: to get to the true complexity of a scientific debate, a person has to be willing to entertain the notion that there exists a mistake in their own personal knowledge. And as the diagram above shows, to succeed at critiquing ourselves and our beliefs, we must ourselves go through a personal transformation. We have to cross what is called the subject-object barrier, from a state where we are in the grips of our existing worldview (e.g., subject to the textbook theory) to a state where we can discuss this mainstream worldview as an object.

We are talking about two different minds here: It is not merely a technical challenge to cross the subject-object barrier; it is an adjustment to the machinery of the mind itself. There's not -- yet -- any place that a person can go to systematically learn to transition the subject-object barrier. It's a tricky thing to teach because it requires an educational medium which can set into motion for  each participant a process of asking difficult questions.  Scientific controversies are the perfect medium for this purpose.

The next step (which is ongoing) is to add additional sources of data.  I am currently adding a list of 2,000+ quotes specifically related to scientific controversies curated by one of the world's leading critics of mainstream science, Wal Thornhill.

The search box scans my collection of 182 controversy cards, generated from a large personal library cultivated over the past 12 years on the subject.  This list is an extension of the bibliography supplied to the Institute for Venture Science by science critic, Henry Bauer, Dean Emeritus of Arts and Sciences at Virginia Tech.

The selection of controversies has been vetted over the course of decades by an informal collaboration between against-the-mainstream scientific theorists and laypeople.

Controversies are selected on the basis of how much is at stake, and their chances of long-term success.

Beyond identification of key controversies, an important objective for this project is to create tools which permit the public to participate in this process of aggregating information about them.  The emergence of the Internet enables the mining of "long-tail" (aka Power Law) information -- that is, information where each participant usually has just one (if that) contribution to make.  Scientific collaboration follows a Power Law: Given a system which bins the information so that it can be properly discovered, creative collaboration becomes a numbers game; the more people who participate, the better the coverage becomes.  This is why I've chosen AWS to build this system out: because it takes care of most of the scaling concerns for us.

Additional objectives for the app have evolved as a reaction to my 12 years of observations running scientific claims online.  I pay close attention to reactions of professional critics and laypeople.  A most important observation has been a widespread failure to understand what a "worldview" is.  Therefore, I've set the objective that the app must teach the structure of science through its use (a concept rooted in the work of science education theorist, Bob Gowan).  I'm in the process of building out this user interface right now, using a system of swipes.

There are several categories of controversy cards:


These cards are constructed as atomic units which can be aggregated into curricula.  The existing collection of 182 cards can be observed at the Controversies of Science G+ collection.

Scraper scripts have already been constructed.  These scripts permit me to auto-populate my app's API's with the social media posts in this collection.

Why We Have to Build This

When I was in high school, I took International Baccalaureate (IB) classes in literature, where I was taught to think critically about classic texts through a process of re-interpretation from different, sometimes opposing worldviews.  There is no doubt that critical thinking can be taught as a skill; the reason it has proven so elusive in the sciences is because it can only be taught through a process of engaging opposing worldviews.  What I am building out for science is a platform which systematizes for science the IB's approach to teaching critical thinking in literature.  I have no formal training as a science education theorist, but I have read enough about constructivism to understand that the universities are approaching scientific controversies in the wrong way (a positivist approach).  The academic approach of focusing the student upon just one single worldview -- the officially sanctioned textbook worldview -- actually precludes the formation of the student's own critical voice (what some may call "higher-order thinking").

The universities are teaching students to be subject to that textbook worldview.  We need a program which instead helps students to discuss theories as objects.  Such a system dedicated to questioning the claims of academics will never be built by academics; it must be constructed by an outsider.

I've by now spent 12 years embedded into one of the world's most vocal groups of scientific critics.  They've challenged the Big Bang cosmology; they hold yearly conferences attended by hundreds, which I've spoken at; the theorists have spoken at NASA; and they've published a number of technical papers proposing alternative models for the Sun, for supernovae, for galaxies and for the universe.  They've built a simulated star in a laboratory to test their claim that the Sun is partially powered by electricity.  They claim to know the answer to the dark matter problem, and they point to work done on government supercomputers to make their case for this claim.  They also claim to be able to explain large swaths of the mythological archetypes using recent findings in laboratory plasma science, and even claim to understand where life in the universe originates.

All of these fascinating claims go largely ignored.

The most important lesson I've learned from watching this group struggle to be heard out is that there are important technological innovations on the other side of many current, ongoing controversies.  And if this proves to be true, as I'm sure it is, what that means is that we can speed the rate of global innovation by simply streamlining and systematizing the ways in which we interact with scientific controversies.  In fact, there's a strong argument to be made that many of these innovations will never occur until we decide to do this.

Please check out the G+ collection.  Try out the search.  Take a look at my github.  There's additional background here.  Please help me to build the app which academia refuses to build.  Trust me: Once they see it in action, they're going to copy it.

I know what the problems are.  I know the history for how we got to this point.  I know what is going through the heads of people who are learning about some controversy.  I have firsthand experience with all sides in many of these debates.  I know what to build, and I know how to build it.