Get early notifications of new video releases and stay up-to-date on our latest projects and events.

Become an important sustainer for the mission of Cosmic Perspective. In return you'll get access to special directors cut video discussions. 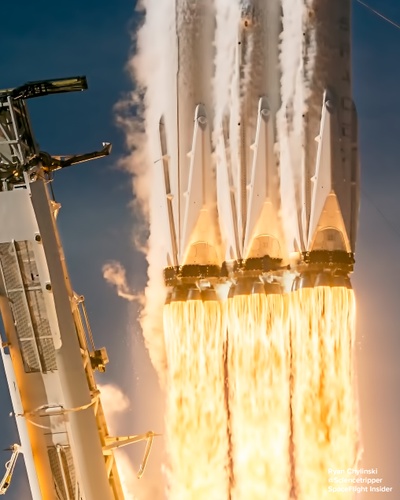 Become an important sustainer for the mission of Cosmic Perspective. In return you'll get access to special directors cut video discussions and high-resolution image downloads (including previous missions) and special shout-out in video descriptions and our website http://www.cosmicperspective.com .

It's time to get excited about the future!... and it's also time to reach as many people as possible with this message of optomisism. Beauty holds a key.

Since we were kids, footage of rocket launches have thrilled and captivated us. Counting down with a crowd of people, ready to witness tremendous amounts of human engineering all culminate into a fiery, chest shaking, human-made sunrise on the horizon... it's unlike anything else we've experienced before!... and it's the most exciting, beautiful and unifying adventure imaginable.

Now, as a storytelling media we've dedicated ourselves to documenting our grand adventure to space in new, cinematic and immersive ways. We also take this footage beyond Youtube and on tour into communities across the United States, sharing our progress into space with as many people as possible.

This patreon directly support the visual, immersive and outreach work we do to document these important events, archive the beauty of rocket launches and share the importance of these people and this time in history.

By supporting Cosmic Perspective, you're helping with the immense time and money investment required to build, test, and deploy launchpad cinema and still cameras, as well as plan, edit, and archive the precious footage in the best ways possible.

We are so lucky to be alive now as we prepare to live off the planet, permanently for the first time. With you're help we're amplifying these inspiring moments of beauty, optimism and excitement that emanate from the Space Coast (and Wallops Island and Vandenberg California...and others...) to all places.

Photography, Story & Film from the Launchpads

We use remote autonomous cinema and ultra high-speed cameras placed at the launchpads of SpaceX, NASA and ULA

Using augmented and virtual reality we also transport audiences directly to the launchpads and to intimate interviews with astronauts, inspired artists and the people sending missions to space.