is creating multi-language pages and a new visa program for coworking.org!

$5
per month
Join
Be listed as an official supporter on our site and get a thank you tweet!
Limited (50 of 50 remaining)
$10
per month
Join
GCUC Canada special:
We'll send you a limited edition stamped coworking notebook!
$25
per month
Join
Small City Sponsor
Help us overhaul the listing page of a small city! You'll get a visible thank-you with a link to your site on a city page with a population of less than 250,000 people. 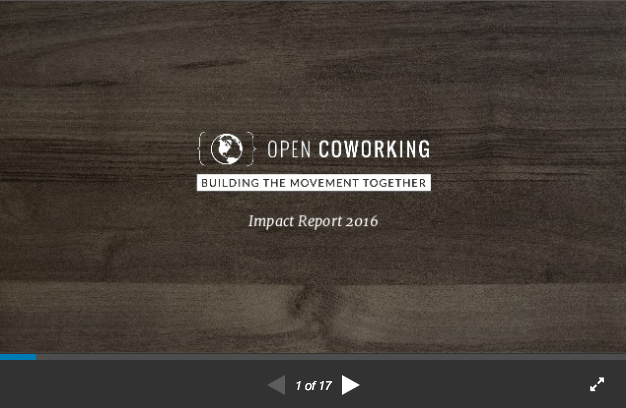 Click to view our presentation
Since 2005, the coworking movement has been helping hundreds of thousands of people around the world beat the isolation of working from home with a new way of gathering and building community.

Started by an independent software developer in San Francisco, the idea started catching on everywhere as more and more people started working on laptops with wifi. Once people were free to work anywhere, they largely decided to start working together.

Over the years, people who rallied around the coworking movement developed free, open source platforms to share their knowledge and discuss their ideas. Decentralized and managed by volunteers, these resources have helped to make coworking a household name.

Now, however, as the movement matures, more work must be done to help maintain and improve the incredible culture that makes coworking so special.

To that end, Open Coworking, was established as a nonprofit specifically to ensure these resources are preserved and continually improved.

We oversee the ongoing maintenance of the following core resources:
Collectively, these resources are visited by thousands of people every month, from all over the world.

In addition to developing the core infrastructure for ensuring these resources stay online and secure in the years to come, we've also:


WHAT WE'LL DO NEXT

With your support, we'll tackle the following and more:

The Coworking Visa is being used informally by hundreds of coworking spaces around the world to facilitate connections between coworkers everywhere.
It helps to reinforce and perpetuate the collaborative and open sharing spirit that originally made the movement so special.

Right now, however, joining and administering it is painful and confusing.

With just the right amount of thought and effort, we can build on what exists to make a Visa program that will make it even easier for others to join and participate in.

2. Reach the next billion coworkers through multi-language page support.

All of the resources we’ve developed have been tremendously valuable in reaching and helping the many who have been curious to learn more about coworking and the roots of the movement behind it.

Now, as we look ahead to those who will be discovering coworking in the years to come, one thing becomes very obvious: they’re not all English speakers!

To that end, we’ll continue the steps we’ve taken to connect people to resources in their native language, so the movement can connect with those already doing good work in areas where English isn’t the way people communicate.

The Coworking Wiki is home to a directory of thousands of spaces in hundreds of cities, making it one of the most comprehensive compendiums of coworking anywhere.

By virtue of being a wiki that’s evolved organically without much supervision for so many years, however, it’s also also unfortunately one of the most outdated and messy such directories you can find.

Overhauling it is a daunting task. To abandon it altogether would be to give up a resource that still reaches thousands of people every month, so a clever new approach must be forged.

We’ve worked to lay the foundation for this shift, and hope in the coming year to crack the formula to finally help this directory take the generational step it must.
How far we're able to get with our goals will depend on you and the support you're able to give. Anything helps!

We're committed to supporting the healthy growth of a movement that has changed our lives and the lives of so many others for the better.

In addition to embodying and upholding the core values of coworking, we have also made commitments of our own:

Learn more about us at OpenCoworking.org

$4.33 of $500 per month
We'll be able to bring on a dedicated content editor, who will oversee the onboarding of new volunteers and the production of new content.
1 of 4