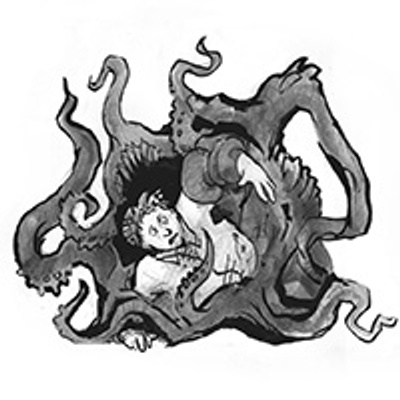 This is the tip jar level. You like the stuff and want to show support. At that level: 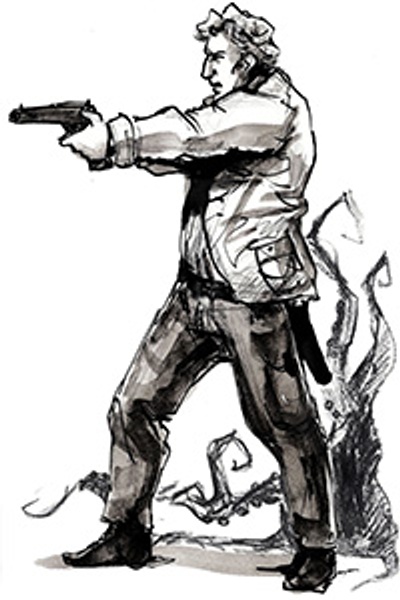 The core supporter level. You like the stuff and will have: 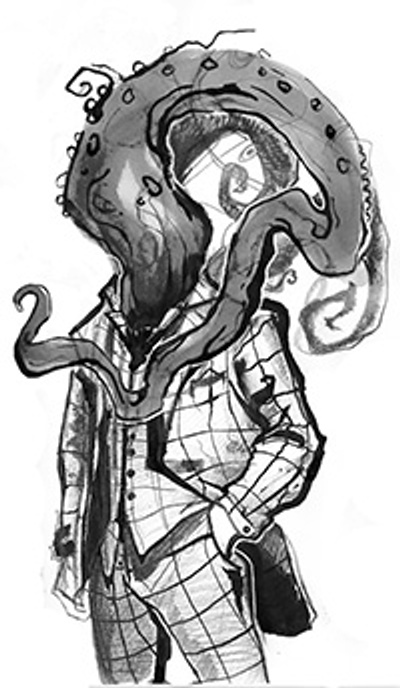 For people who want to tip big. You get all the stuff above, plus:

I'm Paul Baldowski, and since May 2016 I've been writing and self-publishing The Cthulhu Hack, a game of investigation in Lovecraft's universe of cosmic horrors based on the mechanics of The Black Hack.

I started with a core book, not really expecting to get much further than that - but by the end of the year I had a slim boxed set - and now there are almost 500 pages of material, including supplements about creating adventures, new horrors and cults.

Along the path to this moment, I have had a lot of ideas that time has not allowed me to bring to fruition. Creating content for The Cthulhu Hack and other games while juggling a day job and one or two evening commitments (like supporting my wife's business All Rolled Up) has proved a challenge. Nevertheless, I have continued to expand the published works and refined the Core Rules - and set the fragmentary, partial works aside for later consideration.

Patreon is not a golden bullet, but the support of The Cthulhu Hack (and other games, like The Dee Sanction) will mean the peripheral expenses of typefaces, spot illustration, and other material will be covered to some extent, offering greater freedom of use. Indeed, adding any artwork has been a key concern - I take a lot of time and effort to find affordable and thematically appropriate art to enhance releases; pledges will support those sort of peripheral expenses in securing limited run access to inspiring illustrations.

Each month I'll post up new content for my games, including The Cthulhu Hack. Most of the material will conform to about a page of content - a fragment of a greater work. This could be a new entity of the Mythos, a playtested optional rule, a random table, or an adventure hook - very similar to some of the material presented in The Dark Brood. In the long run, these elements will form part of a final full work - but you get early access and you also get a free PDF copy of the final book when it emerges (to be clear, such books won't flow in monthly!).

Anyone who pledges on the Patreon has the option to provide comments, feedback or suggestion. The page has a Discord where I'm open to thoughts from supporters - and you should be mindful that such random thoughts have often had key value in generating new ideas and goals.

I have taken the approach of a base monthly amount rather than a per release pledge solely because it makes more sense. This is not a blog or article series; patrons will support, and receive copies of, brand new PDF materials of immediate value and use in their games of The Cthulhu Hack.

I have a few volumes in the pipeline in a varied state of progress that would be assisted by the creative support of Patreon. In a rough order of progress they are: 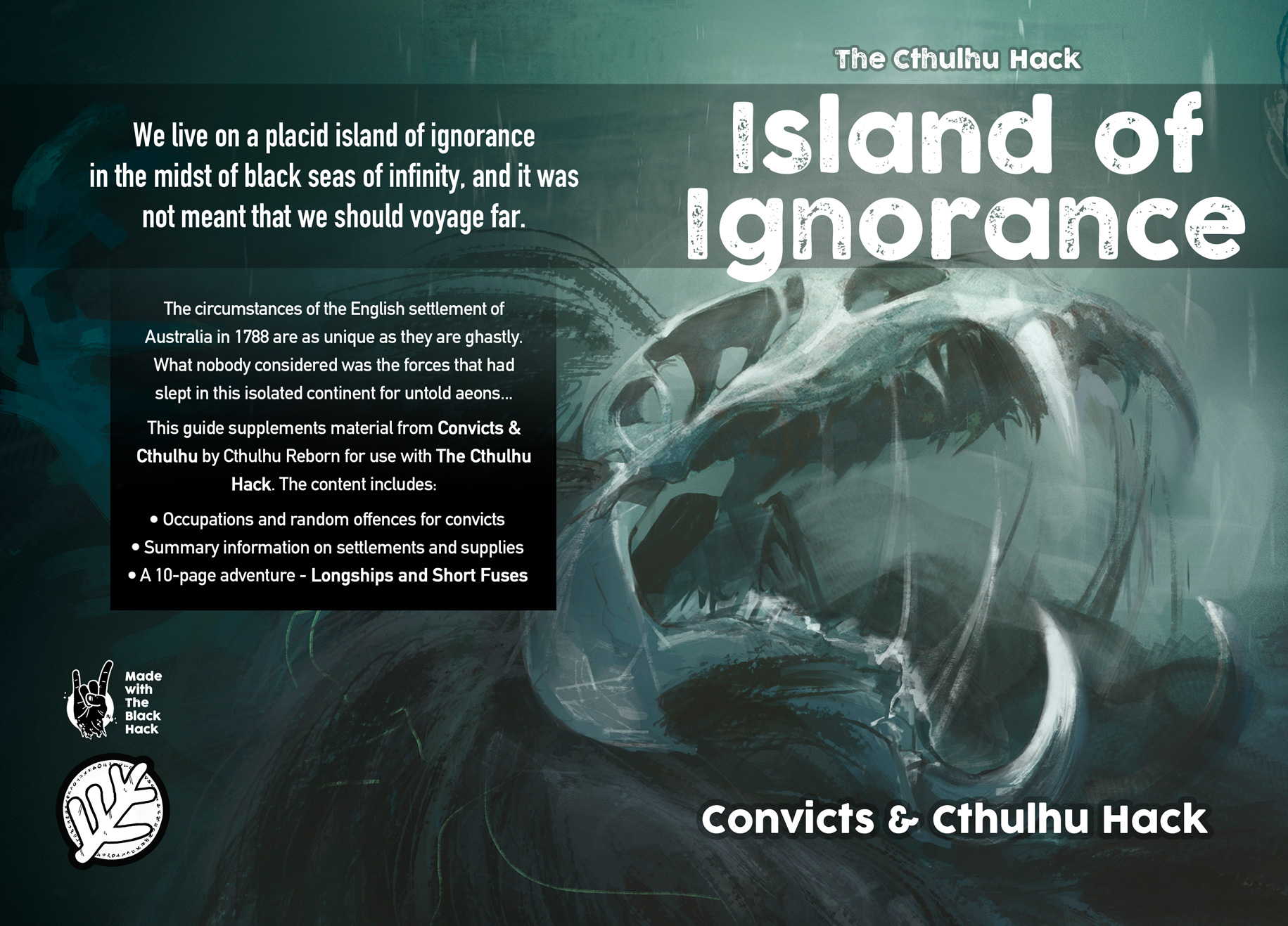 Island of Ignorance - A guide to using an existing setting, that of 19th century penal colony Australia, with The Cthulhu Hack. Cthulhu Reborn published Convicts & Cthulhu as a setting and I enjoyed reading it - there's something horrifying about taking a ghastly situation and then layering on the presence of the Mythos. With their approval, I was allowed to use elements of the setting material providing I didn't set a fixed charge for the publication - so, it was released as a Pay What You Want volume. To date, the PDF has been downloading just under 1000 times and there was a limited run at-cost physical copy sold.

I aspire to rewrite the core material here from scratch, to loosen the connection to Convicts & Cthulhu, but also to bring the mechanics into line with the current Core Rules. 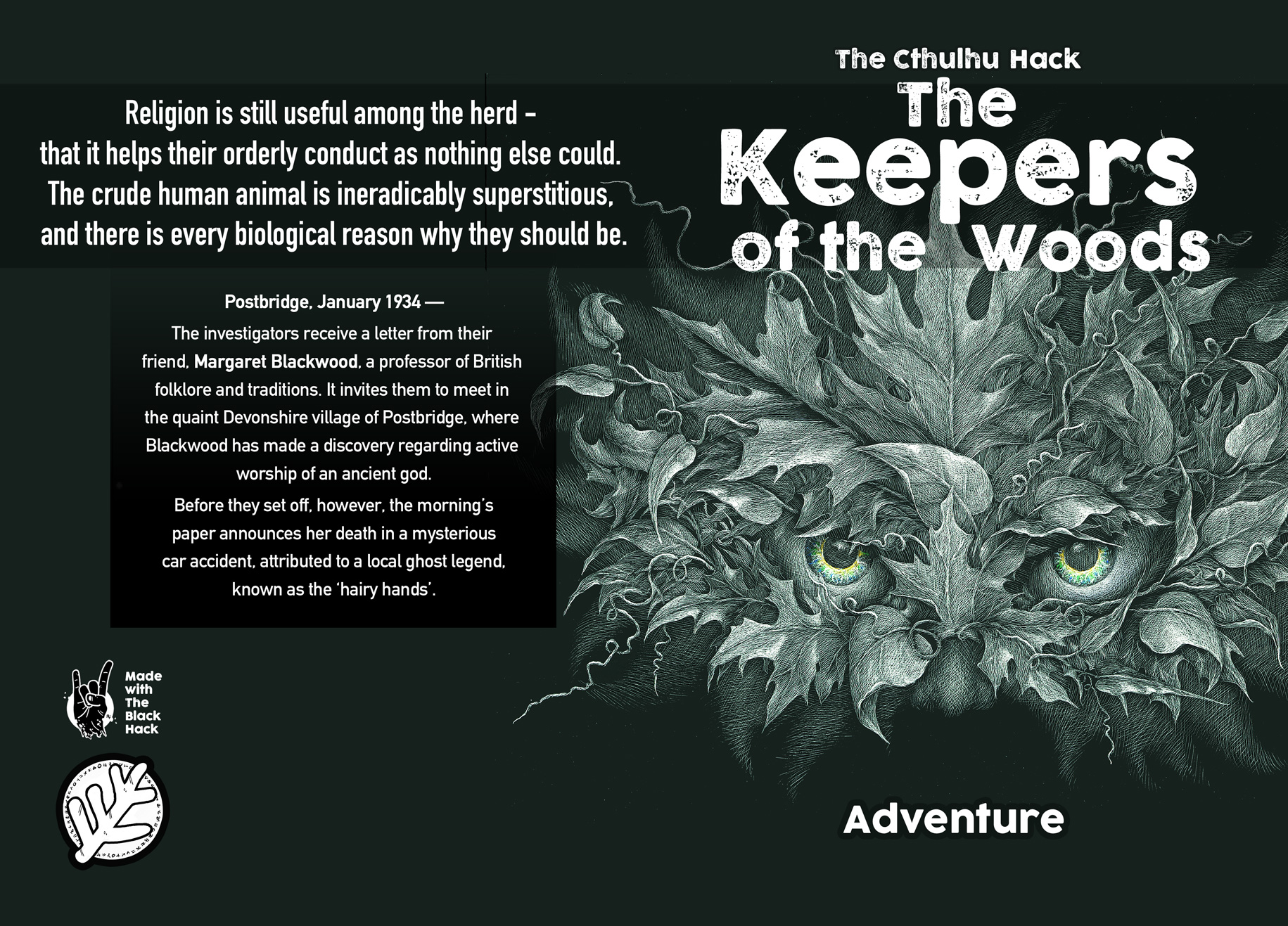 The Keepers of the Woods - Freddie Foulds wrote a great little adventure that I used in some of the early development and playtesting for the core system. Originally released as a one-page adventure, it got picked up by Pelgrane Press - but, I aspired to get the original simple version of the adventure brushed up and statted out specifically for The Cthulhu Hack. I got as far as getting the approval of both Freddie and Simon at Pelgrane, but then the completion of the task stalled. It remains high on the To Do list. 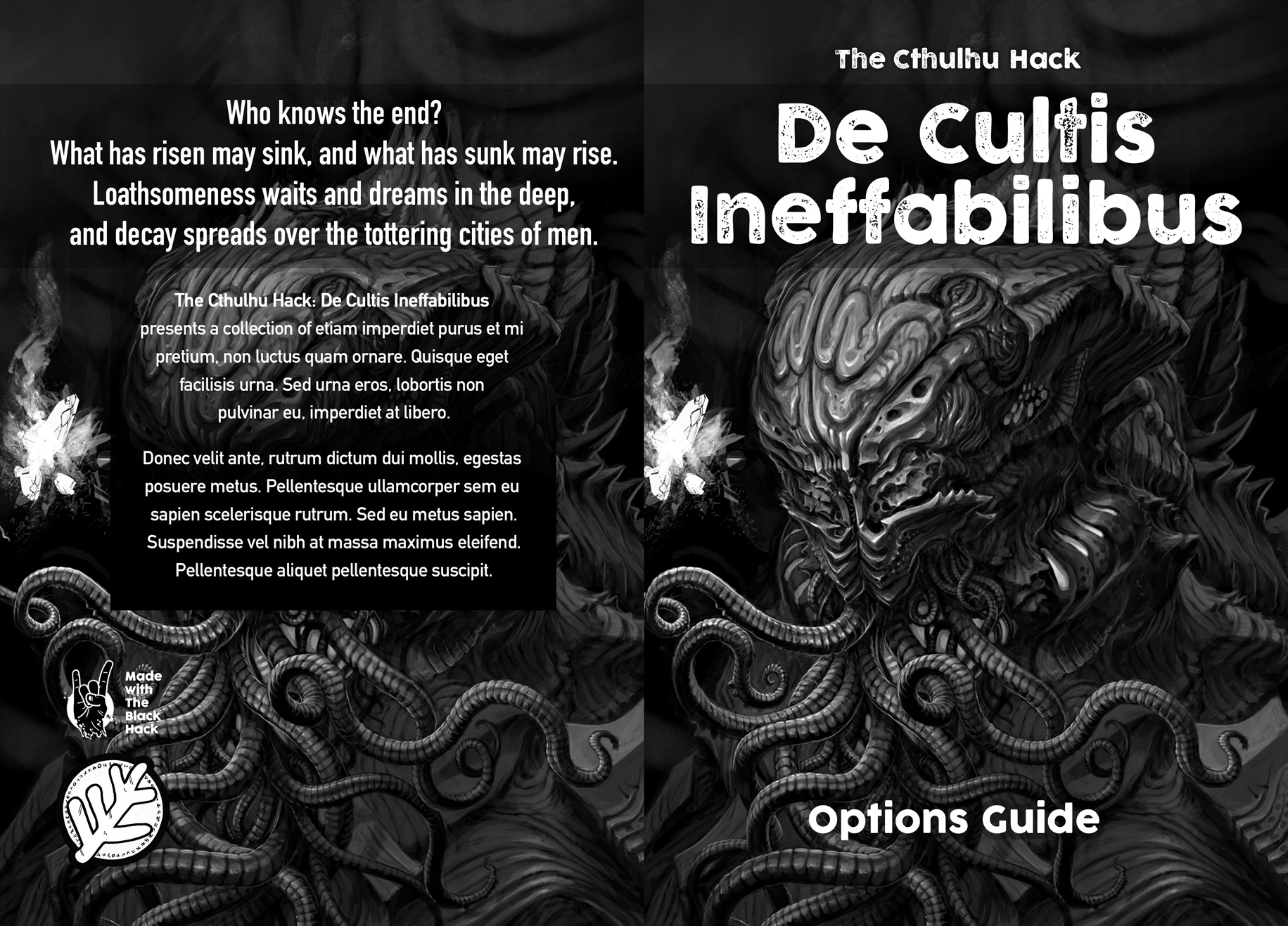 De Cultis Ineffabilibus - Originally code-named Unaussprechliche Hack or something along those lines, the book of optional rules and ideas surfaced very early on, in the latter half of 2016. In many respects elements that would have made up the content of the guide have crept into the Core as Optional rules. However, many ideas remain to be revealed in this dread tome, including extra options hovering in playtest, mechanics for additional creatures, magic, tomes, combat and more - with some material lingering half-formed as marginalia and scattered notes. 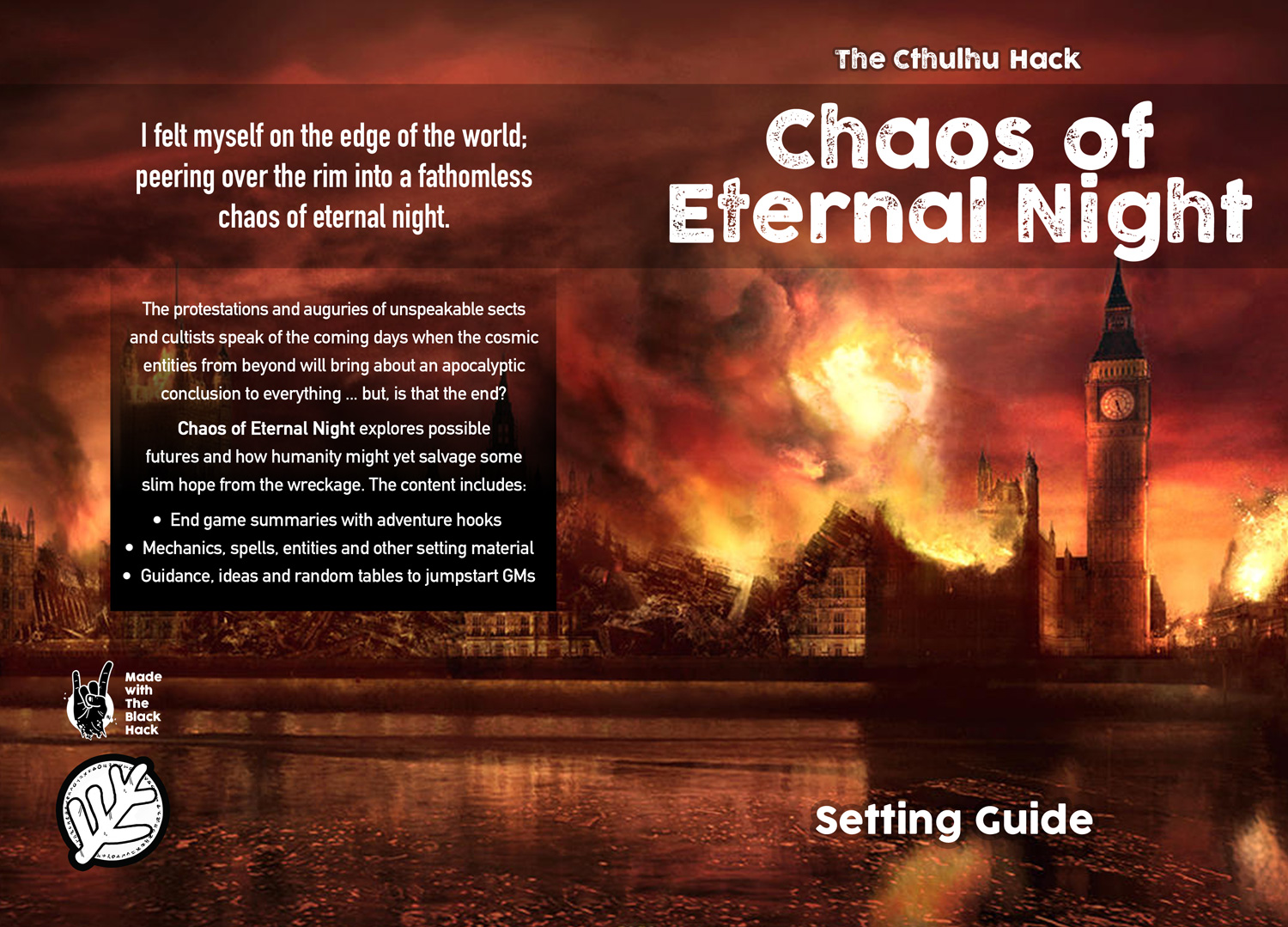 Chaos of Eternal Night - In the final outcome, humanity fell in the face of unspeakable and impossible power, sold out and sacrificed by raving fanatics and blinkered megalomaniacs. Gifted with near omnipotent power and blinded by cosmic indifference, the greater powers of the Mythos laid waste to the world... but, a spark of possibility remains. Short settings, adventure hooks and optional rules to handle a reality in ruin and the survivors who seek to save something at any cost.